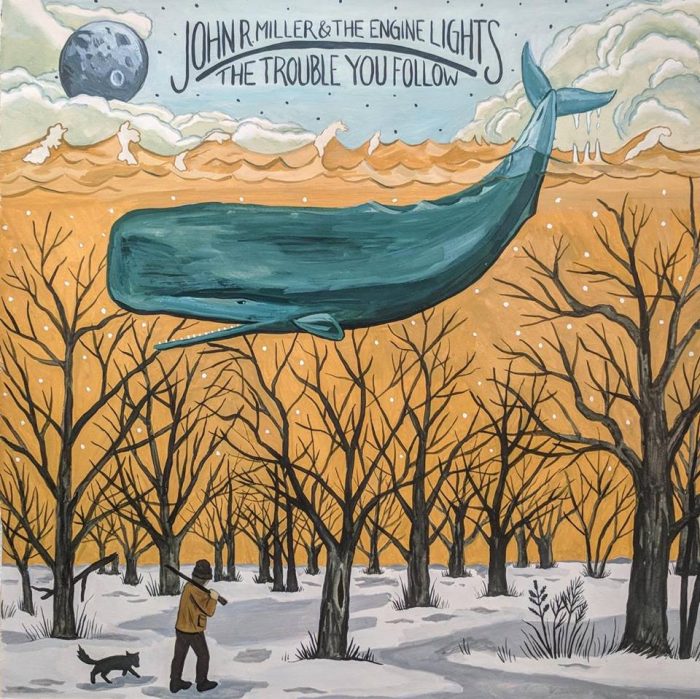 John R. Miller is back with his first album with his band The Engine Lights.  This record is titled The Trouble You Follow. It follows his solo 2014 release titled Service Engine.  While that record was a more stripped down acoustic album, this is a full band release. The band features Chloe Edmonstone on fiddle, Danny Tiat on drums, Matthew Metz on mandolin and Jason Summer on the all important pedal steel guitar.  Let’s take a deeper dive into some of these songs.

The album kicks off with the track called “Holy Dirt”.  This is a catchy tune that eases you into the proceedings of this album.  I love the line “Listen to your momma till you think you know better, Sometimes you gotta fuck up before you can fly”.  Truer words have never been written. Another favorite track is the pre-release single for the album “Red Eyes”. I love John’s acoustic playing on this track.  It sets up a nice backbone for this groovy number that has all the elements you would expect from a good Americana record.

“Been Here Too Long” is a faster track that pulls from some bluegrass influence and features some good pickin from Matthew Metz on the mandolin.  It’s one of the faster tracks on the album and is sure to be a barn burner at live shows. “How It Feels In The Light” is a slower tune that features the pedal steel sounds of Jason Summer heavily in the track.  If you like pedal steel, this is a tune for you. Finally, “Strung Out” is another slower tune that closes out the album on a somber note. It’s a song about being strung out on everything in every way possible and trying to deal with it.  This is another slow tune that heavily features the pedal steel work of Jason Summer. Jason Summer is a great addition to this band and the record’s sound wouldn’t be the same without him. I love the line in this one that says “Never caught sight of a train wreck that burns like me”.

John R. Miller & The Engine Lights have turned in one hell of a groovy country/Americana album.  The star of the record is John R. Miller. His voice and guitar playing are front and center. The band provides a great backdrop to fill out the experience.  If you liked the 2014 solo record Service Engine, this album builds on that experience and makes him more accessible to a wider audience. This album is a very country leaning americana record.  It even has influences of bluegrass and rock and roll. It’s a little bit of everything John has done in the past rolled into one cohesive project. If you are familiar with John R. Miller, you already know you will like this record.  You’ve probably been waiting by the mailbox or constantly reloading your favorite streaming service waiting for it to come. If you are new to John R. Miller, this is the perfect jumping on point. It’s an accessible record with a great sound that will draw in many new fans.  The Trouble You Follow is available everywhere Friday August 31st, 2018.

Favorite Tracks : Holy Dirt, Red Eyes, Been Here Too Long, How It Feels In The Light, Too Much Livin’, Strung Out