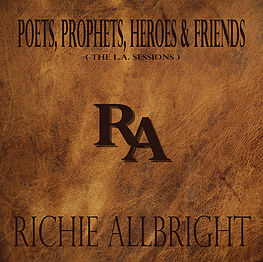 Richie Allbright is a name even I confused at first encounter with him, by now he is used to being mistaken for the Country Music Legend that wrote the Dukes Of Hazzard theme song and produced many albums for Waylon Jennings after Lincoln Chips Moman.

This man had a turbulent history just like many of his peers the likes of Billie Gant and Billy Don Burns, and his new album released in September of last year drops a lot of names however it remains relevant to authenticity and was a welcome addition to my collection. I must admit when I first met him and received the album and witnessed all of this said name dropping I was in yawn mode, because honestly I have lived it too. But within a few SHORT moments I my skeptical intuitions were pleasantly lifted from my chest, and I dissected his lyrics and his view of life.

I found more honesty and passion for Country Music in this album than anything I have ever heard by chance last year and the ONLY reason it missed my TOP 50 was because I didn’t get it in my hands until 2017…for THAT you my readers have my sincere apologies. The descriptive way this man sees Country Music is absolutely extraordinary and although it may be construed as copycat to his heroes at first the longer you listen I MEAN REALLY LISTEN he has his own different twist to the same format.

He has a nasally vocal delivery that one would identify readily with the Texas Traditional Country Music the likes of Ernest Tubb. However in 1994 when he was in his twenties he left Texas for Nashville and began playing at Gilley’s on Music Row singing for tips and began suffering from many addictions,so he left and came back in 2008. Much like I was finding out by 2006 Country Music was changing (with the exception of bands like BR5-49) and he sought out Legendary Producer Fred Foster to make his demo.

The TOP picture is of his first full album “If I’d Known Then” produced by Bill Green, and he recorded “Kickin Down The Doors” in 2011. Forward to today’s day and age and you will find people like me writing about people like him, because I’m going to tell you like “Boland And Birmingham” you will LOVE Mr. Richie.

I’m going to be truthful “Holed Up In A Honky Tonk” holding someone new is a well written hook filled revenge song that Country Songwriting Legend Dean Dillon wrote that is recorded VERY well and filled with more twang than anything that has slid across my desk in many months. I about dropped my coffee cup to run to the volume control to turn it up. I set my spottily on repeat and listened to this song over and over and over…this was a masterpiece of overlooked Country Music grandeur.

“I Lived To Tell It All” was basically a story song that many of us have deep within our lives, many of us have contributed to Country Music in our own way. Many a times I have attended funerals of my Country Music heroes and many times I go visit their graves. The story of him meeting Kristofferson in a men’s room taking a leak was absolutely awesome, you don’t tell a man you love him when he’s in a bathroom stall was one of the greatest lines in the last twenty years.

This album has twelve tracks and was produced in the Station House Studio in L.A. and it was produced by Ted Russell Kamp who plays for Shooter Jennings. Mr. John Schreffler plays some damn fine leads on this album as well.. Mr. Richie tells Gary Hayes Country he went there to record this album on an analog tape to make it sound like the older vinyls we all grew up listening to.

“Stronger Than Me” was a poignant and dark story about alcoholism from his eyes and why it has gripped his soul as tightly as it has. You can smell this stains on his breath emanate through the speakers of your computer when this song is spinning on your drive. This song is colder than my ex wife’s heart.

Country Legend Johnny Rodriguez guest appears on the Mexican laced Spanish song  “Carmen” that puts you to mind of Marty Robbins…wink wink.. once again you easily ascertain his many influences with all of these heroes that I also share with him. High upon my pedestals you will find those people perched as well, and if you pass on this album you have cheated yourself out of ONE HELL of a rocket ride.