Album Feature: Steep Canyon Rangers : Out In The Open. 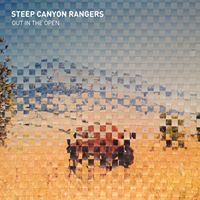 Album Feature : Steep Canyon Rangers – Out In The Open

The Steep Canyon Rangers are one of my favorite bluegrass bands and they have returned with their 10th studio album Out In The Open.  This album finds the band continuing to sharpen their skills and do what they do best.  There is a great blend of traditional Bluegrass and Americana here.  This is the second Steep Canyon Ranger only album to feature Mike Ashworth on percussion and the last album with Charles Humphrey III on bass as he left the band in December 2017.  Out In The Open finds the band in top form and delivering some memorable songs.

The album was recorded live in studio with many one takes on the record.  This includes the album’s title track “Out In The Open”.  This production technique creates a live feel to the record and the band does sound like they’re all in one room rather than in recording booths or recording different parts at different times.  I feel like it is important to capture bluegrass bands in an environment that is as close to live as possible as there is nothing like good live bluegrass.

This album does have a bit of a road trip feel to it.  One of my favorites is a track called “Let Me Out Of This Town” which heavily features fiddle player Nicky Sanders.  Another track that puts Nicky Sanders forward in the mix is “Can’t Get Home”.  This tune is a bit more country than bluegrass and showcases the blend of styles they are able to create.

The Steep Canyon Rangers switch things up a bit again with “Let Me Die In My Footsteps”.  This acoustic folksy and almost gospel tune is one of the quieter moments on the album but still hits hard like a good song should.  This song is very reminiscent of Marty Stuart’s recent hit “Wait For The Morning” in a good way.  I’m also a big fan of the track “Roadside Anthem” which starts out slowly, but swells and finishes with a beautiful and fast fiddle solo at the end.

This is the Steep Canyon Ranger’s 10th album that does not feature Steve Martin or Edie Brickell.  If you are only familiar with this band as Steve Martin’s backing band, now is a good time to jump in.  This band continues to get better with each record and this is one of their best releases.  I recommend giving this album a shot even if you’re not a fan of traditional bluegrass.  While Steep Canyon Rangers are at their core a bluegrass band, they always bring something more to the table with country and folk influences in their sound.  Out In the Open is available everywhere on January 26th.

Favorite Tracks : “Out In The Open”, “Let Me Out Of This Town”, “Let Me Die In My Footsteps”, “Farmers and Pharaohs”