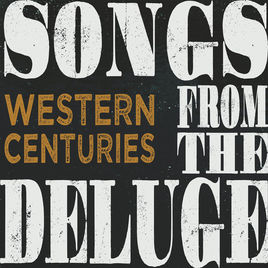 Western Centuries is a band like no other that I know of currently out there.  They have 3 songwriters and with 3 voices they often switch around between who is playing drums, lead and rhythm guitar on different tracks.  You don’t see that very often these days. You might get two singers in a band, but 3 with 3 distinct songwriting styles and voices? Cahalen Morrison (Country Hammer), Ethan Lawton (Zoe Muth and the Lost High Rollers) and Jim Miller (Donna The Buffalo) take full advantage of having 3 songwriters on the record and split the duties evenly across 12 tracks.  The country supergroup is back with their second full length album and they are masters of their craft.

One of the first singles from the album was “Earthly Justice” which was written by Cahalen Morrison.  It’s a song kind of about how no matter how bad things get, there is always another page to turn. It uses the failures of the justice system as a vehicle to relay that message.   I also love the pedal steel work by Leo Grassl on this track. He can be heard throughout the album and it really does add to the record. Another favorite is Ethan Lawton’s “Own Private Honky Tonk.”  It starts off with some good honky tonk piano by Eric Adcock and it has a killer honky tonk vibe throughout the track.

Jim Miller contributes the slower track “Rocks and Flame” to the album.  It has kind of a slow dance vibe to it. I love the B-3 organ here played once again by Eric Adcock.  “Wild You Run” is another Ethan Lawton track about straying from the path. Jim Miller contributes one of the more rocking tracks on the album “Time Does Not Rest”.  It’s still a slower number but features heavier guitars and a great solo.

The three songwriters of Western Centuries bring their various influences to the table here in a great way.  Each songwriter contributes 4 tracks to the album and they all have a distinct quality about them while sounding like the same band.  By using 3 songwriters as successfully as they have across this record, Western Centuries have accomplish something that Drive-By Truckers once did with Patterson Hood, Mike Cooley and Jason Isbell.  Songs From The Deluge is highly recommended if you love traditional country with big time singer-songwriter sensibilities. This album is out everywhere on April 6th, 2018.

Western Centuries – Songs From The Deluge (2018)