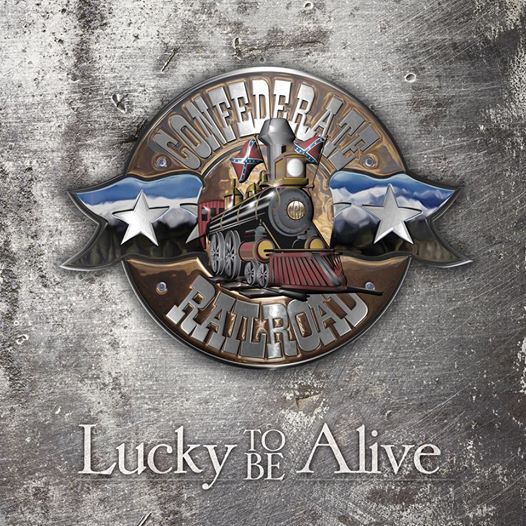 Confederate Railroad is back folks with their first album of all original material in nine years with “Lucky To Be Alive”. This album will be released to the public July 15th and will feature a newly recorded version of “Trashy Women” which is the twentieth anniversary of the song. This new version of the song will feature Country Legends Willie Nelson, John Anderson and pop country rap artist Colt Ford.

This album on vinyl will include a LIVE version of “Psycho Bitch From Hell”, and the track “Don’t Feel As Young As I Used To” includes some guest guitar work from Dan Tyminski from Union Station. The song “If I Ever Cross The Line” is extremely traditional and goes back to their roots from when they began in Georgia in the late 80’s.

Basically in the late 80’s this band was Atlantic’s answer to a famous four piece band on RCA that used confederate flag monikers in their album covers and that of course was Alabama. Of course CRR never reached the commercial accolades that Alabama did, I see this band as one of the most overlooked bands of the 1990’s era radio Country Music. They have always been a good festival band and often included in “package deals” for outdoor shows.

The track listing will be as follows:

Lucky To Be Alive Track Listing:
1. Lucky To Be Alive
2. Played The Game
3. The Man I Am Today
4. If I Ever Cross That Line
5. Trashy Women (20th Anniversary) featuring Willie Nelson, John Anderson and Colt Ford
6. Goodbye Song
7. Somebody Like You
8. Whisky And Women
9. Fast Cars And Guitars
10. Don’t Feel As Young As I Used To
11. Psycho Bitch From Hell (Live)
12. I’m Not Fallin’ For That

Danny Shirley is of course still the front man for the band and wrote seven songs on this new album. Along with him are Rusty Hendrix on lead guitars Mark Dufresne on drums and Wayne Secrest on bass. NOW to tell you about the steel guitar (you KNEW I would stress on this as important) it shall be Bobby Randall returning. Bobby took over in 2009 after Gates Nichols retired from the band in 2008 and died of a terrible cancer in 2009. I tell you what folks Nichols had Country Music in his heart and played until he was too sick to play anymore. In any event the band has continued to play over 100 shows a year and this album will followed up with a huge tour for the new album.