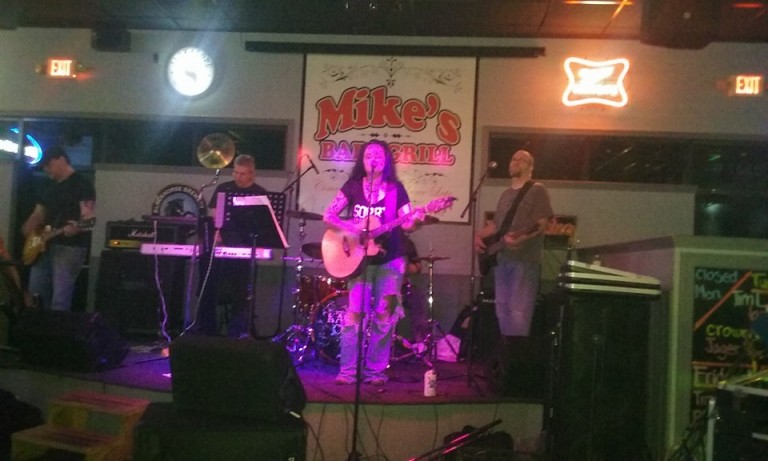 Hey folks I’m here in Clarksville Tennessee right down the road from my house at VERY nice venue named Mike’s Bar And Grill. This is the first time in a while I have had the chance to catch up with Kara Clark. She’s been doing more shows as of late and this is the first time I have ever been to this venue which has a truly nice stage area for bands. It has pool tables and good sized televisions for people as well as a full bar and a full menu with reasonable prices,later on I’m fixing to try a pizza.

Let’s see if this time she can play a full show without knocking out the power. She began the show with a Don Henley cover “Boys Of Summer”,and I believe this set she is doing right now will be mostly a cover show which is cool with me on a Saturday night with a Coors Light. Gary is just enjoying himself tonight and I hope to hear some good ones out of her. Later on in the evening she was asked to do all originals so I truly enjoyed the night, and I plan to stop there for a full meal in the future.

Her next song was a Hank Williams Jr. song “Dinosaur” which they played really well.That song was off one of my favorite (what I call mid-career) albums “Habits Old And New”. 1980 was not my favorite period of Hank Jr, as was his REALLY early stuff like the Cobo Hall Live album. I tell you what I never heard her play “Fire Away” by Stapleton not a bad cover there and she went into Tom Petty’s “Free Falling”.

She’s doing a pretty good variety of different genres of songs for the crowd tonight I m enjoying myself tonight this is a pretty spacious venue for the area and new and clean. Very  nice bar to come to and I hope they book more bands I want to feature because I’ll bring the website back here for sure. The only negative thing I’d say so far are the cokes aren’t refills so that’s why I opted for a beer tonight. When I first arrived it took a little while to be served however once I was the service was beyond exceptional and as the show went on I had more than one gal checking on me. Very nice and friendly staff I highly recommend coming out here for drinks.

As she’s playing “What’s Going On” she is going into some original songs tonight like Whiskey And Cigarettes. And speaking of smoking I want to stress to folks smoking IS allowed here however it didn’t really bother me much. She is doing her on rocking version of “Ring Of Fire”.

Shes doing the Drive By Truckers really well right now I’d say for someone that usually does more originals the band is doing a decent job of keeping the crowd into things here. Right now she’s playing a Candlebox song, The target audience here is in to the rock songs but responsive to them all in good fashion and are very polite here and when the band took a break there was an array of music being played. This is pretty much an every type venue that Clarksville needs more of. I wouldn’t go absolutely nuts over it however I wouldn’t tell you to not come here either.

Her second set started with “Simple Man” that included some real good lead guitars and the band did that one really well. She followed that by “Magic Man” by Heart and believe you me they really gave this song hell and I’m pretty impressed the solos and timing For such a different song. Her longtime keyboardist David Walker sang some songs for us it was nice to see him again, I remembered him from Altamont. Speaking of which the very first public launch of my website on this new server was in fact Kara Clark at Altamont. They did some really good John Mellencamp songs another good crowd song here.

“Relapse” is my favorite song Kara does and she is doing that song right now and with a full band it always sounds really good followed by some more Tom Petty “Last Dance With Mary Jane” that David is singing. Shes doing another Drive By Truckers song called “Where The Devil Don’t Stay” and followed that with a Hank 3 song called “Low Down” . She did some Jason Isbell and some Rolling Stones “Honky Tonk Women” which I really enjoyed very much, nailed that song and the crowd liked it.

Well, anybody that knows me and knows me well can tell you I enjoy original music and I know my bands. She’s no exception and I’ll pay a cover to hear her play original songs. You can certainly tell the difference in comfort between them with just about any local band around. From my request she played “The Band The Bartender And Me” another of my favorites she does, and she played “Preacher’s Hands” and “Lonely”.

“Bulletproof” was one off her new album “The Key” which she had a big party for at Douglass Corner Lounge one of my favorite places for songwriter nights with Travis Harris And The West Coast Turnarounds. She also played “Devil Don’t Cry” and “Hey God”. I’m glad she’s doing more shows and getting back out there and I’m glad I finally got to come out to this venue. And as she played “Southern Hospitality” and closed her show with “Man In The Box” by Alice In Chains I truly had a good time.

That’s about all right now folks I’m VERY BUSY getting prepared for the Muddy Roots Nashville Boogie festival Thursday, this will be a ten article series beginning tomorrow night. I’ll be up working all night Weds and into Thurs in getting ready to see Chris Isaak and Woody Pines at the OPRY as well as Reverend Horton Heat and Big Sandy and MORE!   THEN I’m off to Kansas City for my OWN STAGE at Westport Roots Festival where I have BILLY DON BURNS and MORE!

It’s a VERY BUSY year for yours truly.