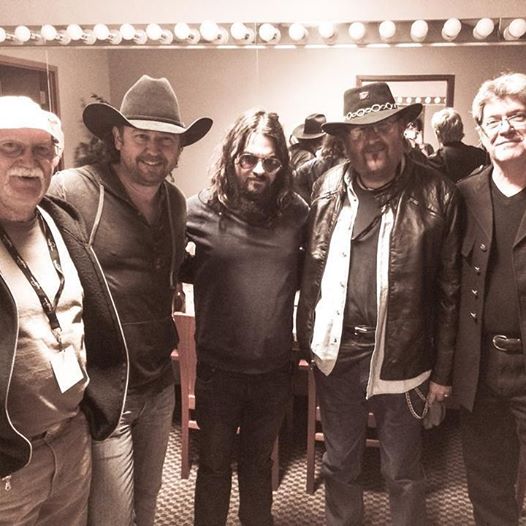 Guys I have been so busy on this website focusing on albums and festivals in 2017 I haven’t caught up with all the current “news” for you. I HAVE updated my local shows listings and some of the aftermath of Americanafest and so much more so be sure to check out my homepage and see all the new articles.

Shooter Jennings is always busy on the road and behind the mic with his new podcast Beyond The Black which is in it’s fourth edition right now. It offers some personal insight into his album Black Ribbons and also some of his thoughts on things. And Shooter if you read this Thanks for everything buddy you and Miss Misty BOTH, for everything y’all have done and said about me.

I have listened to the first two episodes and I’m astounded at his level of research and knowledge on things, I never thought he was a dummy by ANY means but he has some interesting points of so many subjects. It kind of gets us closer to HIM as a person and if you know him you’ll know he always has time for everyone and has said some really nice things about me and I have a mutual love for him.

One thing that other media outlets have reportedly mistaken was that Waymore’s Outlaws were hanging it up with a farewell tour, apparantly this isn’t true and in fact SHOOTER is going to be playing HIS last shows with the band (possibly for now). He stated it’s been a fun three years but he wants to work with his L.A. Band more now, and Waymore’s Outlaws will continue as well. I know there is a big show planned at the V Club in Huntington…GREAT VENUE there trust me!

Now then this is from a official BCR Media email I got which explains the release of Black Ribbons on election day 2016 and I didn’t want to mess anything up on it. And you can damn sure bet you WILL SEE SHOOTER up on the Top 50 for 2016 and his album he produced for Billy Don Burns.

The extremely limited pressing of the Black Ribbons Ultimate Edition will be available for pre-order (signed or unsigned, your choice, for the same price) on Monday, Sept. 26th at 11 a.m. exclusively at BCR Media!! Full track listings will be announced same day. Get yours before they sell out, which they definitely will!! Keep an eye out for us on Twitter at @bcrlosangeles. Also on Monday, we’ll be announcing record stores that will carry Black Ribbons Ultimate Edition.