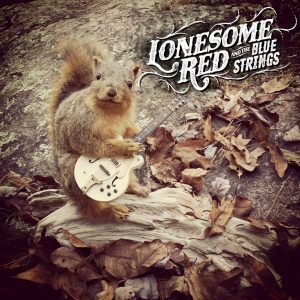 I been posting like a madman about next month, my final big job of 2016 Crooked Smile Music Festival which will happen October 14-15th in Winchester Indiana. So here’s the deal folks I been doing album features all year and I been impressed with the many albums I get sent. I have decided to be reclusive about these select few albums and combine them in a special PREVIEW of some of what’s to come when you buy your ticket to the festival.

Lonesome Red And The Blue Strings:

I mean it doesn’t get any more special than my “Sconnie” friends Mr. Eric and Miss Amanda Bestul from Iola Wisconsin, along with Mr. Ryan Zylka and Mr. Kevin Moore they make up this Traditional Country band. Mr. Eric plays guitar and steel simultaneously and he formerly played with our good friend Mr. Owen Mays. I met Me. Eric through him at a show in Nashville a few years back.

This album was short and just a taste of what’s to come I believe as they do more experimental music and truthfully I cannot wait to see what they have in store for us at the festival. The album began with the Lonesome Red Theme and went into “Man Of Constant Sorrow”.

Two more songs that Mr. Eric wrote called “More Than A Nickel” and “Whiskey Rain” make up the album other than a great cover of Alan Jackson’s “Mercury Blues”. I tell you what nobody does it better than Mr Eric and Miss Amanda when it comes to traditional Country music in this area. They’ve played countless hours of shows and they are deeply rooted within their knowledge of the classics and oldies. I’d rank him up there with Mr. J.P. Cyr when it comes to love of the old stuff like Rex Griffin and Riley Puckett.

The Kepone Cowboys are five guys that play Country-Rock-Metal and all kinds of stuff ro0lled into one big ear splitting album. Unlike Stump Tail Dolly and others that liken them they have a pedal steel and I’ll say this I cannot wait to meet Mr. Mark Smilor because I want to start a NEW series that could involve him.

Mr. Gary Fitzgerald Jr, Mr. Justin Wilcox, Mr. Bernie Hodges and Mr. David Chappell make up the band that plays hardcore Country and makes references from everyone from Hank 3 to Cash to Dwight Yoakam. In fact they cover “A Thousand Miles From Nowhere” quite well.

“Overdosed In Hampton” was a good song along with “Burning Down The Candle” and I highly suggest this album All Hat No Cattle to be added to your collection NOW. I’ll be featuring this band next month.

Folks this man gave me his album in hand at Muddy Roots this past year and I didn’t open it until a few days after and right away I noticed that the Urban Pioneers helped record this album thus I was instantly excited to pop it in my player.

All ten songs on this album were written by Mr. Jesse himself, and honestly his songwriting was not bad at all, I enjoyed the simple Honky Tonk Country he plays. “Those Honky Tonks Are Calling Me Again” opens up this album is a steady pace of beer drinking music, and the next good songs was “Blood Sweat And No Tears”.

One of the best songs on the album was “Leave Them Pills alone” and “The Justice Tree”. The other songs on this album were pretty darn good and I’m looking forward to covering his set next month at Crooked Smile Festival.