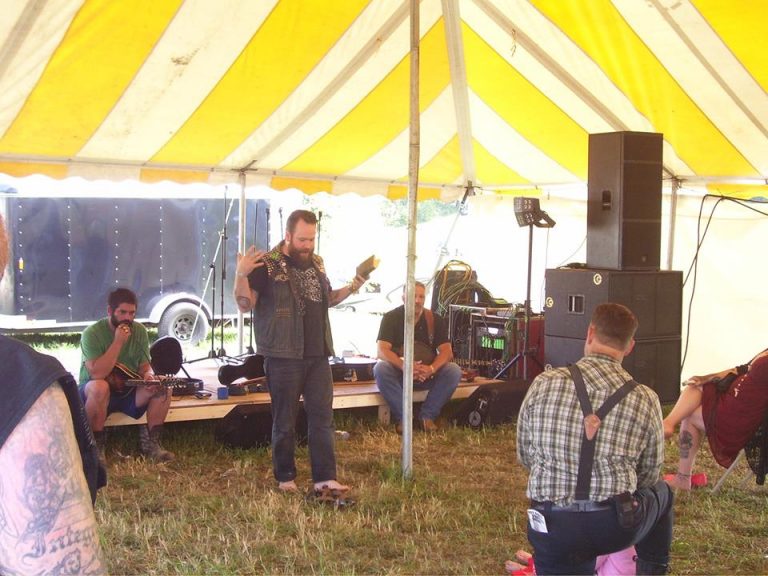 This year at Muddy Roots Music Festival Mr. Jason declared the little tent stage AKA stage 3 was an open mic and when we all arrived on Thursday there was a sign up sheet. The stage was ran by Mr. Nick and Miss Kimberly of Cracker Swamp Productions, and Miss Devilyn Carver and her husband Aaron. They are going to be teaming up for future projects as well, and as far as I know it shall be open mic next year as well.

Smokestack Relics are two brothers from Colorado that I will be covering in a few weeks in Indiana, Mr. Cameron and Mr. Collin played the little tent stage on Saturday. They played dirty swamp rock music with songs like “61 and 49” and others like “Cocaine For Breakfast” and another called “Give Your Soul To God”.

Adam Lee was a great performer I first heard with Matt Woods many years ago and to be honest I missed most of his set due to the Hackensaw Boys BUT I did catch “See You All In Hell”. His new album called Sincerely,Me is available on his website by clicking on his name up there.

Jeff Shepherd And The Jailhouse Poets played on Sunday as well and I did catch some of his set. “Wayfaring Stranger” “Carolina” began his set, and he continued on with “Hold On”.
He also released an album this year that I had Mr. Jahshie P from the Moonrunners tribe review. He also played “Gone” and “Katie”.

S.S.Web AKA Steering Ships With Empty Bottles is a punk rock and Roots Music band from Milwaukee. Now folks I was at this stage on and off all weekend so I might have missed some people and I’m TRULY sorry if I did I tried my best to remember everybody that played it.

Also on Sunday morning I got to participate in my own thing when we had a small Sunday morning worship service with our friend Ben Whitehead who gave a really nice sermon. One truly fun thing about Muddy Roots is the respect and (and of) the diversity of people there. Not everybody goes to music festivals to get obliterated and wasted, some even like to attend sobriety meetings which also take place there. I believe I had 3 beers the entire weekend, I haven’t much need for heavy drinking anymore.

All in All I thought that stage 3 needed it’s OWN article because all weekend long it was doing it’s OWN special thing and for that I applaud the entire crew. In fact I applaud the ENTIRE CREW of Muddy Roots Mr. Chris Cahill, Miss Kelly McNoldy and Miss Amber and Mr. Herbert for their hospitality and help. Without them Mr. Jason is just one person and it takes a BIG team to do what Muddy Roots does, not just one man with a dream. Honestly in 2010 I myself didn’t think it would grow into the Mecca that it is today, the first year there was about 300 people if I remember correctly.