Could My Album Of The Year Be A LIVE Album? BCR Releases MORE RARE Waylon Live. 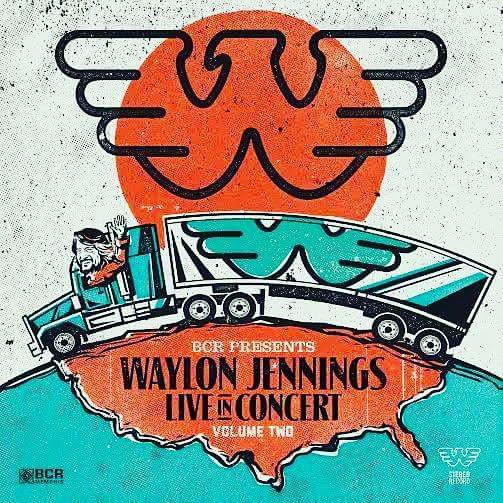 Well folks I’ll tell you WHAT here I am at home on almost my birthday enjoying my bag of stuff from Record Store Day Black Friday, YES there are TWO Record Store Days now. As always O’l Shooter Jennings didn’t let us down with BCR (Black Country Rock his label). Friday morning Record Stores nationwide opened up for business like mine did and Volume 2 Of the Waylon Jennings Live albums was unleashed upon us with only a few thousand copies nationwide.

This was a white vinyl only it will NEVER BE released on CD or digital download EVER. The album has twelve tracks on it and is recorded from Omaha in 1979, the year that Shooter was born. I don’t really delve into the business side of anything so I can’t tell you anything about that part of it only that it was produced by BCR and J.D. Myers also contributed to it, that’s not really my place to make official statements in that area.

I CAN TELL YOU that this album is on the verge of becoming my number ONE album of 2015….I cannot promise that because darn it that Alan Jackson album is truly good and I think even Shooter himself enjoys most of my top 50 list for 2015 when I release it. His taste is as eclectic as mine, in fact I find out about a ton of good music from him on a personal level. I remember a Muddy Roots I was talking with him and he says “Hey Fishgutzzz” I too love them G Damn Gallows.

In the next two years we will have been brought closer to Waylon Jennings than ever, with the book that Terry Jennings is releasing next year which you can read about HERE we will read more stories about his days of the Outlaw Movement and more. And earlier this year Waylon Live Volume 1 was released at Cracker Barrel stores.

Volume 1 had more vocal interaction with the audience and jokes and stories, as this volume had mostly all music. It did have some really good guitar and steel solos and it did feature Waylon yodeling for a brief moment. The crowd was more vivid and responsive on this volume, and the album dove directly into “Don’t You Think This Outlaw Stuff”.

He changed some of the lyrics to a few of the songs like “Good Hearted Woman” and this album has one of the best versions of “Amanda” and other songs like “Honky Tonk Heros” off his Billy Joe Shaver album. Folks this album is just absolutely twelve songs of pure Waylon Jennings grit and glory from one of the greatest eras of Country Music that ever existed.

The crowd roars as he blows into “Mamas Don’t Let Your Babies Grow Up To Be Cowboys” and they respond in great delight to the background vocals in “Amanda”. Like I previously said it was truly the greatest recording of it I have ever heard. Along with “Slow Rollin low” and “Waymore’s Blues” the rest of the album was well produced and recorded in superb fashion and you’ll have to hang around to see if it makes my number ONE SPOT.

1. Don’t You Think This Outlaw Stuff Has Done Got Out Of Hand
2. Are You Ready For The Country
3. Waymore’s Blues
4. Good Hearted Woman
5. Iv’e Always Been Crazy
6. Come with Me
7. Slow Rollin Low
8. Amanda
9. A Long Time Ago
10. Iv’e Been A Long Time Leaving
11. MaMas Don’t Let Your Babies Grow Up To Be Cowboys
12. Honky Tonk Heros