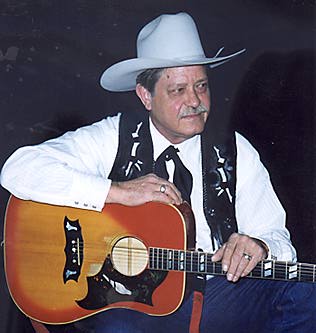 I been working on the website all day and I have had a few beers and I have been checking out new music all night. I JUST GOT a call from a dear friend that left a voice message to me saying Jimmy Eaves lost his battle with kidney failure out there in Texas. He was a prominent radio figure in Traditonal Country Music in the local Texas music scene with his wife Miss Jenny. He also was guest on the Midnite Jamboree and the Opry, amoung many other Country Music outlets.

Jimmy was born in an Oklahoma town that no longer exists and also from a small town named Poolville Oklahoma. At a very early age he was given a guitar and taught by friends to play Hank Williams songs, and began performing at churches. In 1955 after his hero passed away he was under the impression Country Music was not going to move forward and he enlisted in the service, and in 1958 he was discharged.

Drought and depression were prominently what he returned to when he came home and he did farm work until the Legendary Panther Hall opened in 1961. He was very involved in the historic Country Music venue until his children were born, and he decided to quit the business to raise his children and be a father. For nearly twenty years Jimmy did not perform or record music to be there for his family.

After his children were grown, he began his musical career again. He formed a band in the late 1980s and called it the “Pure Country Band”. He recorded the first album in 1990. A tribute to Hank Williams, Sr., it was called “Jimmy Eaves Sings the Hits of Hank Williams”. He was also performing in the Fort Worth Stockyards at a club called “The Longhorn Saloon” for about six years. Other CDs followed; one in 1997 entitled “Jimmy Eaves Sings Pure Country” and another in 1999 entitled “Bringing Back Memories”.

In May of 2001, Jimmy and Frankie Miller released a country gospel CD called “Frankie Miller and Jimmy Eaves Singing Gospel Music the Country Way”. Jimmy says it was a pleasure to work with such a talented person as Frankie Miller, “The Black Land Farmer” and they also tour together on most shows. They have performed with many country acts such as Johnny Bush, Darrell McCall, Willie Nelson, Claude Gray, Floyd Tillman, Tilmon Frank and others over the past few years. Jimmy and Frankie were guests on “The Midnight Jamboree” at the Troubadour Theater in Nashville, Tennessee with Darrell and Mona McCall also at the original “Ernest Tubb Record Shop” on Broadway in Nashville, Tennessee with host George Hamilton IV.