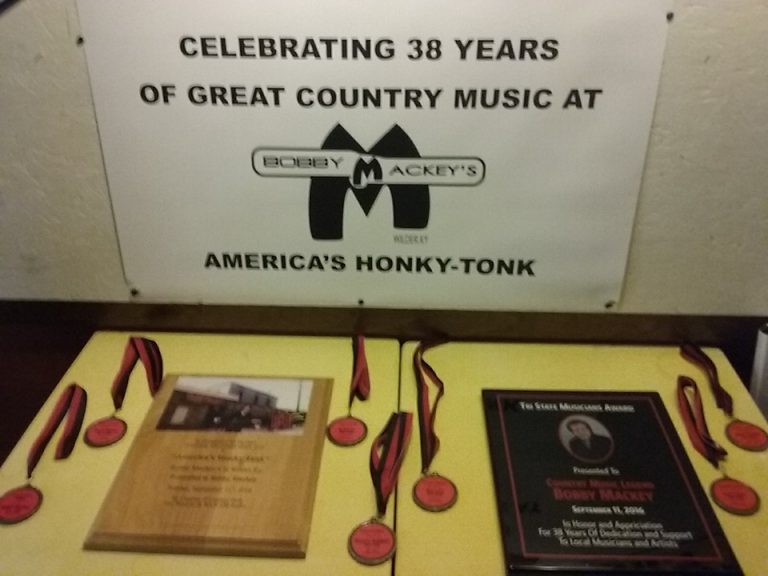 I took a small break from my Muddy Roots articles work to take a short trip up to
Cincinnati Ohio to come to Bobby Mackey’s Haunted Honky Tonk as Mr.Bobby is
presented with A lifetime achievement award for 38 years open for business and his
contributions to Country Music as a whole.

I could sit and write an entire article about him and his role in my youth as one of the
many overlooked country music artists I sought out as a child amiss the ocean of
mainstream music society offered. He was one of the few artists on Lefty Frizzells label
in his younger days before opening his world famous honky Tonk in Wilder Kentucky
right on the Cincinnati city limits 38 years ago.

Of course I had to stop at Skyline chili and get coney dogs, life on the road is hard stuff
and Cincinnati is good to me and has a great local music scene with many bands I
dearly love. Today we just had an open mic session and many people played before Mr.
Bobby Hayes welcomed us and introduced tonights house band, and my good friend
Luther Jackson emceed tonights event.

The house band was Willie Faulkner, Rick Jacobs, Donnie Keitch and Ron Fitzgerald and
they played classic country music for us as we enjoyed socializing with one another as
we got ready for tonights special guest. They played “Swing’n Doors” and “Crazy Arms”
along with “White Lightning” and “He Stopped Loving Her Today”.
Guitars Cadillacs and Hillbilly Music along with Fast As You and Sing Me Back Home
before they brought up Mr. Tiny Terry Wogan to perform “American Trilogy” , “Mustang
Sally” and “Going Where The Lonely Go”.

Harry Alexander performed “The Fireman” by George Strait as well as “Only The Lonely”
and “Walking The Floor Over You”. They didn’t have the electric bull going and this was
mostly personal friends and associates here on his behalf to celebrate him. I tell you
what there is a table upfront of ladies that have been coming here for the entire 38
years it has been open.

You know I haven’t saw any ghosts or witnessed any paranormal stuff here tonight but
I took the ghost tour last time I was here and we had fun. Mr Bob Hudson was next and
he performed “Rambling Fever’ and “Silver Wings” for us as we moved along. Next they
featured Jimmy Cash as he played “Folsom Prison” and “Ragged Old Flag”. And once again
the house band played” The Bottle Let Me Down” and “Neon Moon”.

Along with a newcomer from Wisconsin Kylar Kuzio who played the John Conlee classic
“Rose Colored Glasses” and mother young man David Berry that wrapped up this first
segment of music here tonight from some great artists that signed up to play. I’m not
sure how long tonight will last but I cannot stay way too late due to a four hour ride
home to work tomorrow.

Bobby Mackey’s band came out to entertain us first with some songs as Mr. Bobby got
to sit up front at the head of the room while they played “That’s Why I’m Walking” made
famous by Stonewall Jackson. And my God they did “Look At Us” perfect I mean they did
the signature John Hughey steel guitar intro just right.

Mr. Tom Winkler is telling stories of years ago about this iconic Honky Tonk joint and
how it has come time for him to be given his award for his contributions to Country
Music. He has been operating this iconic venue for 38 years and has recorded more
classic country music than I can name and providing the trip state area with true real
honest Country Music. On behalf of the tri state area and Garyhayescountry.com I am honored to report on his receiving this lifetime achievement award.

For one of the first times ever he is getting to be a part of the audience and listen to his
Best Damn Band perform for HIM and now Miss Kaylar is playing the Bobby Mackey
classic “Johanna”. Mr.David Berry is now playing “Jesus On The Wall” with a guitar that Mr.
Bobby ordered for him and sent him.

Mr.Bobby has given his wife and manager along with his band members loyalty
aawards. He was telling us the story of how he acquired the bar and the lady that gave
him the key to the building. The mayor and the Fire Chief of Wilder Kentucky are here
to help present this award to him. There are folks who were hanging around this bar
when it opened all those years ago.

Chuck Rich has been playing steel guitar for 25 years and played steel guitar for Kenny
Price. He told stories about Willie Brown and Mr.Ernie as they got their awards and
who he called the younger one of the bunch Mr. Harold from Mississippi. His wife Miss
Denise also got awards for running this business as Mr. Bobby plays the music like he
said he doesn’t micro manage he does the music. And the man who personally invited
me his manager Mr.R.J. also got an award for his services to this establishment as well.

All in all it has been a truly great trip up here today and Mr Bobby was also made a
member of the Wilder Fire Department and told he now has to respond to fire calls. It
has been a true honor to witness this event and it was nice to be in the area again and
see all my Cincinnati friends once again.