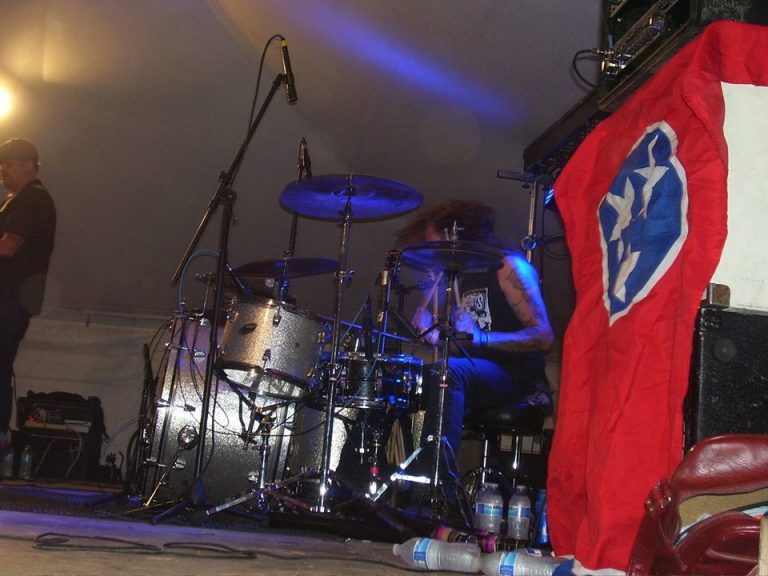 Well folks as the night closed in upon us for the first day of music it honestly was chilly at night, I mean people had blankets on..that’s an uncommon sight for this festival. I’m usually sweating buckets and red faced from the sun, I brought body wipes extra socks and rain gear. I was thankful I didn’t need any of that stuff man what an enjoyable time we all had.

The Blackfoot Gypsies are just good old fashioned rock and roll from Nashville Tennessee and they are a four piece band. This is the first time I have had the chance to cover their set and it was getting close to my dinner break but I did manage to check them out. I don’t have the greatest camera in the world and some of these shots will be taken from Miss Elaine Holmes I’m always usually busy studying the music folks I leave the photos for others like our buddy Dave Flewwelling.

This from their website: With 4 years, 4 releases, and countless miles under their belt as a 2 piece band, Zack Murphy and Matthew Paige have called on fellow brethren Dylan Whitlow (bass) and Ollie Dogg (harmonica) to join forces and help expand their already wide spectrum of American music.

Some of the songs I remember them playing from what I know of them and have researched of them were “Dance” and “Don’t Wanna See Your Face”. They also played “Rock It Up” off their first album “Dandee Cheeseball” I had to go get something to eat before the last three acts of the evening and go say hello to more people, you know me bouncing all over the place!

Hillbilly Casino is honestly NO stranger to this website and if they ARE strangers to your favorite music website they need to hang their heads in shame. These four guys absolutely tear up the stage with pure and raw energy, I don’t know where the heck they get it from…maybe it’s all the Jager. In fact Mr. Geoff got a Jager dispenser from the band for his birthday, man I tell you what I have had MANY battles with bottles of that booze true enemy of diabetes!

Mr. Ronnie Crutcher on guitars, Geoff Firebaugh on bass, Matt Armn on drums and Nick Roulette on lead vocals make this band up and trust me that’s enough for a HELL of a set that started with “No Toll Taken” and some songs off Two Step Windup like “Shoe Leather” and “The Hole”. I’ll tell you what The Hole is a JAM and it’s my second favorite song they do..my favorite is Big Dan..that was not in this set.

“One Cup Beyond” was their hopped up coffee song that doesn’t bring up “Heartburn And Heartache” at all. If I can go out of set list order here and I often do, they played “Iron Fist” and it sounded and pounded people! It’s like hellbilly rockabilly all over the place during their set.

“Jibber Jabber” was next followed by one of the BEST marketing schemes I have saw in independent music their song 80085 that says Boobs on their shirts! Almost as clever as S.T.D. with Stump Tail Dolly. THEN when Mr. Ronnie whups out the banjo for “Violets In May” you think it’s over but NO they have to thump the place over with their signature song “Tennessee Stomp”.

Slim Cessna’s Auto Club is a band that will roll through Nashville on December 8th at the Exit Inn and you should go catch their show because it was really good. I didn’t catch the entire set there tonight I had to go on a short break before the next and final band that night.

I did catch “This Is How We Do Things In The Country” and “Children Of The Lord”. I truly wanted to get to see more of their set this night but I had the hungries..my tummy done barked and I had to send a brat down there to check things out, so I wanted to take the time out to bring forth one of the TRULY GOOD food vendors there.

Music City Wienery is the best meat on the street folks, Mr. Chase and his wife and crew made the BEST hot dogs and brats. Now I’m going to tell you my dear readers I AM A PICKY EATER, I could send you a leg long list of stuff I don’t eat, and he bent over backwards to satisfy me as a customer and treated me as a friend. Veggie dogs for the vegans and fritos chili in a bag…yeah they did that and I truly loved every bit of how he treated us.

Miss Elaine Holmes again with more picture credits on this portion of the event, ok so go thank her for letting me use her property for some of these articles folks. Go appreciate the document keepers like photographers you know a LOT of people kind of underrate them at weddings and music events. They think any dummy can use a camera and that’s not the case, they are media crew too and they help me do this.

The Calamity Cubes were the very first band Mr. Jason ever booked for the first Muddy Roots and I remember it well, 2010 and I was VERY shy and didn’t talk to anybody really. I went to see Kara Clark and wound up loving MANY great bands there, and in the 7 years I made MANY MANY friends AND birthed a website there.

The four of them busted up the cool night air with classic tunes from their catalogue like “Daisy” and “Bottom’s The Limit”. Now later on I’m going to tell you about Mr.Brooke Blanche’s solo music as he along with his band mates are doing their own thing as well. There were rumors of this being the last Calamity Cubes show and I have NO knowledge of it being true or false but I DO KNOW this show was amazing.

“Devil In Her Eyes” and “Same God” flowed through the big tent like the Muddy Roots gospel this night as pretty much the whole entire attendance has their eyes locked on the Cubes all night. Children and adults both packed the tent tight with electricity of music. Perhaps the greatest two songs they do were “The Battle Of Hair Ribbon” and their last song “Empty Bottle” which is in my opinion one of Roots Music’s most iconic songs of all time.

Another classic song they performed for us was “Deliah Rose” and “Lilly Belle” this set was truly worth staying up late for as I knew I had to cut Saturday night short for other business ventures and I wanted to conduct them off the festival site because they involved a different brand, if you are going to do it..do it right!