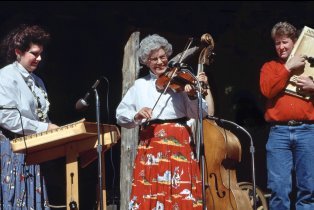 It is with a heavy heart tonight I come to you in report that Country Music has indeed lost a wonderful Icon tonight as we say goodbye to Ramona Jones, widow of Louis Marshal Jones whom was indeed “Everybody’s Grampa”. He was mine for decades and if you are a Hee Haw fanatic or lover of vintage Country like me then he was yours too. And it didn’t bother him a bit, in fact he would have insisted.

You know I often stress the importance and relevance of “The Kids” of the Legends and how their performances tarry forth the aura of their beloved family members. It goes much much farther than Shooter Jennings and Hank Williams 3, it is flowing from grandchildren and nephews like Mr. Phillip Steinmetz who performs with his Sunny Tennesseans and plays music very much like Grandpa Jones being family. Some of them have their own style and music, and upon this the Legends never die only their earthly body is taken.

In 1946 she married Grampa and in 1969 she shared spots with him on the longest running syndicated comedy show in television history Hee Haw. This show spawned so many Country Music stars in it’s run and holds structure for Country Music history in many ways. It brought comedy and music together for the mainstream people to hear the likes of Conway Twitty and the vaudeville type comedy of Grampa Jones. She was proficient in many bluegrass instruments as is the entire family and helped usher love and family values into my generation and many before and after mine.

Folks the greatest skits of Hee Haw fame was when Grampa and Ramona Jones would play cowbells connected to their feet and hands to many songs. I am proud to have this sort of music and entertainment a part of my youth and to be honest the Legends of Country Music pretty much raised me…can’t you tell?