Night Two Of Music In Kentucky. 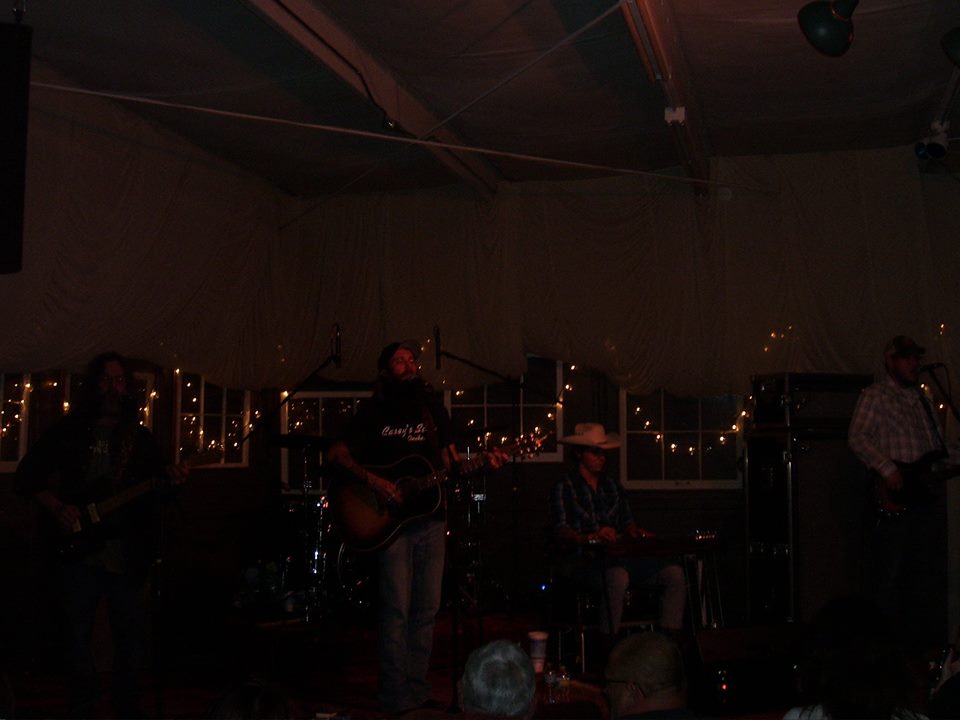 Well Friday night’s partying at the Spillway didn’t end until late and the next day we headed out around 3 to visit with Kenneth Marr and then we went out to the White Squirrel Brewery for a local music series which each artist got to play three songs. This show was loaded with many people I am familiar with and before the other show we stayed and enjoyed some music here.

My friend Clovis Draper from Virginia that I have been wanting to feature for some time now played first. He is playing his set right now here and opened his set with a song called “Rain” and followed that with an American Aquarium cover called “Bettin Man”.

I have spent the weekend enjoying the sound of his guitar and his company along with Mr. Kevin and Miss Linda Vaughn. We spent more time in bars and venues all over Kentucky than ever. We ate some great meals and listened to vinyls all day Friday while visiting. He closed his set with a song called This Heartaches Free.

Kendra Hope began her set with Tumbleweed that she played last night, and she played a Hank Cochran song Don’t Touch Me. She is playing the best version of Hank 3 Country Hero’s I have ever heard. I think Shelton himself would have approved of her doing that song. We had the honor to see her play two nights in a row, her album is really good and she is developing her own sound while clinging onto traditional roots under one hell of a good mentor and manager. I personally think Miss Kathy will do wonderful things with her for the proliferation of this precious genre.

She wrote “Tumbleweed” when she was twelve folks…twelve! This young lady “has it” and she “gets it”. She reminds me of myself when I was her age, she holds close to the Legends of Country Music and I just cannot say enough good about her.

I was busy chatting with old and new friends and getting prepared for our next show but I did get to see Shane Tutmarc perform “Idle Hands” which he did a pretty good performance of. You might remember me cover his set from Spillway some time ago.

We had to leave to head over to the Warehouse At Mt. Victor to see the Texas based road warrior Cody Jinks And The Tone Deaf Hippies. His latest album “Adobe Sessions” last year was met by me with high acclaims and even though he is ignored by major media he is truly a successful independent act.

He filled the place up pretty good and his band was TOP NOTCH in every way, they tore the roof off the venue. He is what I consider “The Big Three” of the underground bands I love the most, those being him and J.P.Harris and the Tough Choices and Whitey Morgan And The 78’s. All those three bands have some pretty good well oiled machine capabilities to entertain you.

He opened up with a song from Adobe Sessions called “What Else Is New” and went into “David” and “Mamma Song” . He had the place dancing and drinking on into the night with songs we can relate to like “Mamma Song”.

He played a really good cover of “Lonesome Onry And Mean” before going into an older song “We All Get By” and one of my personal favorite songs “Curse The Sky”.

He played “Ready For The Times To Get Better” which is a Crystal Gayle song and followed that by “Wanna Be Alone” off his album “30” from 2012, and followed by “We’re Gonna Dance” off the newer album.
I missed one or two songs because I was buying merch and talking with people I met there, we were all having a good time at this show!

He played a really good version of Merle Haggard’s “Think I’ll Just Stay Here And Drink”. He played a song called “Folks” and played “Letters And Cigarettes” which they did a really good job on. Like I said before the band was absolutely KILLING the stage tonight with leads and timing of impeccable perfection.

Now folks when the new album came out my new favorite song became “Cast No Stones”. He blew the rooftops off and broke the walls down when he played this song tonight! And then he played a good version of ‘Loud And Heavy” which is another good song.

He closed his set with “Hippies And Cowboys” (of course) and another good song called “Rock And Roll”. I tell you what he also did a really nice meet and greet and greeted EVERY FAN that wanted him. EVERY member of his crew knew their job and contributed to the workload, while Mr. Cody shook hands. He didn’t run into any green room or turn ANY person away.

If you go to one of his shows I PROMISE YOU he is worth the door fee and spending some money at the merch table.