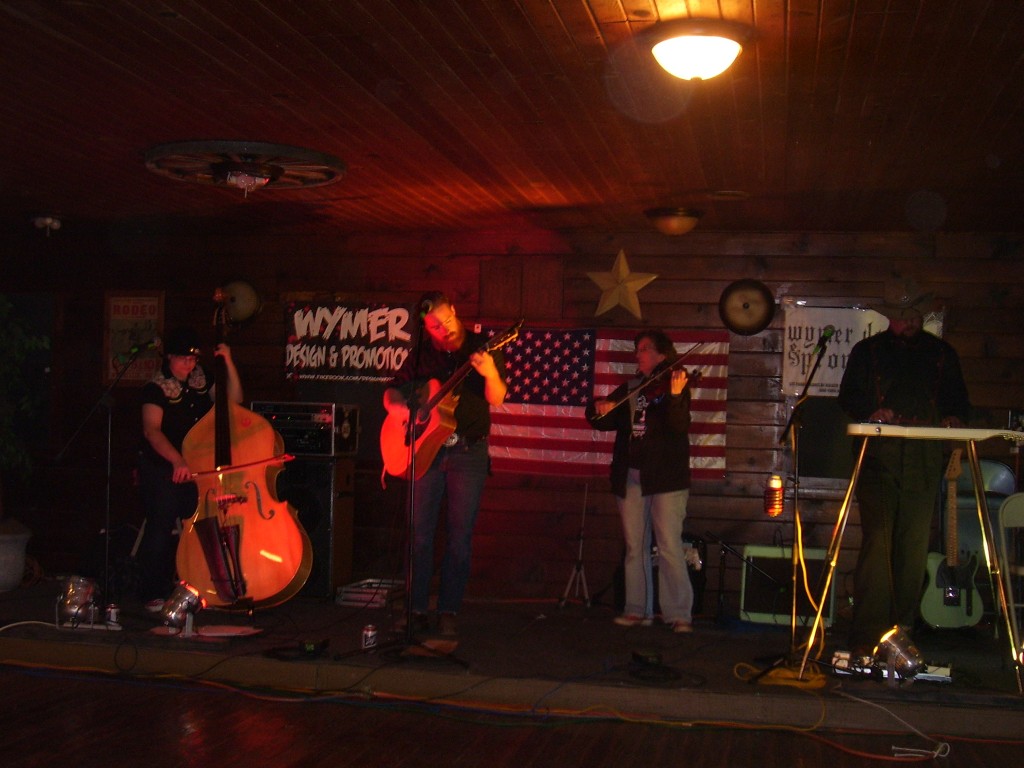 So after a really good night’s rest at the hotel I woke up starving and had a really huge breakfast before heading back to the campgrounds to cover the last day of the festival. The first act I got to cover was my good friends Mr. Eric and Miss Amanda Bestul now known as Lonesome Red And The Blue Strings along with Mr. Ryan Zylka. Now Mr. Eric and Miss Amanda were the band that played with Mr. Owen before we lost him to Hillbilly Heaven and I finally got to catch up with them to see what diabolical scheme they had up their sleeve to carry on that Traditional Country Music I KNOW they both live for.

This is it, THIS is their newest project and I tell you what…it is a GRAND project indeed. I met him for the first time several years ago when he and Mr. Owen played The Slider House, and I got see Mr. Eric show off his ability to play upright guitar and steel at the same time reminiscent of the great Junior Brown.

They played a set of cover songs to give us a feel of their intentions once they release an EP of original material which shall be soon. They began with “Mama Tried” and one of my favorites “Seminole Wind” by John Anderson. By December they should have their EP completed and ready to purchase and I’ll keep close tabs with them to feature it.

They continued with “Good Timing Woman” and the Jamey Johnson song “in Pictures”. Quote of the whole festival was made by Mr. Eric “Hearing people clap for Waylon Jennings makes me happy”! As they continued on to play a Billy Joe Shaver classic “Georgia On a Fast Train” and “Simple Man” they finally hit on another pinnacle in their set I enjoyed.

They played A-11 in the style of Johnny Paycheck…before he took on the Paycheck identity, I’ll give you a short lesson..Donnie Lytle got his stage name from a boxer in Chicago named Johnny Paycheck and in 1964 he legally changed his name to that. Before he did he performed under Donnie Young and wrote “Apartment #9” for Tammy Wynette while he played steel as a Jones Boy for George Jones. A-11 was the first charted hit he had under the moniker of Paycheck and it was later covered by Buck Owens and several more.

They closed their set out with “Fire On The Mountain”, Alan Jackson’s “Buy Me A Mercury” and “Man Of Constant Sorrow”. What a GREAT START to a GREAT festival folks! I was already VERY excited to see more music.

The Piss Poor Players I finally got to cover their set on this website. I have been close several times but never caught the opportunity to get there, they are from the Wisconsin and Michigan area.

Mr. Dustin opened up their set with “You’ll Never Understand” and another song I recognized called “Piss Poor”. Honestly before coming to Crooked Smile I knew very little about this band, and it was really nice to get caught up with them.

As they continued their set with a pretty good song called “Sin Eaters” and another called “Take That Walk” they truly entertained us today as did everyone else. I was getting geared up for more of the new bands I was about to cover and doing two things at once but I did get to hear them play “Watch The Sky” and ‘Stone Sorrow”.

“Cold Dead Fingers” was their next song along with “No Good Until I Die” and they followed that up with my favorite one they play called “Never Gonna Change”. They closed their set out with a song called “reach Out” by the Dad Horse Experience.

Matt Olson whom plays for Filthy Still played a solo set and although I did not catch the first song I did catch ” Real Eye In The Sky” and ‘Motorhead”. I also caught another song he played called “Dinosaur Shit” which wasn’t a bad song, and I thought that was a pretty good set.

This is a Pittsburgh based band that I enjoyed before the bands I’d been waiting for the whole weekend. “Saddle Up” and “Who I Am” were two more songs I got to catch along with several other songs before closing their set with “Southern Comfort”.

The last band I caught of the afternoon was called The Drunken Cuddle which was a three piece band from Denver Colorado. Now I didn’t get to catch a lot of their set because I was getting things ready for the last three acts of the festival which I shall touch upon in my last installment of this series.

Their drummer Katie Marie Sternig really breathes a lot of life into the band with her talent on the drums. She’s a firecracker on the stage and the whole band sounded really good I recall a song called “Naked” and another called “New Mexico”. I was visiting with many folks and eating and getting geared up for the next few sets!