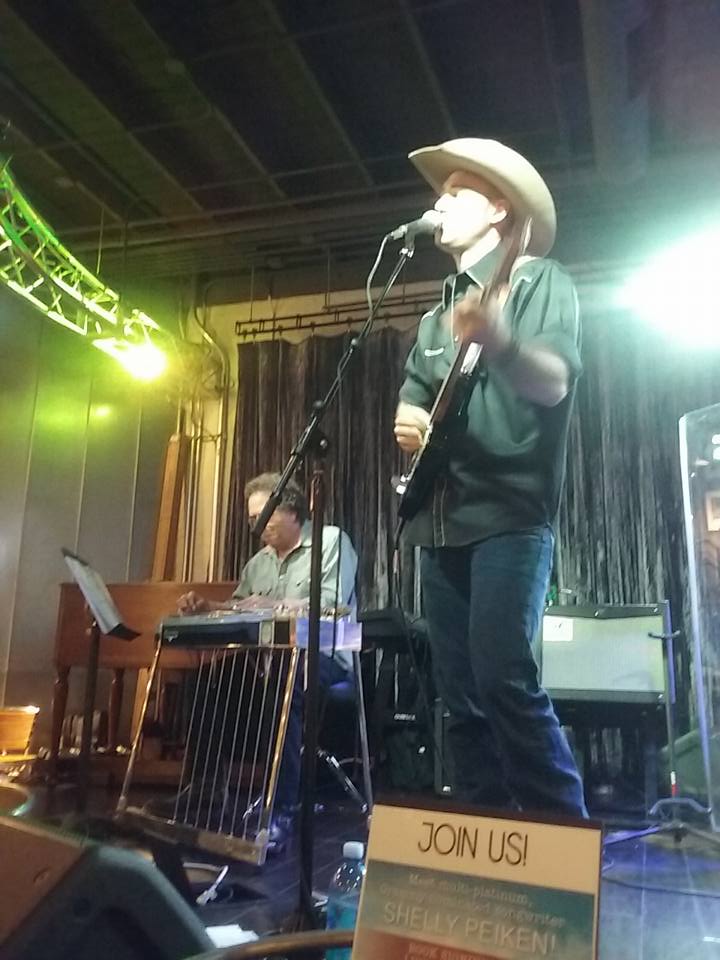 So I started the evening around 3 at Jack’s Bbq over on Trinity Lane even though I was planning on hitting up Ernest Tubb’s record shop for some vinyl records and there’s a Jack’s across the street. I like the one on Trinity Lane better especially when I went it’s not as busy, and despite some popular arguments with me I enjoyed it.

Tyller Gummersall was my first stop tonight on 12th Avenue right across the street from the Station Inn lies a store called Two Old Hippies. I have never been to the venue and honestly it’s a high end store. I didn’t check out any of the items or prices as I’m not really into that sort of thing, BUT the stage area for live music was AMAZING. The ONLY problem I had with this place was there is NO bathroom, I was severely taken aback by that (honestly I think it’s a health code violation) but with medical problems it’s not a venue I could stay at for a LONG period of time because of that.

But I’ll tell you what folks I went down there for one of my artists that WILL BE on my TOP 50 albums of 2016..yeah I just ruined a little part of that list but I HAD to praise this young man for earning that spot. His music is impressive, real and more down home than ninety percent of anything “mainstream”.

He is from the Colorado area and his brand new album is called “Long Ride Home”, trust you me he is really good and this album was well recorded and produced by Lloyd Maines..so that should be enough proof. The album has all original material on it and all of the songs were really well written.

“Turned Around World” was his first song he played along with “This House” and another I didn’t have on my study list I usually carry called “What Have I Done”. One of the better songs on his album is a song called “Rocky Mountain Man” because it had some really good steel guitar solos in it live and he represents his Colorado home well. The pride and love he has for traditional Country Music shines through in his lyrics and his stage presence, and he is one of the real deals in the independent music scene.

“Lucky Guy” showed off some pretty good lead guitar licks and he followed that with a nice ballad called “Better Than You Found It”. That song right there is better than anything you’ll find in arena shows and FOR SURE better than anything you’ll hear on the radio. He covered “Move It On Over” with more justice than alot of those on lower broadway, and once again showed off more lead guitar licks with a song called “Kiss Me”.

This story here is a prime example of how real this young man is. He plays a 1952 Martin and he stated that he plays the same model as Willie Nelson’s 1969 Martin N-20 called “Trigger”. His grandfather bought it at a garage sale for ten dollars and it was then owned by his uncle and handed down to him, and because of it’s age it falls out of tune quite often but you know what..none of us minded.

He played a song called “Country Music Junkie” which was truly an awesome song with well written lyrics that I hope he records in the future, and he followed that with “How About You”. His version of Merle Haggard’s “Silver Wings” was equally enjoyable and he closed this set with “Country Boy”. I’ll tell you what folks this man WILL be featured more on this website and he and his music have a home here on Garyhayescountry.com