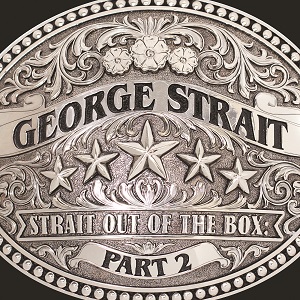 Right in time for the holiday season (and every website’s Top 50 or 100) powerhouse George Strait announces the release of his part 2 box set Strait Out Of The Box Part 2. He officially retired from touring in 2014 but he does do some appearances in Las Vegas, however the tickets are high dollar.

This box set will be available November 18th exclusively through Wal Mart only and contains 56 tracks, including 26 No. 1 hit singles, other radio hits, 18 album cuts and two new songs, including Strait’s new single, Goin Goin Gone. Strait personally selected the songs that make up the new collection. The follow-up to the 8X platinum-selling Strait Out of the Box from 1995, the new collection culls tracks from Strait’s career spanning from 1996 to the present.

He is the most-nominated artist in the history of the CMA Awards and was the first country music artist honored with Billboard’s Legend of Live Award. Strait was named CMA Entertainer of the Year in 1989, 1990 and 2013, and ACM Entertainer of the Year in 1990 and 2014. He is also a member of the Country Music Hall of Fame, yet he has never needed to run around any stages or dress funny or have multi-million dollar explosions. In fact he is more well known for standing in one spot and just plain flat out singing his simple Country Music.
I do not specifically anticipate this to be placed on my TOP 50 list for the simple reason that most of the material is not officially new, however it will most likely get an honorable mention in any fashion. Right now even with live albums I have a choked full list of albums from 2016 that I KNOW you will absolutely enjoy.