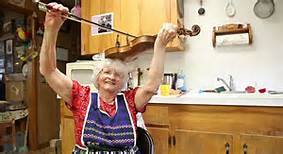 Folks this past August The Grand Ole Opry Legend Mike Snider arranged to have a true living legend perform on the Opry Saturday night show, and sadly I missed it but as I rest from a sickness today I feel the need to write about this today, especially because October 21st she will celebrate being 100 years old.

You know other websites are out there that feature the types of bands I do and they all write articles bashing the Opry and consistently touch on the nasty things that management is doing to snuff out the Legends on it, and although I agree with them I think to waste time on the negative is a loss to people like this woman because nobody is focusing on the positive things the Opry does.

Miss Violet comes from the state of Missouri deep within the confines of the Ozark Mountains and has been a staple member of the Silver Dollar City theme park in Branson music scene for many years now. She comes from the community of Yellville Arkansas and in Branson she still entertains people with the very fiddles she built with her own hands in a style that nobody has ever rivaled in her 100 years.

She known for balancing a fiddle atop her head and playing a lightning fast speeds sometimes while clogging in tune, and has built by hand 74 fiddles in her tenure. Because of this she is often referred to as the “Whittlin’ Fiddler” and will be playing a huge birthday bash in Branson next week.

Arkansas fiddler Tim Crouch found her and contacted Mike Snider who arranged to bring her onto the Opry stage this past August during his segment he hosted as he usually does. She is one of America’s first nationally known fiddle players and fiddle makers, and while she does not remember the Opry’s first performer a fiddle player named Uncle Jimmy Thompson she does remember the early days of Roy Acuff who came to the Opry in 1939.

I thought it was truly a blessing to the Opry and Country Music as a whole to recognize this icon in her own right and bring forth to future generations of fiddling youth the undisclosed Legends that most people don’t know exist. And like I previously said you won’t hear about events like these from many other sources.