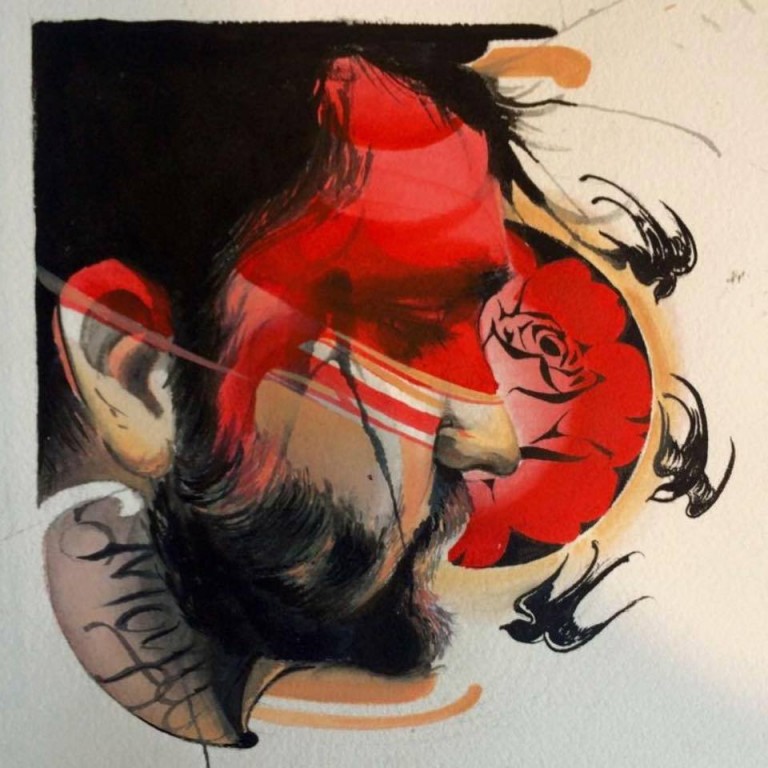 I met Jeff about three years ago. He sent me a demo for play on Outlaw Radio Chicago. He was the first artist I have ever booked at MoonRunners Music Festival off of a demo, and I began to push for him hard after my first introduction to his music and his personality. After meeting, we became more than just friends, but partners in crime. He was also my personal in studio performer on Outlaw Radio Chicago for a very long time, debuting new songs, drinking with Stevie Lee and I, and just being a solid fucking dude. Our bond is strong and I love him to death.
Two years ago, folks compared Jeff to Hellbound Glory, or more specifically, Leroy Virgil. Both wrote about hard living, drugs, love lost, depression, and suicide. At that time, Jeff welcomed those compliments, as Leroy was and is his favorite songwriter and inspiration. But, these days, Jeff Shepherd has out grown any comparisons. He is far and above the single best unknown song writer out there today. Period.

First things first, I have heard many different versions of every song on this record. Jeff and I worked for about a year on a Solitary Records release that never saw that the light of day, and I have seen him perform countless times. This will not be a biased review. The words I say are true and I have believed in this man for a very long time. The completed record made for my label was not released because it wasn’t great, we just both knew there was more inside of Jeffrey, and he proved that with the release of his self-titled album. While, I am bummed my label’s name is not on it, I know it was necessary for this to happen. Jeff began a newfound friendship with the great Matt Woods, and decided to invite Matt as a producer to try to cut an album once again. They took shelter at Shed Studio’s 55 in Knoxville, TN over most of 2015.

Sticking to being honest, I believe this album really begins on track four “Sink Down”. I am not speaking ill of the opening tracks what so ever. “Gone” is in fact a beautifully written number about new found love and belongs on this album. “Jukebox Junkie”, in my mind, is a bit hokey with the electric guitar intro that can resemble a song on mainstream radio. It is still catchy and well written, but, not what Jeff was born to do.

His more upbeat songs are just fine, but, his ballads and sad songs are what he was born to do. Every artist needs upbeat songs to make albums and live shows flow, and Jeff does his job as a musician to make that happen. “Tragic Love” is another great upbeat song, and I think folks will love it, but when I put in this record now, I start with song four. I am by NO means saying you should do the same, because you will miss good songs. I am one man, and this is simply the way I prefer to listen.

“Sink Down” has been a live staple for the band since their inception, and it is a classic story of living hard and enjoying every minute of it. I can write this entire piece on lyric quotes by Jeff, because they are that damn good, but, I will spare you all and let you discover them yourself. But, “Sink Down” includes the lyric “I live my life like my hearse is double parked, after last call on the wrong side of town”. What the fuck Jeff? How the hell do you come up with these amazing lines? Jeff is not one to brag about drinking and drugs. The man lives his life, and these songs are not fiction. He is not proud, and rarely glorifies the lifestyle. But, goddamn, he knows how to write about a hard living life.

“California” is the first ballad on the album that will make a grown man cry. Jeff’s lyrics hit hard and makes you think, and makes you wonder. We have all been in these spots of regret, depression, and solitude. Jeffrey just knows how to write about them, and for this I applaud him.

“Ghosts” and ”Forever Young” are both upbeat songs and they thrive, keeping this record moving along nicely. Both songs are intense and are some of the live sets best portion. The band really shines on these tracks, and Andy Westcott’s electric guitar solo on the latter song rips through and leaves you wanting more. Longtime Jailhouse Poet, Marco Sassman is simply an amazing banjo picker. His licks and rhythm will leave you breathless if you pay close enough attention. Liz Sloan was hired on for her fiddle style, and for obvious reasons. She shines on this record, as she does on any recording she is a part of.

The last four songs on this album are my favorite. All very depressing and cringe worthy on the way they shred your heart.
“You know I tried like hell not to turn out like my old man. But, looking at our two pictures, side by side, it’s hard to tell which one I really am. I only miss him when I’m drinking, now I’m drunk all the time” More unbelievable lyrics, this time from the standout track “Hold On”. If this song does not become a single somehow or another, than Jeff is getting screwed. As will America. People need to hear these songs. “Broken” is another song that should be a single.

“If I’m incapable of loving, like you say that I am, why are you crying every day wishing I was still your man”. A relationship gone wrong, but, with neither side wanting to take the blame. Who is the one who is broken? That will never be known. But, we have all been there, and this song will remind everyone of that.

“The Worst Withdrawal” is a song that has had a video on Youtube for many years now, and what really put the Jailhouse Poets in people’s ears. It is also the song that brought the Leroy Virgil comparisons. Is that a bad thing however? Who wouldn’t want to be in the same sentence with that man? A song comparing a woman’s love and body to drugs, (“Your kisses filled with cocaine, your hugs like morphine”). At the time this came out on Youtube, it was instantly getting views like crazy, and there is a good reason why. It is a good thing that the band decided to re-record it and include it in this collection. It’s a wonderful song.

“Son” closes out the record and for good reason. There is no coming back from this song after listening. A deeply heart breaking and somber song about both of Jeff’s parents dying in the year of 2009. Whether Jeff is performing for a crowd of 20 or 200, he silence’s the crowd every time with this one. If you have ever lost a parent, or loved one, this song will hit you VERY hard. It is perfectly written and simply can’t even really be reviewed. It is personal as hell, but will relate to every listener. This is as powerful as a song can get. Speechless.

Overall, this is a nearly perfect record. I needed to borrow a website just to review it, because it is just that damn well done. Rachel Kate pops up here and there with great backing vocals, and Jeff’s new band really fits what he is going for on this record. If this album does not make journalist’s “top ten” or best of lists at the end of 2016, it is simply because the reviewers have simply not heard it. Let’s hope they do!
Jeff Shepard can be purchased right now at Jeffshepherdmusic.com.
Do yourself a favor and order it now!