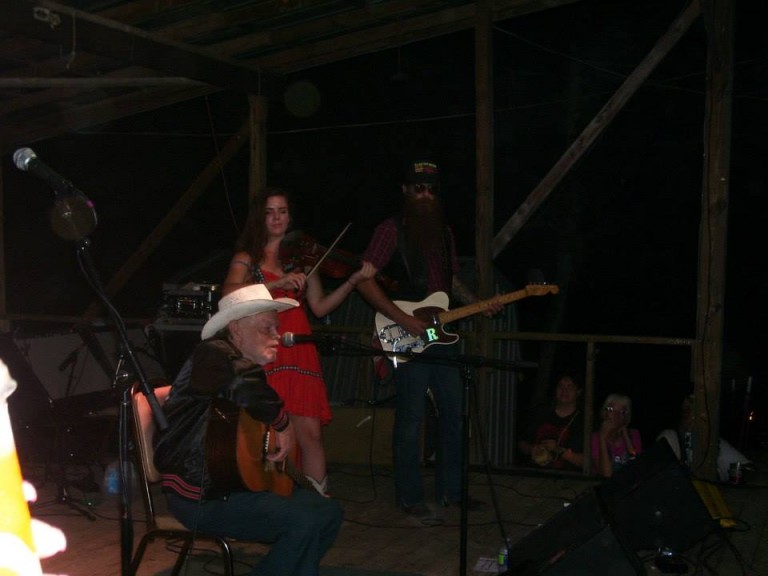 It is with a heavy heart that I write to report tonight that I was texted around 9:30 and I was told Country Legend Red Simpson died tonight in California, he was 81 years old. Please join me right now as I share some stories and some accolades Red Simpson achieved in his lengthy career which spanned many decades. First off in my cover photo YES THAT IS Stump Tail Dolly, at the time they were not formed. They played ONE HELL of a show in 2013 at Muddy Roots Festival, you know what Mr. Owen is welcomed him in Heaven I’m sure. Bob Wayne and the Outlaw Carnies and Jason Galaz and Gene Thome and so many more brought him to us.

I spoke with him on the phone so many times and I asked him once Who discovered you? KNOWING Fuzzy Owens did Haha
but he said well, My Momma and the doctor discovered me coming out…
He was 14 years old when he wrote the song “Endless Black Ribbon” and replaced Buck Owens at clubs when he became of age, when Fuzzy Owens discovered him and in fact he and Owens began writing songs together in the 1960’s. Their biggest charting hit was ‘Gonna Have Love”..I’m thinking it was 1962 or 3. He had a huge role in forming the west coast Bakersfield Sound of one of my favorite era’s of Country Music ever.

Ken Nelson wanted some trucking songs and Merle Haggard was not interested so Simpson was contacted and he agreed. His first album “Roll Truck Roll” debuted in the top 50 and that song was one of his biggest songs. His next hit was “Sam’s Place” and the ever popular “I’m A Truck”.

In 1972 he debuted on the Opry and in 1976 he recorded “Truck Driver’s Heaven” for Capitol Records, if you can find the first pressing of that album it is a “Holy Grail” to collectors and VERY RARE. In 1980 Merle Haggard recorded his song “Lucky Old Colorado” and also in 1979 Charlie Walker recorded “Close All The Honky Tonks”, and that was re-recorded many times.

In 1995 Junior Brown brought him forth to record two hits “Semi Crazy” and “Nitro Express” and Red Simpson also wrote “Highway Patrol” which was a big hit for Junior Brown. Since then he was a regular in his local scene of Bakersfield performing at Trout’s weekly and he and many more were FINALLY recognized at the Country Music Hall Of Fame with a Bakersfield Sound exhibit, and was given a guest appearance there.

In 2013 like I said Mr. Jason brought him to our hallowed field and we set him on a chair on the O’l Wood Stage and yelled out songs to him and he played for well over an hour and a half that night. He stayed and took pictures with every inquiry until the line wound down. In fact he played “Roll Truck Roll” TWICE for us just because we asked.
It has been reported that he has a new album being released Feb 4rth and at this time I’m not sure if it is finished or not, he had been sick lately suffering a heart attack and had a pacemaker put in. He passed away this evening at 81.