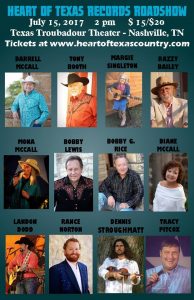 Heart of Texas Records is visiting Nashville today and I am truly excited about this as I don’t get to visit with them as much as I’d like to. The Texas Troubador Theater is hosting today’s event as they feature some of this label’s finest talent. Some of Country Music’s greatest Legends will come alive tonight with timeless classic Country Music hits that are sure to accommodate your appetite for the more Traditional  sound. I need to get my butt out to the Texas area sometime and visit the museum there, as I absolutely LOVE Country Music history.

When I got there I found Mr. Tracy Pitcox and met him finally after many years of communicating through emails and IM on social media. He took me backstage and I got the opportunity to finally meet Mr. Tony Booth, several more of them I already knew through R.O.P.E. and other functions. I wanted to publicly THANK HIM for his hospitality and support to allow me to do this for him.

So first we had Illinois native Mr.Dennis Stroughmatt who plays Creole Cajun music, but tonight he began the show with those wonderful twin fiddle sounds I often associate with Texas Traditional  music. I’m telling you folks the double stop intros were plentiful yesterday afternoon. YES FOLKS I do realize I misspelled his name SORRY.

He posses a truly heartfelt and commanding voice and his songs were full of those wonderful twin fiddle double stops, always identified with Texas Traditional Music. He was a truly fine addition to this lineup tonight, and I know it’s not easy to handle that fiddle and bow while singing.

I also didn’t realize until this morning my knucklehead self forgot to turn my phone sideways for a better video. I shot some truly good videos I just need to learn to tweak what I do to make it better. This new phone I bought has the ability to allow me to maintain the entire website from my telephone.

He performed “Heart Over Mind’ from Mel Tillis, and his second song was a song written in the 1960’s by Hank Cochran called “Don’t You Ever Get Tired Of Hurting Me? It was made vastly commercially popular by Ray Price. this young man truly embellishes Traditional Music with the way he performs.

Next up was powerhouse family member Diane McCall who performed the song “Sugar Cane Moon” made popular by Bob Wills. You know much like the name Williams, Tubb or Morgan, the last name of McCall is just as integral to Country Music as the others.

She also performed another fine classic Country song today, and I also thoroughly enjoy admiring the music that this family graces Country Music with. I haven’t had the chance to see her for many years, since one of the Wayne Mills tributes where I saw her with Mr. Tom Ghent.

Razzy Bailey is an overlooked Country Music Legend by all means. He performed “Baby Come See Me When It Rains”, and he also came out and made jokes and we had a wild time then. Razzy Bailey had much success as a songwriter and publisher back in the 60s and 70s.

He has always been a truly funny performer and much like Johnny Russell he can flip from the jokes to being heartfelt and serious at the drop of a hat. Mr. Razzy Bailey is still one of my personal favorite Legends around, these guys from days of old didn’t need to be filthy to be funny.

Margie Singleton is a true Country Music Legend as well, having been a regular duet partner that often joined George Jones and Faron Young. In the 1950’s she signed to Starday Records and was also a regular guest on the Louisiana Hayride.

In fact just recently Bear Famiy Records released a multi disc set of George Jones EARLY material and she’s on that set and probably in a major fashion. If it’s one series I REALLY LOVE it’s the Bear Family series, I’ll pretty much snatch up ANY set they release even if it makes my wallet cry.

In 1963 she had a huge hit with the song she played for us today called “Old Records”. She also played that song numerous times on the Grand Old Opry in the past. She spent years singing backup vocals for Charley Pride, Tammy Wynette and also recorded the original version of “Harper Valley PTA” that Tom T Hall wrote. Although her version didn’t garnish as much commercial success as Jeanie C Riley, she is still credited as the original recorder of that song.

Bobby G Rice is another overlooked Country Music Legend, who earned Male Vocalist of the year in 1973. He earned much commercial success for the song “You Lay So Easy On My Mind”, which he performed for us today. I have the pleasure of seeing Mr. Bobby quite often at R.O.P.E. and other local hometown Country Music functions.

He’s been entertaining audiences for forty five years this year, and his signature song has been recorded by more different artists than I could even name. He has had thirty Billboard Chart hit singles and has appeared on a long impressive list of television and radio shows.

Rance Norton came out and performed the song “Honky Tonk Healing” which I remember from the David Ball album Thinkin Problem. It was written by David Ball and Tommy Polk for that album.

He also performed the song “Just Start Walking” for us tonight, and it was indeed a pleasure to see him and some of the younger performers today. These guys are the future of the Texas Traditional Country Music movement, and always pointing out that resource is important.

Darrell McCall was a former member of Ray Price Cherokee Cowboys as well as Faron Yuong and Hank Williams Jr. He later went on to write Eleven Roses for Hank Williams Junior and more.

He played “Country Girl” for us that was originally performed by Faron Young and many others. However the best song that he played was the ever popular song “It’s The Water”. I truly enjoyed watching this song being performed.

My favorite portion of the show was watching one of my TOP 50 Of 2016 Landon Dodd. He played a song called “Same Old Town” first. That is an old Skeets song from long ago, and he also played “One Bar At A Time” by Stoney Cooper.

Mona McCall is the wife of Mr. Darrell and we enjoyed her playing the song “Sweet Lips” and “Bandera”. Coming toward the end of the show it was nice to see the main man of the night Mr. Tony Booth who is a true Country Music Legend in his own right.

The remaining two members of the Survivors trio of Tony Booth, Darrell McCall and Curtis Potter came out and sang “Wasted Words” and “i Thought I Heard You Call My Name”. Sadly Country Legend Curtis Potter died recently and the last two members graced us with their fine songs.