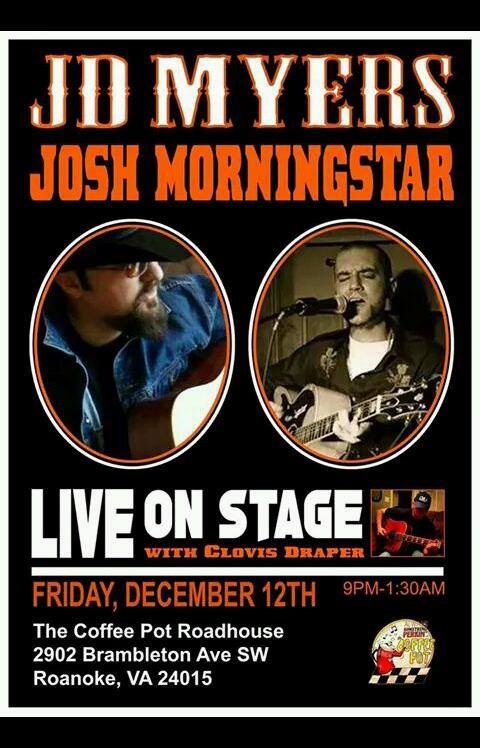 Folks I have featured Joshua Morningstar on this website a lot…because he is a busy individual!
Hell I talked to him briefly on Friday as I missed his show in Nashville with Jesco White
and he was turning around and traveling to Chicago to play Reggies with David Allan Coe.

Now Joshua will be back at Reggies in November and he will be there in 2015 for Moonrunners Music Festival.
He is also on tour in December on through 2015 with Shooter Jennings and Waymore’s Outlaws.

We have a long history together in a short time. We have only known each other
a little over a year and have become quite close from our back history. We have a lot
in common and have a certain “brotherhood” not many others have.
I’m proud to feature his work and know him as a man.

So on Friday December 12th he will be the opening act for J.D.Myers.
This show will take place in Roanoke Virginia at The Coffee Pot Restaurant.
I have placed a link to their menu HERE.
This looks like a really good place to see a show, I’ll have to put it on my “to do” list.

J.D.Myers is someone I haven’t featured on the site yet but he has been on my “radar” for
some time now. He has released several independent albums and one live album.
I am currently listening to his newest album “Legacy” and honestly it’s pretty damn good.
I am enjoying what I hear…I think you will too.
I’m more into an older sound of country music however I get the 70’s and early 80’s
sound-itch sometimes. And his sound is certainly along those lines and it’s good.
He’s also a lefty (like me) so he can’t be all that bad..Ha
I’m going to be searching for his original music and I’ll feature him more later.

He has had a history with Asylum Records and has released some of his out of print albums
through them in the 1990’s.
He has had some songwriting deals with publishing houses in Nashville through his career here.
Independent releases with original music infatuate me and it’s hard to impress me but I
eagerly await anyone to try..and honestly I HOPE they succeed doing so.
It means I found a kick ass album that seldom leaves the player.