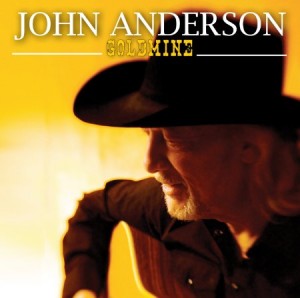 For the first time in over nine years John Anderson has released new music, and is well on his way to being a Country Music Legend. In my opinion he is one and recently on May 26th he released “Goldmine” which is some of his finest work I have heard in many years. It is a thirteen track album of classic John Anderson greatness with his trademark style of delivering his vocals with that “twang”. You know how music these days lacks voices that are distinguishable from one another, well John Anderson you can STILL easily pick out from the rest.

He created his own label called Bayou Boys Music to bring this album to us, and it includes some really well written songs. The second song called “Magic Mama” was penned by none other than Country Legend Merle Haggard and the title track “Goldmine” was co wrote by Josh Turner.

This album has some mighty fine steel playing on it by Mr. Glenn Reiuf and so many more good background musicians I truly enjoyed almost every song on this album. GREAT PURCHASE and it is on my “Top 50 List” of this year for sure, I had heard about this release but wasn’t totally sure when it was coming as the media hardly covered it. Mainstream media doesn’t want you to know artists like John exist or that he is still as active as ever.

The best song on the album in my opinion is a “Mountain Style” song called “Song The Mountain Sings” and it is co wrote by one of my personal favorite songwriters Buddy Cannon. He wrote the song called “Pyramid Of Cans” recorded by Mel Tillis and also cut by George Jones. Buddy Cannon is one of my top 3 favorite writers ever and always will be. Probably the second best and most well written song on the album was called “back home”, it was so well written I had to pull over my truck and listen really close.

John has released 22 albums in his tenure the last being “Bigger Hands” in 2009. He has charted more than 40 singles and 5 number one hits and was inducted into the Songwriter’s Hall Of Fame in 2014.