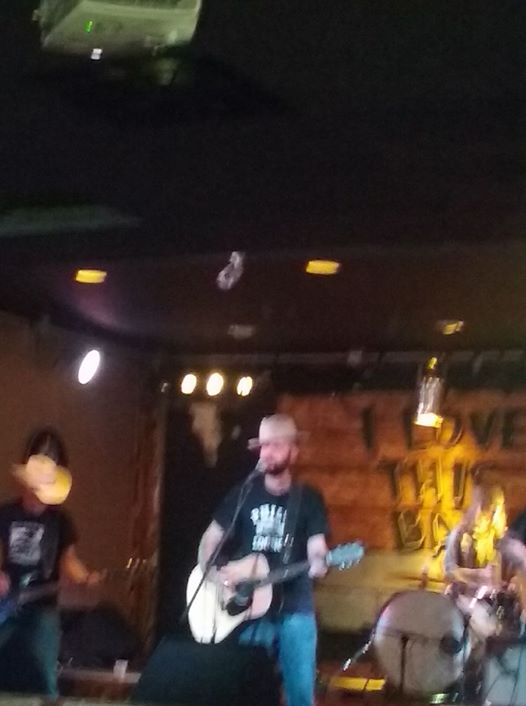 This weekend I’m out here in Bowling Green at one of my favorite places to eat and watch music The Spillway Bar And Grill folks this place is always a challenge to decide what to eat. Mr. Josh is one of the few folks from Altamont that we got to see grow into a huge road warrior for local music, there’s NO TELLING where this man and his band is going to end up. He raises his glasses and yells “Cheers To Health And Happiness” as he plays originals in his set like “the Ballad Of Bobbie Jo” whom he wrote about the lady that runs his home bar in Hagerstown Maryland.

He recently recorded a NEW album I’ll be telling you more about later tonight on this article as I warrior on for his cause. HE WAS my 2015 Artist Of The Year and like I said he is one of the few artists from the time we met has grown and become more honed in on his craft. He writes quality songs that make you actually think and feel as a listener and an individual.

His first song was “Devil Shoot Her Dead” afterwards he went into a terrific version of “Okie From Muskogee” of Merle Haggard fame circa 1969. he went into a bluesy slower version of Hank Williams Sr. “Your Cheating Heart” and right now as we listen he is playing “All That I Been Looking For Is Gone”. He is playing Waylon’s ‘Good Hearted Woman” and followed that by a very special beer drinking song “The Bottle Of Whiskey Won”

“Working Man’s Blues” and “Brand New Angel” were next, as he played Ernest Tubbs “Driving Nails In My Coffin” next, followed by Billy Joe Shaver’s “Ride Me Down Easy”. His set tonight also included “Swinging Doors” and in honor of Willie Nelson’s birthday today he played “Whiskey River”.

He is playing Songs off his upcoming record called “Whole Lotta Crazy” and he played one called “Cocaine”. Now you might remember Billy Don Burns new album “Graveyard In Montgomery” off Rusty Knuckles label, guitarist Bobby Miller truly makes this song sound epic up there tonight as they included that in their set.

“Ramblin Man” is what’s up now followed by “Gone Gone Gone”. “Jambalaya” was next, I’ll tell you what this new band setup here truly features his vocals better. Especially on songs like Belle Of The Ball” and others, Mr. Josh stands stalwart as a frontman now better than he ever has in the past. I have truly enjoyed watching him develop a style and a fashion all his own, and burn up the roads doing it.

“Rolling In My Sweet Baby’s Arms” is up now, as he takes the intermission break. The band is truly becoming better in tune with his style and vocals complete with  Mr. Taylor Hearnly on drums and Mr. Greg Johnson on bass. He began his next set with “Whole Lota Crazy” off his new album. He gave me a good preview in the van in West Virginia and I’ll tell you folks it’s going to be a GREAT new album.

He’s doing a REALLY GOOD version of Crazy Arms wow..followed by “Crying Eyes Of Blue”. He included “Gentle On My Mind” as well as a really cool new song called “Damn These Birds” that he wrote about dope dealers he used to buy from in the past. This video is from the song called “Shotgun Willie”, and also included in this set was “Tonight The Bottle Let Me Down”.

“Cold Cold Comfort” was next after that was “Kaw Liga” and “Old Habits” from Hank Williams Junior. He closed the show with “Will The Circle Be Unbroken” and he replayed “Whole Lotta Crazy” which is his new branding direction lately. He followed that with “Merle Haggard Died Today” and Billy Don Burns “Haggard And Hank”, before he closed the show with his usual ‘I Saw The Light”. He always carries one of the last notes in what is becoming his very own signature twist on a well known Country Music song.[fb_button]