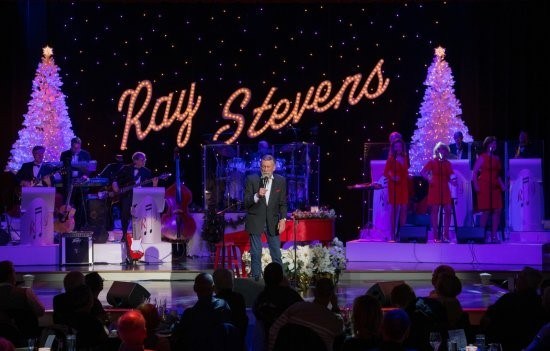 Starting last week Country Music Legend Ray Stevens began his Christmas shows at his newly launched entertainment complex called CabaRay. I recently reported on the opening of this event and you can read that HERE. He will be featuring multiple Christmas themed shows until December 29th.

Much like many other artists we are reporting on right now, he is decked out in Christmas garb and ready to bring in the holidays with Christmas songs and decor. Mr. Ray reportedly announced “It’s beginning to look a lot like Christmas”.

Tickets are on-sale now at raystevenscabaray.com or by calling 615-327-4630. CabaRay is located at 5724 River Road in West Nashville.

Opened to the public in January of this year, CabaRay is an homage to the producers, musicians, songwriters and artists who “made Nashville Music City,” according to Stevens. The venue’s interior is wallpapered with recording studio photos of sessions where hits like “Pretty Woman,” “El Paso,” “Ahab the Arab,” and many others were born. The showroom features six red leather banquette booths named for esteemed Nashville record producers Chet Atkins, Owen Bradley, Shelby Singleton, Fred Foster, Jerry Kennedy and Billy Sherrill.