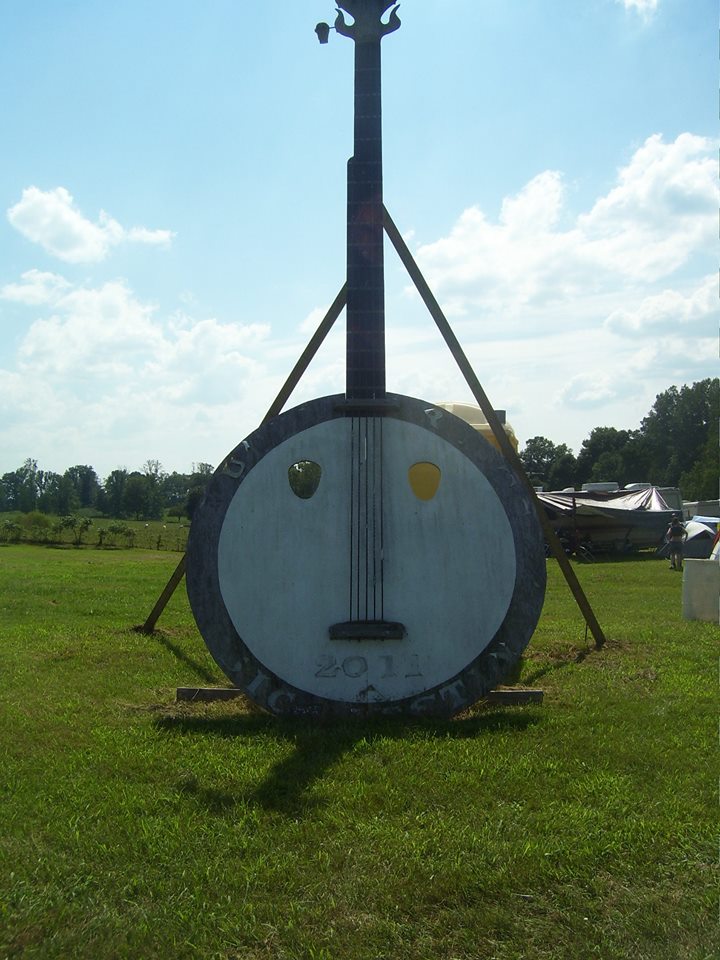 I had a little downtime from stage 1 to stage 2 and I was already dozing off, at this
time I had been up for over 30 hours.
I had literally shook almost 100 hands before the Hill Swillers even got done..
I was in my little chair taking notes and doing chart work and people was coming
up and telling me how they loved these articles..and I was humbled.

So YOU WILL be able to keep reading them! I CANNOT STOP NOW
I’m too far into this to turn back now people.

After catching up with my buddy Mr. Keith from Call Me Bronco
and others I wanted to see and love on I made my way down vendor row
to stage 2 which is all the way down on the end of the gravel road
that is vendor alley.
I knew that I would do my shopping Saturday because I wanted a Hillgrass Bulebilly
T shirt finally. I had a “Support Dirtyfoot” one but not their LOGO shirt.
And I stopped over at Camp Cracker Swamp and hello to Nix and his crew.

Finally I made my way over to stage 2 and picked a good spot to plant my butt
for one of my favorite performers (and people) in the music..period.
He is a straight shooting honest and good guy and truly loves those that
love him.

J.B.Beverley comes to us from North Carolina and right now
of course he is supporting his new album “Stripped To The Root” under the Rusty Knuckles label.
He just got off a 6 and half week tour with Rory Kelly and had him on stage with him that night.

In my opinion the TOP 3 guitar pickers in independent music are James Hunnicutt
Dallas Moore and THIS MAN Rory Kelley.
This man does a heavy, hard rocking version of “Sixteen Tons” made popular by
Tennessee Ernie Ford and it was wrote by Merle Travis in 1946. Now Merle Travis
originally cut the very first version of this and Ernie Ford cut it in 1955.

J.B. is always a VERY energetic and high octane performance every time I have
ever seen him play.
He opened his set with “Cigarettes And Alcohol” and explained to us that it was
not a “Wayward Drifters set”. It originally was advertised as a Wayward Drifters set.

He played “Get The Wheels A Rollin'” and I’m glad I got to see his set cause the last
time I saw him I had to leave early because of an ice storm.
“Some Other Place In Time” was the third song on the set, then he let Rory Kelly
tear up the guitar playing his version of Sixteen Tons.

“Favorite Waste Of Time” was one I don’t think I ever got to hear him play live.
I enjoyed the Drive By Truckers cover he did, and he also played “Time Will Tell”.
He played “Disappear On Down The Line” and he closed the set with “Wayward Drifter”
and I got to talking with some people form Ohio.
I am pretty sure the last song was “Train Song”..I may have that wrong cause they
were an interesting couple that was loving on my articles.

in my opinion at that time J.B. did the BEST SET of the festival. NOW it’s still one
of my TOP 3 favorite sets I saw.
Hillbilly Casino, Bobby Bare and J.B. were the three best sets I caught all weekend.

I stayed in the stage 2 tent to see J.D Wilkes And The Dirt Daubers.
I got me a bite to eat and they got the Dirt Daubers on and they were most certainly
one of the top 10 sets I saw.
Jessica Wilkes on Bass or singing is a really powerful performer and gets the crowd
really riled up.

They start with J.D. singing and they opened with “Let It Fly” which is one
you’ll hear almost every time they play a set.
“Night Ride” and “Wild Moon” are also ones I recognized right away.

Miss Jessica and J.D. Wilkes trade spots on singing and Bass duties
for half of the set.
She got up there and sang “Apples And Oranges” and ‘River Song” and
even did some crowd surfing and they was passing her around.

They played “Sugar Baby” which is actually a Shack Shakers Song..but I did not mind
because eventually (I’ll tell you more later) I missed The Legendary Shack Shakers.
“The Devil Gets His Due” was one of their last songs.

They closed their set with “You Keep A Knocking But You Cant Come In”.

The two sets I missed friday night because I was so tired I was starting to
fear driving back to the hotel room.
I missed The Tillers and Pokey LaFarge, I will have to report on their shows
another time.

Earlier that day I asked Mr. Geoff Firebaugh (bassist for Hillbilly Casino)
if they would play “Big Dan” for me. They did BETTER than that..they made it
a 10 minute song!
Like I said Hillbilly Casino was one of the
TOP 3 sets all weekend.

They absolutely commanded the stage that night, their lead singer Nic Roulette is
a VERY energetic and entertaining lead singer.
He NEVER stops moving around and jokes and interacts with us as an audience
better than any of the sets I saw all weekend.
Hillbilly Casino brings to the table what 95 percent of mainstream bands cannot do
nowadays..

As I was coming up to the stage 1 area I heard “Debt With the Devil”.
I’m honestly not sure if this was their opening song or not.
I was tired..it was a lot to take in at once, and I got a good spot to sit.
“80085” was a good song I always enjoy that one and then they
played “Something’s Getting Ready To Give”.

I was doing some pre-work and I missed a little bit of their set.
However I caught the most of it all.
It’s hard to get pictures of these guys cause none of them stand still..
ever..it’s complete pandemonium everywhere when they are playing.

“PBR” was one they played that is just a rocking tune, and they did a new song.
I didnt catch the name of it.
As I previously said they did a ROCKING version of “Big Dan”. And it involves
the audience and keeps their attention really well.
People like to participate and scream go wild and drink…lots..at festivals.

Casino does those things. They encourage complete no holds barred chaos
at Muddy Roots.

James Hunnicutt came out and played instrumentals with the band
and also did some banjo playing..GREAT STUFF.

They closed their set with “The Hole” “Violets In May”
And my personal favorite is when they bring out the Tennessee state flag
and barrel into “Tennessee Stomp”.
They leave the crowds heads spinning into rockabilly fever!

I was completely exhausted and left for the hotel and as I
previously stated I missed the rest of day 1’s activities.