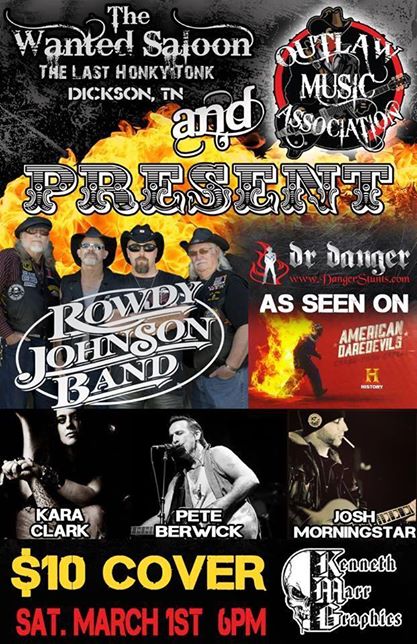 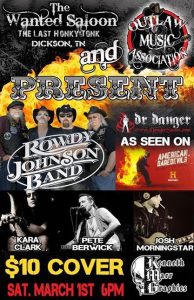 In the middle of my Muddy Roots coverage I have to stop and inform my readers
about a GREAT weekend of music coming up.
This Sunday I want to tell you about a REALLY GOOD lineup at The Wanted Saloon in Dickson Tn.

Last time I was out there for The Rowdy Johnson Band I had a really good time watching them play.
I especially enjoyed his steel guitarist Dan Showalter, and we had a really enjoyable
conversation about old time pickers.

Country Music Songwriting Legend Chris Gantry contributed a lot to country music
like Glen Campbel’s “Dreams Of The Everyday Housewife”. My favorite version is on
his 1969 LIVE double album.
It’s one of my favorite LIVE albums I own to be honest.

Kara Clark is a really good songwriter and singer from West Virginia.
Honestly I launched the website during her set last year in October
during the Outlaws And Icons event in Altamont.

Since then I have reported on her numerous times in the past
from several states. She sings a song called ‘Relapse” and it’s one
of my all time favorite songs from independent music altogether.

Guy Nix and James Austin are two old friends of mine from the past.
Both of them I really enjoy watching play their songs are really great.
Along with R.C. Oleary who I also have known
for some time and enjoyed his music and being around him.

The Wanted Saloon is a very nice Honky Tonk out in Dickson Tn off Hwy 70
and I thought the venue was really nice the last time I was there.

Go out and support some really great live music Sunday Spetember 7th
for 5 BUCKS!
You cannot beat the entertainment for that price!