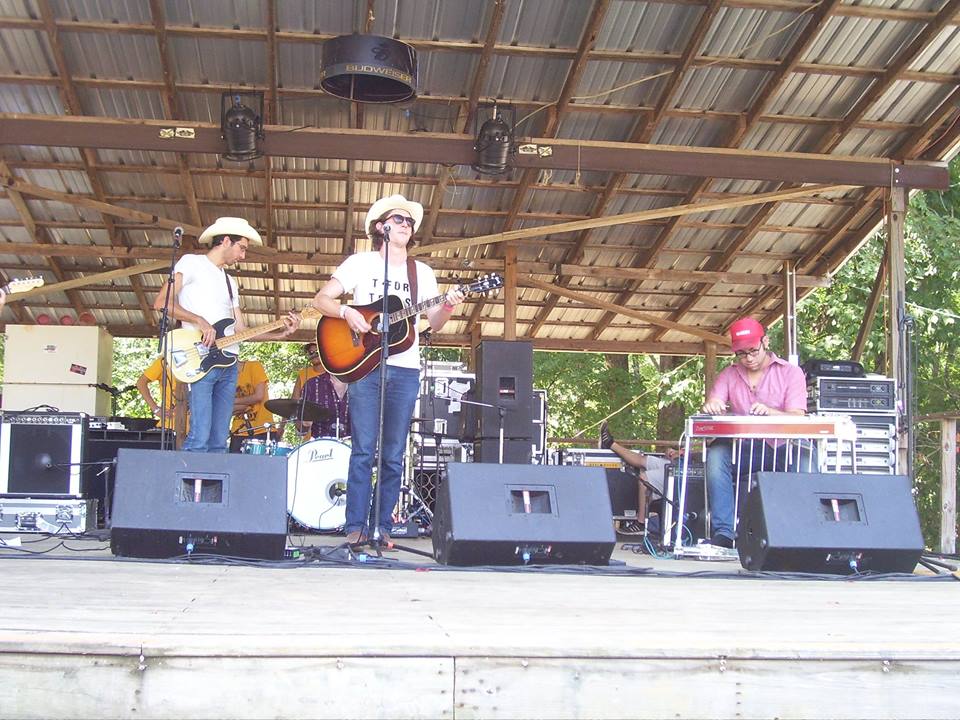 Folks, much like my number one set last night this portion of my series will also feature several acts I have never featured on here before. I got to the Junebug Ranch early on Saturday in order to catch this fellow who is on the texas scene a lot and his name is Cale Tyson. He has several small EP albums out and is currently financing his debut major album. I have been keeping him on my radar for many months now and I keep having to miss his shows, so festivals are the best bet.

He opened his set with “Gonna Love A Woman” and right away he displayed his nostalgic throwback sound that I so long for in music. As he played his next song called “Gabriella” he showed us his two step songs laced with that old steel guitar solos. What an awesome band he had up there that day, this was truly an awesome set.

Next was a song called “Careless Soul” and “Long Gone Girl”. But perhaps the pinnacle of his set today was the song called “Somebody Save Me”. THAT SONG just blew me away..it was truly well written and composed really good. One of the best songs of the weekend.

“Two Timing Blues” was next and also he played “Long Time Gone”. I have been told that most of these songs are going to be on his debut album and right now I’m not sure what label will release the record. “Can’t Feel Love” and he closed his set with a song called “Easy”. I left that set VERY impressed and I will certainly be covering his shows again soon.

Lou Shields is another I have never covered on here and he’s a super great guy. VERY talented with music and artwork, having designed the first cover of the Urban pioneers album and much more. What I began to do this weekend is catch portions of the majority of the sets all at once, running back and forth from stage to stage writing down stuff. Mr. Lou is a one man band based out of Chicago and you can truly see his appreciation and influence in different styles of blues.

He opened his set with “61 Highway” and another called “Back Country”. As I previously stated I didn’t get to catch entire sets and I didn’t get to hear him play favorite song he does “Coffee Song” but I did get to hear him play “Cabin In The Woods” and another called “Travelin All Around”. I plan to get to one of his local shows sometime in the future and I shall indeed feature him more, the last song I heard him play was “Hard Road Rag”.

Another new feature for me on here was this next band The Howlin Brothers now as I have delved into their music..they aren’t really brothers BUT they ARE a well oiled machine. These three guys make a good amount of music for only three guys. “Hard Times” was the first song I got to hear from their set as I scurried up to the wood stage for the next two acts this afternoon.

Some other songs were next and as I watched their set I was sold on their music I HAD to go get their albums. I still have to get them on vinyl as well, I strongly suggest you go get their music. “I Was Wrong” was another song I noticed from the set, now this is another band I’ll be catching their local show as well and I will be bringing you as much news as possible from these new features.

“Going Down South” was next as their set pretty much steamrolled and didn’t really stop and talk much or play any games. These guys were here to whup our asses with string band fury and as they unveiled the song called “Yuma Train” this band is one that I am truly regretful I haven’t featured earlier but I simply cannot cover everyone at once no matter how I try to remedy that. They closed their set with “Tennessee Blues”, and I did get to briefly visit with them at their merch booth before returning to the wood stage for a gal that is NO stranger to this website.

Sarah Gayle Meech has been busting up Lower Broadway for years now and in my opinion she is one of the top 3 COUNTRY acts in the downtown area. She plays the Palace a lot and her new album (her second release) called Tennessee Love Song was a stellar addition to her arsenal. All I need to say is it was once again produced by Andy Gibson formerly with Hank 3.

She had the whole place dancing EVEN ME as she opened her set with “All I Want’s A Honky Tonk” and “Old White Boots” both off her first album which is in my current rotation. This woman just KILLS any show she does and I’d pay big money to see her play ANYTIME. When she has Tommy Hannum on steel guitar it just adds to the greatness of her show.

She began to delve into her new material with songs like “Love Of Mine” which I got to hear at the Nashville Palace early this year before the album came out and she followed it by “Watermelon And Root Beer”. She brought along a GREAT band with her and I got to buy her new album on vinyl and ran that to my truck after the show.

She carried on with “Stormy Weather” and “Get It Over” when she played the title song from her new album “Tennessee Love Song” afterward. “sad And Lonely” was next and she followed that by my personal favorite song she does called “Foolish”. I LOVE that song because it’s simply written well and easy to understand, I think if Hank Williams Sr was alive he would LOVE that song too. She sings so pretty you just can’t not enjoy her set.

“One Good Thing” and “Say Goodbye To You” were her closing songs for her set so I loaded up my chair and my notebooks and wandered over to the Cracker Swamp Productions Stage for a man I have indeed covered frequently and I intend to keep doing so. This was a monumental period of Joshua Morningstar’s career as this was his VERY FIRST Muddy Roots.

“Brand New Angel” was a song he released early last year followed by his favorite song by Lefty Frizzell called “I Never Go Around Mirrors” which was wrote by Sanger “Whitey” Shafer. He got the whole crowd riled up when he went into his rendition of Billie Gant’s anti Pop Country anthem called “Stop Fn Up Country Music”. Everybody always loves that song no matter WHO plays it.

Two of his best songs he plays were next “March To The Gallows” and his best song that is VERY cleverly wrote was “As Long As You Ain’t Coming Back”. I was REALLY GLAD he included that song into his new album out now on Little Class Records called “Songs For Fools With Broken Hearts”. He followed that with another song on that album called “Motel Madness”, which made this one of his best sets ever.

“Drivin Nails In My Coffin” was an old Ernest Tubb song that I share an equal love for. You know me and Mr. Joshua share a mutual love and respect for the Legends of Country Music, we crave the facts and history of this great genre. “Dope Sick Blues” is one of his signature songs as he shares his sordid past and how he has overcome his demons and rose a champion.

He closed his set with a tribute to our hero Hank Williams with a song wrote by Songwriting Legend Billy Don Burns called “Hank Williams Lonesome And Keith Whitley Blue” followed by a GREAT version of “I Saw The Light”. WOW This day was only half over before I witnessed the second best set of the entire festival from another Legend that absolutely TORE the wood stage apart and at the same time also became my third favorite set. I shall include them in my next installment!