Muddy Roots Day 2: Part 2: And Like A Good Neighbor Snake Farm Is There! 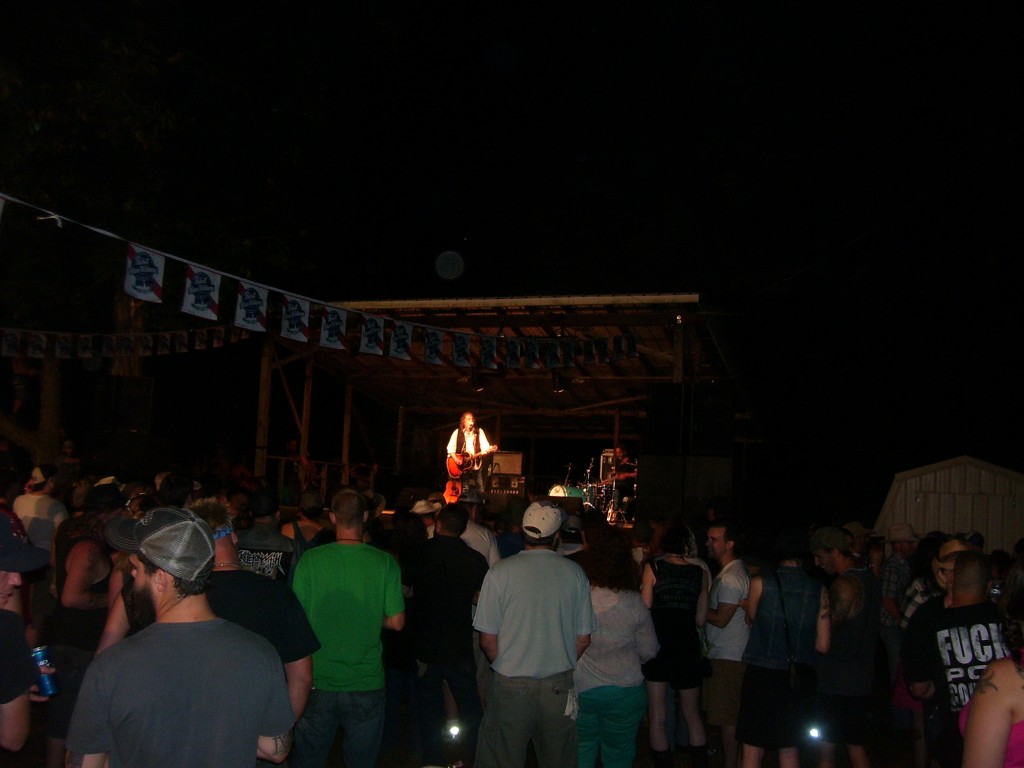 Hey folks I’ll be honest I have covered Ray Wylie Hubbard before but he REALLY slayed Muddy Roots tonight. HE WINS my number two spot. AFTER his set was another Country Music Legend I covered last year Bobby Bare, and he won my third place for the whole festival! So before day three even happened my personal favorite sets were already sunk into my mind. Now DON’T THINK for ONE moment I have no love for the three Bluegrass giants to come…no no no. But honestly I myself personally enjoyed the 70’s honky tonk era of Country Music the best and like I said it’s JUST my opinion and it’s not meant to take greatness away from Dr. Ralph Stanly or the others. But FIRST a few MORE acts I got to see before the two best sets I saw this weekend.

Now this portion of day 2 includes a gal I have been wanting to cover for some time now Margo Price. She is an upcoming Country Music POWERHOUSE, having been the former front woman for the band Buffalo Clover before venturing out on her own. Now she has lined up a STELLAR band that she has billed “The Price Tags” and has slammed Nashville with some traditional Country Music that is more country than anything I have heard in months.

Jack White has announced that in spring of 2016 Third Man Records will release her debut album “Midwest Farmer’s Daughter”. And from what I have heard at Muddy Roots THIS album has most likely already earned a top spot on my albums of the year before it even launches A FIRST for my website!

She opened her set with “This Town Gets Around” and almost right away I witnessed some of the greatest songwriting and lyric placement this whole festival..heck I was so captivated by her first song and taking so many notes I missed what her second song was. She continued her set with “Weekender” and then her BEST song yet called “Since You Put Me Down”, which was her most well written song yet, combined with whiskey drenched vocals the likes of which this generation lacks in it’s “country music” today.

The last two songs of her set I recalled were “Don’t Say It” and “Heartaches And Hangovers”. I’m telling you she is REALLY up and coming in REAL Country Music and I’m sure she will be featured at this festival again and many other places….like this website.

Now folks I had to meander down to my friends campsite to catch some supper as I was getting very hungry and I listened to the great Chuck Mead play his set on stage 1. As I sat and ate I got to hear him play some really cool hits from his tenure with BR5-49 like “Little Ramona” which was my favorite from their first album.

He touched on many others that were recorded only on live albums like the underground classic “Live From Robert’s” like the song “Me And Opie Down By The Duck Pond”, and the song called “Waiting For The Axe To Fall” was included in one of their live albums. Lately they have been releasing more live albums from their glory days of the original lineup, and have had a few rare resurfaces.

The last song I recalled from his set was “Eighteen Wheels And A Crowbar” from their second album and also this was a staple song during their Robert’s sets. They were known for their multi hour sets on lower broad for tips and donations. When I recall Split Lip Rayfield coming from Bloodshot Records I recall these guys coming from Lower Broad.

Now as I made my way back up to another stage to feature more music for this coverage I passed the tent stage to listen to Joseph Huber’s set. I have featured him many times on here and I often described his music as my “Feel Good Music”. I just love his voice and the way he sings his songs and delivers his lyrics.

I got to catch “Same River For The Second Time” as his show was PACKED, this man drew quite a big crowd in that tent and I always agree with why. I myself really love his music solo even though I enjoy his former band as well. And as I got to listen to “Drop In The Bucket” I sat there and enjoyed his presence.

I did get to greet him and buy some stuff from him and the last song I heard from him was “Hanging Road” the title track from his new album on Muddy Roots Records.

I made it to the main Ol’ Wood Stage to see a true Country Music Legend “Ramblin” Jack Elliott. Now I have seen many many Legends in my time but none as revered as him by Country music and Folk Music historians alike..and many others as well. He was actually born Elliot Charles Adnopoz in the 1930’s from New York, and has influenced many genres of music.

I missed the first portion of his set for others but when I arrived and set up my chair and books he was playing “Don’t Think Twice” while simply seated on a folding chair and holding his acoustic guitar. Simple and basic was the best description of his set this night and he told stories of his life on the road with fellow Legends in a very slow and basic form. I mean there were so many instances and scenarios he touched on and one could tell, he was there. In my opinion he was just as fantastic as Billy Don Burns and many other Legends that lived this life.

“Salt Pork West Virginia” was next and followed by “If I Were A Carpenter” and “Cuckoo”. Like I said none of these songs have I ever heard live and in person in my life, for me this was indeed a rare life happening for me. To see this many Legends performing on the same weekend bill was just absolutely GEEK CENTRAL for many people like me interested in Country Music.

“Waiting For A Train” was next and he closed his set with “Talking Sailor” and he was later brought out to join the next Legend that played after him and that man was none other than Bluegrass Legend Peter Rowan.

Peter Rowan’s contributions to music in general date back to the 1960’s where he played with Bill Monroe’s Bluegrass Boys and for a year he played for Bill Monroe before forming bands like Old And In The Way which included Vassar Clements. He contributed many songs that were recorded by New Riders Of The Purple Sage” which I will mention next.

He opened his set with “Moonshiner” and “Walls Of Time”..and went right into one of his songs the Purple Sage recorded called “Panama Red”. It is one of his most well known songs of his tenure in many genres of music and that was followed by “Midnight Moonlight”.

Many of Peter Rowan’s songs have been performed by people like Emmy Lou Harris and Gillian Welch on some of the most prestigious stages and venues across every genre of music and he is also highly loved and admired by people like me. I was just absolutely in awe of his presence there, and he was in awe of the festival and of our admiration for him in return. His comment to my knowledge of his music was “Remarkable for a young man like this”….

He went on to play a few more before he got to my favorite song he does “Dust Bowl Children” and like I mentioned before he played “Walls Of Time”. Both songs have certainly stood the true test of time and are remarkable timeless classics loved by many. He began to close his set with “Land Of The Navajo” and he brought out Ramblin Jack Elliott to play “Mule Skinner’s Blues” with him. That in itself was something you will ONLY SEE at Muddy Roots, timeless memories I have written in my brain and now I’m sharing them with those who will take the time to read them.

The second place of BEST SET goes to none other than Ray Wylie Hubbard with one of the most blatantly loud and rowdy sets I have ever seen him play before. He just got up there and tore the field apart with his unique sound and tone and slammed right into “Rabbit” for an opener.

Now then folks I would have bet money on him playing the song “Snake Farm” last..but NO he played it next and got the WHOLE crowd going completely bonkers! His dirty blues soaked anthem of his whole set got the crowd yelling SNAKE FARM….yeah it sounds kinda dirty…SNAKE FARM…yeah it pretty much is….

As he played “Drunken Poet’s Dream” the crowd was still riled up from two songs ago before he fired off the other barrel of his weapon. He then played “Down Home Country Blues” and “Train Yard Blues” and a few more before going rocket fast into “Mother Blues” and then proceeded to play his version of “Up Against The Wall Redneck Mother” which was played twice by two different acts that followed each other. The other being my third place winner Bobby Bare who was next.

But first he went into random ramblings and stories about road life while the beat and guitar was still red hot slinging out fast paced music as he went into “Choctaw Bingo” that being my other favorite song he does. He left the crowd wanting more and came out for an encore “Conversation With The Devil” before leaving the place in shambles…The show never stopped and it was like a fast paced train ride through hell itself, he stands there and waves his arms while raising cain about life’s struggles and then just burns up the song!

Finally for me this day was ended with my third place winner Bobby Bare who in my opinion was one of the first true Outlaw Country Singers that went against the grain and developed his own style. He performed a longer set this year with more variety than last year and some rare songs you don’t usually hear him play during live sets.

He opened his set with “Ride Me Down Easy” a popular Billy Joe Shaver song, and went right into “Tequila Sheila”. Most of Bobby Bare’s commercially successful hits are from the 70’s Honky Tonk era. He then went into more classic hits from his catalog like “Winner” and “Streets of Baltimore”.

A bunch of Bobby’s hit songs were wrote by the Legend himself Shel Silverstein, in fact he often recorded whole albums wrote by Shel. Many Country Music Legends had writers that provided much of their signature material like Bob McDill did for Don Williams and Bill Anderson did for Connie Smith. He recorded an entire album of Shel’s songs with Mel Tillis, Waylon and Jerry Reed called “Old Dogs” and he played “Still Gonna Die” from that one.

He continued with Classic that everyone knows like “Miller’s Cave” and “Drop Kick Me Jesus” before going into some more rare ones you don’t hear live much like “500 Miles” and “Four Strong Winds”. Another one he played both times he played Muddy Roots was “Quaaludes” and “How I Got To Memphis”.

He had the whole crowd chanting “I Wanna Go Home” and singing along with “Margie’s At The Lincoln Park Inn” before going into “Mermaid” and closing his GREAT SET with “Marie Leveau”. And THAT pretty much wrapped up my Saturday and I packed up and headed back to the hotel for a beer and a swim in the pool.

I got two more coming soon folks with POWERHOUSE Bluegrass Legends GALORE! THIS WAS my personal favorite lineup of all the 6 festivals.