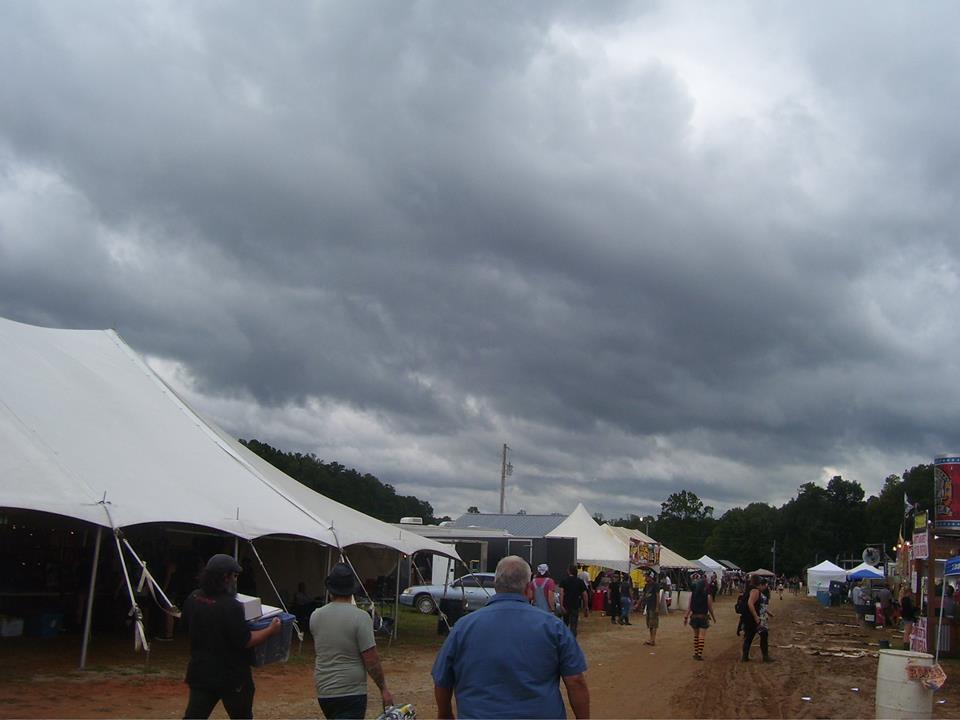 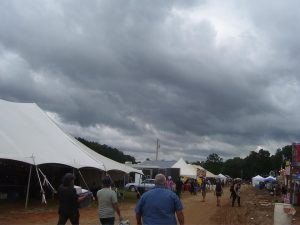 After All the shows I got to see in stage 2 it was becoming more and more
difficult to keep my notebooks dry and my body from not getting the
“Arthritis Twitches”. All three stages were having power problems and
it was being handled REALLY well in my opinion.
Folks…let’s be realistic here you JUST CANNOT argue with Mother Nature
although she owes her 125 bucks!
Things happen and if you cannot accept that just stay home..do not let it ruin
your good time.

One thing I forgot to point out in part 2 was during the Ga Brown set
we also had Brian (We call him Husky) Burnette on guitar joining them.
This segment will have part of his set on it.

I backed up my chair and my belongings back to a more dry grassier area of stage 2
for this next fellow who is a solo act and was previously a member of Jayke Orvis
Broken Band. I know all this information and names and bands are a little much
for a new fan to take in…take a few moments to study and learn them.
There is SO MUCH TALENT to be discovered and loved on folks!

There are SO MANY guitarists in Roots music that just blow me away in
skill and talent and James Hunnicutt is no slouch.
He is a downright positive and nice friend and I first met him years back
at Porter Wagoners funeral. Sad way to get to meet somebody but after our
time together I think Mr. Porter was pleased so many came together to honor
what he gave us and gave to Country Music.

I myself have never witnessed or read James Hunnicutt say a bad thing about
anyone..ever.
You can tell a lot about a musician by what people say about them behind their back
and you’ll hear good things about him..from me or anyone else for that matter.

He cut his set short to help make up for the schedule time wise that was
rapidly flying by as the rain kept coming on and off.
The problem we had was this: when it rained…IT RAINED HARD.
Cars were being swallowed up and tents, the rivers were becoming DEEP
on both sides of vendor alley. I really paid little attention at first
because of the music and my trying to work.

Hunnicutt opened his set with “99 lives” a staple song in his set if you will.
Very nice song that showcases his vocal versatility. He does Faron Young songs
real well because he can throw his voice around like Faron could.
In fact “Live Fast Love Hard Die Young” was his next song.
Faron Young recorded it around 1955 because Ken Nelson practically made him do it,
Faron hated the song. However it as his first number one hit and it grew on Faron.

“Risk The Fall” was another great song and then he did a new one called
“Raise The Flag” He did this song last night a Live True Vintage too and I
got to hear it better last night. It’s a very nice song.

I was talking with some folks from florida and missed one song and he closed his
set with “My Pain” which is my personal favorite song he does.

I went over to stage 3 for some other bands I wanted to see. The first one was
Austin Stirling also know as Hangdog Hearts.
I’m just not so familiar with him, he is from the Indianapolis area and just recently
added fiddle and drums to his previous one man band act.

Like I said I am not so familiar with his work and the only two songs I recognized
were “Flesh N Blood” and “To The Depths”.
And he handed out sampler CD’s and I got one. I SHALL feature this man’s work
further and more in depth in the future.

All this time mind you there were OTHER shows going on and well here’s the deal folks..
I cannot cover them all. I don’t know about them all..some of them I am disappointed I
missed badly.
I have a “bucket list” of shows to attend in the future. This man is no exception…

The next act filled this tent up to the aisle outside…fast. One would think a sports
star was signing autographs. people come to see this man play and he is one of Muddy Roots
more popular acts.
Husky Burnette is a dirty blues player from
the Chattanooga area.
He is labelmates with J.B.Beverley and Rory Kelly and Buck Thrailkill and more under the
Rusty Knuckles label. I call it one of the
“Big Three” labels of the roots music movement.
There are other good ones but Rusty Knuckles, Farmageddon, and Hillgrass Bluebilly are three
most popular ones.

This man shot into an instrumental that drew people into that tent and there was people falling
on me in my chair there I had to move outside..and it was still raining.
I was trying to organize my notes and he was playing “Late For Work” and the crowd was going nuts.

At that point I was really starting to wear down, and one of the volunteers was talking with me.
She said the Goddamn Gallows were rescheduled for Sunday and they weren’t promising that
the Legendary Shack Shakers would play earlier than 2.
Upon that I had to make a hard decision..try to stay that long or go at 11 and rest.
I choose to leave and rest. I got 11 hours of sleep and I’m GLAD I did cause day 3
was MUDDY!

So Husky Burnette and Hangdog Hearts will be on my “To Feature” list in the near future.
I apologize I missed the sets I just had so many factors working against me that night.
And dealing with a broken and wet camera was equally disturbing for me as well.
This was weighing heavily on my mind.