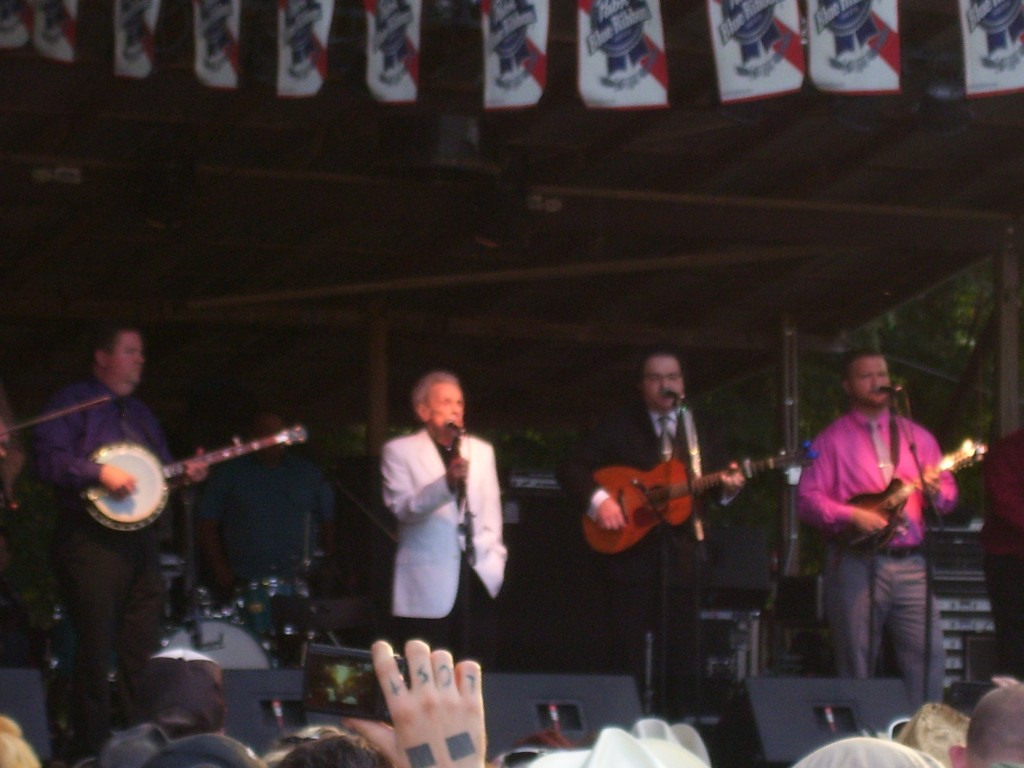 The remainder of the whole festival was spent by me on the wood stage, and I remained in my chair and never moved the rest of the night. I was pretty wore out but man I had a wonderful time, the heat was really wearing on me. It was INCREDIBLY HOT them three days with some times of relief and it was cooling off nicely on Sunday night for the powerhouse Bluegrass Legends to follow, heck I should hope I wouldn’t even need to place links on their names…

None other than Dr. Ralph Stanley and his Clinch Mountain Boys were first up for the main acts, as of course they opened with “Man Of Constant Sorrow” which is a song that dates back to 1913, or older. It was originally called “The Farewell Song” possibly wrote by a partially blind fiddle player named Dick Burnett. I have spent many months researching to find out WHO TRULY wrote this song and have not gotten a final answer, even my CMA resources confirm it is indeed public domain. However the Stanley Brothers recorded the song in 1950 and the public grew interest in the song when Dan Tyminski and Union Station recorded it under the guise of the “Soggy Bottom Boys” in the movie “O Brother Where Art Thou”. This film was loosely based on “The Odyssey” By Homer.

He followed that by “Little Maggie” and I’ll tell you what for being such an elderly man he was in really good shape for the festival, although I did hear he recently fell and injured his hip. He was ushered onto the stage to perform but he has the form and poise of exactly what he is…A LEGEND that is deeply forged into our hearts.

“Worried Man’s Blues” was next EVERY SONG in his set was an absolute timeless classic before he introduced us all to his grandson Nathan Stanley who sang us a truly heartfelt song called “Papaw I Love You” off his “Legacy” album. I bought it it’s truly good you MUST BUY IT!

Next came an instrumental song that lies within the Smithsonian Institute in Washington D.C and it is called the “Clinch Mountain Back Step”. They followed that with such classics as “Pretty Polly” and “Rank Stranger” and the rowdy fast paced song “Lost All My Money But A 2 Dollar Bill”.

The Clinch Mountain Boys played some songs called “Lee Highway Blues” and “Old Country Church” before the defining pinnacle of a Ralph Stanley set and when he delivers this recitation…you can hear your blood flowing. I never ever heard the Muddy Roots field this quiet before in the 6 years I have been coming there….EVER. He stood up there steadfast and recited “O Death”…TWICE. He performed it for us twice in a row and the crowd couldn’t get enough of it, in fact this was perhaps the largest group of people I ever saw at the wood stage tonight.

His encore (of course) was “Will You Miss Me When I’m Gone”. Folks I’m glad I was sitting down cause I had rubber legs and goosebumps on my back. There was NOT a dry eye in the house.

Bluegrass Legend Ricky Skaggs has contributed more to Country Music and Bluegrass than anybody I can think of at his age or placement in his career. He attempted to break into Country Music for a short time but returned to his Bluegrass roots and acquiring more success there. After all, Ricky Skaggs began playing Bluegrass at an early age of 7 when he was seen playing with Flatt And Scruggs. He is also more known for forming an early Bluegrass partnership with Keith Whitley who died in 1989 at an early age.

His first song of his set was called “Ridi’n On That Midnight Train” and was featured on Kentucky Thunder’s first album Bluegrass Rules. Even though they didn’t play my favorite song off their album Ancient Tones called “How Mountain Girls Can Love”, this was STILL a totally awesome set altogether.

“Selfish Heart” was next and he and his top notch band went on into “Pig In A Pen” which is always a good toe tapping fast paced barrel ride. I song I have never heard live was called “Toy Heart” and that song is off his “Fathers Of Bluegrass” album and he also played “Mother’s Only Sleeping” which was good.

The next song was AWESOME choice off his “History Of The Future” album called “Sawing On The Strings”, that’s always a really good banjo picking song he does. The last time I saw them on the Opry they played that song. He began playing some newer songs off his newer albums from 2012 and so forth like “Blue Night” and “Tennessee Stud”.

“Can’t Shake Jesus” was next VERY good inspirational song he does, along with “The Kentucky Waltz”. Before I headed back to the merch area to get a picture with him I heard him playing “Black Eyed Suzie” from his first album. I had to head back and buy some albums and such. Thankfully I parked close enough to the main aisle so I could keep going back to the truck and dropping off every load of merch I was buying…WOW.

The last final act I attended at Muddy Roots was the Legend himself Del McCoury and the Del McCoury Band. He really is a good entertainer as he jokes and talks to the audience between the songs, and I was going up to the main stage after spending some time in the tent with Ricky Skaggs. I missed the first song he began with but the second song was ‘Bluest Man In Town”.

After going into an instrumental song he went into “Hand On My Heart” and followed that by “Nashville Cats”. Then the fiddle player went into a really great instrumental and the band came back to play “You Win Again” by Hank Williams.

One of my favorite songs of the set was “Blackjack County Chains”, man what a great song. Well written and well played. “Lights On The Hill” was next and “Train Wreck”. There was still a pretty good sized crowd out there for this set, and I tell you what “Race Horse” was a truly good choice to place in this set. “Snake In The House” was one the crowd hollared out for them to play.

My second best song they play was next “Vincent Black Lightning” and “Smoking Gun” had this crowd going crazy and was probably the best part of the set as I heard him finish up with “High On The Mountain”. That pretty much summed up my last night at the festival, the heat had worn me out for the four days I spent out there but I tell you what..out of ALL the festivals I go to and cover Muddy Roots main festival is my PERSONAL FAVORITE ONE of them all. And honestly I don’t see much changing that!

I want to thank Mr. Jason and Mr. Chris for always going out of their way to accommodate me and everyone else. On behalf of my website and myself as a fan, I’d like to thank them for the music..and making it feel like home.