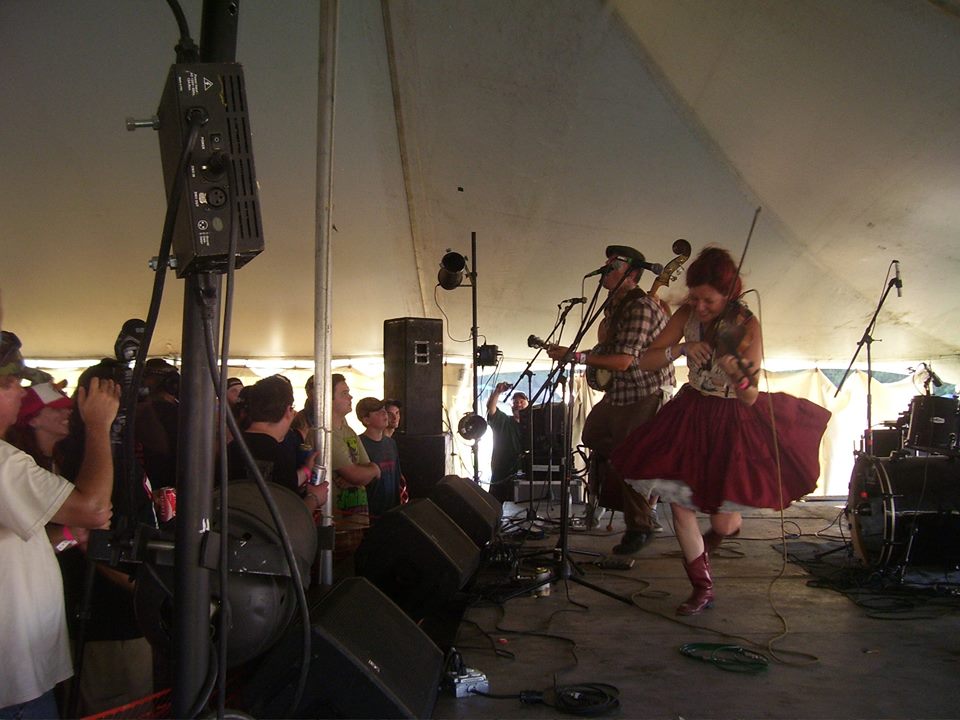 Friday morning when I woke up in my hotel room it finally sank in..I was headed to Muddy Roots in full swing. The vendor booths will abound with goodies to make my wallet sigh as I gleefully support this music the festival features. Oh yes people we MUST open our hearts AND our wallets to help this festival and the music thrive, now I’m NOT telling you to skip your electric bill and live in a milk crate if all you can buy are stickers that’s FINE! EVERY little bit of support helps, if all you can do is offer a free couch to these bands do that. It all fits together and everyone is integral and needed in their own way, there is nobody involved that is useless or not needed. Last year James Hunnicutt said it best “Everyone is equal, there are no rock stars here”.

Home..that’s what this festival feels like to me. This IS my favorite one of all and it would take a pretty darn epic festival to beat it in my opinion. The people that run it are VERY good to me and they care about their patrons.
Mr. Jason and his staff go above and beyond our safety and enjoyment, do what you want but be good to others and respectful of the property and the music. I’ll be honest I had three good sized pulls of moonshine but I went the entire weekend without drinking at all, I have a job to do. So pull up a couch and crack open a beer and ENJOY my articles friends, because Mr. Jason and Mr. Chris and the bands deserve this!

So my first set to cover was Matt Woods and this was his second year at the festival. In fact, last year his set was one of my top 3 best of the whole festival. I had many good things to say about him and to be honest I got a few more.

So he is recording a new record to be out this winter and he played a new song off this forthcoming album, and also he is currently on tour with a full band. I’ll be reporting later about on that in a separate article for him and his tour. It’s just too much information right now to process that plus all the acts I witnessed. Mr. Matt is a Knoxville artist and he frequently comes around my area in fact he is a really hard working road dog.

He opened his set with “Ain’t No Living” from his second album called “With Love From Brushy Mountain”. Both of his albums are really good and both are self produced. His next song was from his first album “Manifesto” and it was called “Days Of Walking”. One of my favorites was next and it’s called “Tiny Anchors” it’s a well written song with many good descriptive aspects.

“Port St. Lucie” is one that usually is always included in the sets I have witnessed of his. This is the third time I have got to see him play and every time I never left sad or disappointed. He then played a brand new song called “American Way” which was very cleverly written, I’m telling you folks this new album is going to be REALLY GOOD and he can just take my money now. I’ll support this man until I’m dead and I hope I can help him continue on to play for younger generations to enjoy.

My all time favorite song was next “Snack Bar Mary And The Ten Pin Priest”, this song is his best story song he does. In fact it is one of my favorite songs period. There are several lines included in this song that are terrific and placed well. “Real Hard Times” was next followed by a song called “Lucero Song”. That particular song came with a really good story of him and his friends trying to pick up some girls and ending up alone. He went into songs like “Bedsheets” and “West Texas Wind” which was off his second album as well.

“Lying On The Floor” and his title song from his album “With Love From Brushy Mountain” were followed by another of my favorite songs “Dead Man’s Blues” where he actually gave up the mic ability to come forth closer to us on the stage and sing it for us with no amplification. It was truly a personal way to hear a song and he had everyone crowd up close and sing with him it was a great way to close a set and I truly encourage you to check him out and buy his albums. And tell him I sent you!

Mikey Classic And His Lonesome Spur was next. Mr. Mikey is the frontman for the Goddamn Gallows and this is his solo work much like their bassist Fishgutzz has his own side band as well when they aren’t on tour. I’ll be reporting on them later because right now they are touring 25 states in four months and they are heading to the Exit In in October.

I got to catch him playing “Pass Me The Bottle” and “Ya’ll MFers Need Jesus” which are actually Gallows songs and I did get to see him close his set with “Oil Fields Are Burning”. I was sort of in the middle of writing and listening to him play as well. I was getting ready to head over to the big tent stage to cover this next duo I have never covered before, every time they come to town I miss them…

Folks I bring you the Barnyard Stompers a HARD WORKING road band consisting of two members whom are two of the nicest people you’ll ever meet out there. And I strongly urge you to go support what they do. Miss Megan plays drums AND guitar BOTH she’s all over the place, they’re loud and they’re wild and they were just what I expected them to be! I have never brought them to Gary Hayes Country so folks here they are!

They opened their set with “Road To Knoxville” and if they played one song before it I didn’t catch it because I was talking with Mr. Mikey about some upcoming Gallows stuff and I ran into Mr. Jared from the Urban Pioneers on the road there and I stopped to talk with him about their new album, more on that in just a bit. They followed with a song called ‘The Auctioneer Song” and one called “The Devils Horn”. Now The “Auctioneer Song” is a pretty well known song by Leroy Van Dyke but you don’t hear any local bands playing it, I was indeed impressed!

“Trying To Cook” was a thumping bad ass song about making drugs and being bothered. Even though I’m a recovery I still enjoyed the song it was fast and loud and Outlaw as all get out! “Outlaw Country Blues” was next followed by ones I did recognize as theirs called “The Saw Is Family” and “Measure Of A Man”. They both have a really good stage presence and they aren’t up there to impress nobody they just play their asses off for you. I highly suggest going to one of their shows in your area, you’ll be glad you did. They played “Country Boy Can Survive” by Hank Williams Junior and one called “Truck Drivin Son-Of-A-Bitch. They closed their set with one called “Corn Liquor”.

The Urban Pioneers are a never ending road band and I have featured them many many times on here. Every time they come to town I usually go to see them and I truly enjoy crossing paths with them both. I love them very very much, and every time they get better and better. Their album is one of my top choices of 2015 so far, it’s for sure in my top ten albums. Their new album Vehicle In Transit is on Muddy Roots label and you can buy it on their website. They opened their set with “Muddy Roots” off their first album and I was waiting in line for some food and returned to hear them play “Harvest Time”, which is one of my favorites.

“Apparition In The Fog” was next and that’s a good song they play also off their first album. I’m telling you what these folks have a HUGE sound and a HUGE stage show, I love Miss Liz’s dresses she wears and her style of playing. She is a true professional player, probably one of the most talented musicians in Roots Music. She has classical and other styles too, very smart young lady. Mr. Jared is equally well talented in his style of playing and as they went into “Please Give Me A Highway” and my personal favorite song they do “Liz’s Reel” they had that tent jumping around and I couldn’t even get close to the stage! They did “Liz’s Reel” as one of their closing songs.

“Chocolate Easter Bunny” was a song that was given credit to Phil Hummer on the album. And they also did “Found About You”. WOW, It was only dinner time and I already saw so many awesome bands in a place that makes me feel so welcome and comfortable. I don’t go there to drink a lot but I am partying in my own way and enjoying it and I did have a couple good pulls of shine. My next article will begin with a band I recently covered at the Nashville Boogie called the Woody Pines, and it will be coming at you in a few days!