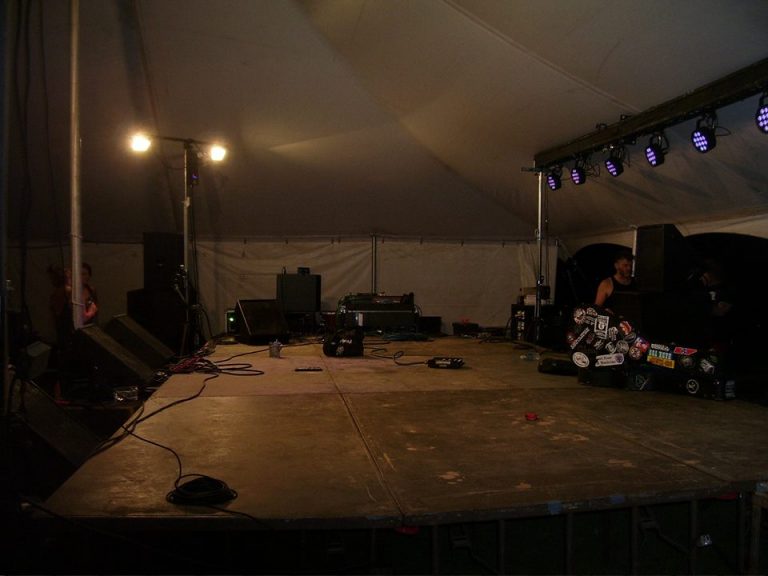 Man the weather is downright gorgeous what a perfect day for a festival! Welcome folks to my first article of coverage for my biggest job of the year 2016 Muddy Roots Music Festival. I’m just getting back into touch with many of the folks here and enjoyed a wonderful pizza at Gondola Pizza House if you are in the area you need to stop there and eat. So as per Mr.Owen Mays I am staying at my usual hotel America’s Best Value Inn right off of 40 on Jefferson Street. We are all out here in the big tent stage where the pre party is going on with James Hunnicutt and Stump Tail Dolly are playing tonight.

I tell you what folks I have so much new information for you and different things to tell you about this year that Muddy Roots has planned and is doing in the future. This year stage 1 was ran by Reelsound Productions and stage 2 and 3 were ran by Chattanooga Pro Audio and they both did a truly wonderful job providing the sound for the bands. I’m going to talk about some of the awesome food and places I visited this weekend, and some of the new albums and new bands I got to cover. Also, stage 3 was managed and ran by Mr. Nick and Miss Kimberly from Cracker Swamp Productions like the last two years. This year stage 3 was open mic sign up was Thursday and man I tell you what there was some truly good people playing on it I’ll touch on all this series.

James Hunnicutt opened his set with one of his signature songs called “My Pain” which he sang specifically for my friends daughter Mickee as this was her first portion of Muddy Roots. Preserving future generations of support for this festival or any festival really is essential for growth. Mr. Chris Warrick and Miss Mandy are great friends I have met through this festival.

Mr. James and I met for the first time on a sad note at Porter Wagoners funeral, in Woodlawn cemetery in Nashville during the Myspace era when all this type of music was taking form. As he played another of the songs I knew “99 Lives” , he absolutely had the crowd captivated. Another song he played that I haven’t heard him ever do was called “Till Tomorrow”. “One Last Kiss” was next and as always it sounded great every time I cover James Hunnicutt shows I am always truly pleased with what I hear. In fact now here recently you can get his albums on vinyl. However I’m sure his cover of “Long Black Veil” was not on his albums.

He was playing a Danzig cover as I was visiting with people and he let the audience recite “Don’t Let Teardrops Fill Your Eyes” and we are doing a wonderful job of doing just that folks, I’m already having a blast out here at one of my favorite festivals ever. He is playing an acoustic version of Judas Priest “Break’n The Law ” complete with solo wow he has really good vocals for that song and that was his closing song of his set.

The next band on the list is a Hybrid band I have briefly touched on in the past and haven’t got the opportunity to cover it yet Stump Tail Dolly. Even the sound check sounded like rolling thunder and doom with a shot of spice. Their first song was called “I’ve Endured” complete with flashing stage lights and effects. Stump Tail Dolly or S.T.D. is a blend of Country and Metal and even Bluegrass. Little did they know that back in 2013 when Bob Wayne brought us Country Legend Red Simpson that this combo would trickle into what is such a different sound outright.

Rusty Knuckles brings us their debut album with 5 songs on it total. And to be honest I been so attentive to their style and chords I am not catching all of the song titles. But these guys and gal are tearing up the tent with ferocious instrumentals. Right now they are playing a song that had a huge video shot for it called “Billy” And as the crowd is moving like a flock of geese they are unveiling a new kind of classic fiddle tunes with their own style and sound to it. This band needs to be included in Roots Music festivals all over because they absolutely are amazing…like tonight’s weather.

What a truly blessed opening for me at this years Muddy Roots. Even the song they are playing now has some funk included in it, I believe she said this song was called “The Bogaloo”. I’m pretty sure the new one they played that they announced will be on their next album is called “America” and after their show I got the wonderful opportunity to talk with Mr. Ryan just a little more candidly than usual, which I enjoyed his views.

I’m going to tell y’all the weather is PERFECT in fact it’s the BEST festival weather I ever witnessed so far in 2016! The hotel is gorgeous and roomy the coffee tastes like pencil lead and my ride was perfect. There was so much going on at once I got some partial set lists and some are out of order but it’s ALL GOOD I think I have a pretty exciting series of articles for those of you that didn’t get to attend this grand event that brings pretty much the entire local music community together into one spot.