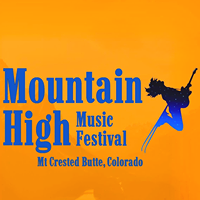 My VERY FIRST festival of 2017 is Mountain High Music Festival in Mt.Crested Butte Colorado and it is presented by Country Music songwriting Legend Dean Dillon who is known for writing hits for George Strait. This event will be presented to raise funds for some local charities like Tough Enough To Wear Pink Crested Butte and also Adaptive Sports Center. Both organizations offer many activities and programs for their patients to continue normal life with their disabilities, and are wonderful charities to benefit from this celebration of music.

According to the website there all of the music will be performed on the mountain, at the base area and also in the town of Crested Butte. Many of the songwriters will tell stories and mingle with the patrons of the festival and to be honest the experience of that alone is well worth the asking ticket price.

Many of you know how my festival series works with all the different links to information of a different festival every week, this year is no exception. I have over 75 festivals to bring you that have REAL Country Music and Bluegrass, Americana and other genres.

So let’s begin with the where, how and when of this particular festival. It will take place January 11-15th 2017 in Mt. Crested Butte, Colorado. You can purchase tickets HERE. ALSO this link HERE will take you to some lodging choices PLUS there is a combo choice with lodging, flight AND tickets. As always I shall research this area and include as many hotel options as I can uncover about the area, I’m ALWAYS researching and networking. The following piece is directly from their website concerning their master of ceremony Mr. Storme Warren.

Storme Warren is the morning show host on SiriusXM’s “The Highway”. He also hosts the longest and most listened to weekly Country Music Countdown show, “The Highway Hot 45”. Along with running his own Television production company, hosting his TV and radio shows, Storme is also known as the “Dick Clark of Nashville” (Tennessean Newspaper 3-10) for his annual duties as host of Music City’s 4th of July Concert Spectacular and the city’s outdoor Downtown New Year’s Eve “Bash on Broadway”. During the summer months, Storme can be found emceeing music festivals from coast to coast and around the globe. With 32 years of broadcasting experience including 24 in Country Music, Storme has earned the title “Country Music’s Best Friend”.

So Now Let’s talk about the lineup for this stellar event this month in this gorgeous environment out there:

Now the initial website doesn’t have any information about specific rules or accommodations for service animals and disabled patrons, also there are no rules or explanation of designated alcohol areas or information on food vendors BUT YOU CAN contact the festival crew HERE with any questions about this event.