My Buddy Mr. Boo Ray Has Made A Holiday Playlist! 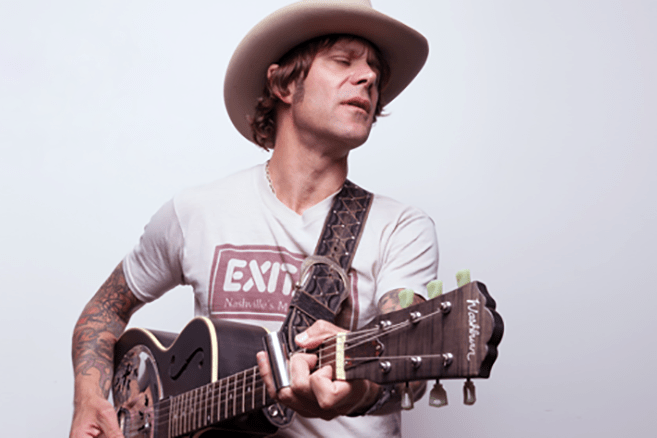 We have a holiday-themed takeover from Nashville alt-country/outlaw artist Boo Ray, who is gearing up to release his latest LP Tennessee Alabama Fireworks (due Feb 15).

“All Strung Out Like Christmas Lights” Because Elizabeth Cook is the coolest.

“Santa Can’t Stay” I love the line “he threw a present really hard and almost hit mama’s new boyfriend Ray”. This song’s full  of Yoakam’s signature rockabilly vocal licks too, which I love. That 80’s production will complement any Christmas sweater, from the gaudiest candy-cane/snowman applique to the homeliest moth eaten Uncle Fester pea-green cardigan.

“If We Make It Through December” Since I was a kid I’ve always liked how contemporary and musical Merle Haggard’s arrangements and songs are. There’s a singer songwriter quality to the Hag and an entire virtuoso ensemble sound akin to the way James Taylor, Leland Sklar and Jim Keltner made music sound.

“Cowboy Christmas” Cowboy songs have some specific criteria for me. The language, vernacular and meter have to be just right. I heard a Tommy Lee Jones interview where said the language of Cormack McCarthy’s characters is perfect. Erin’s Line “Barb wire and fence posts like garland on trees” gets right to me.

“Everything Is Cool” John Prine’s meter is kind of like what Brandlford Marsalis said about Louis Armstrong’s minimalist trumpet playing, “There’s a whole lot of information in those couple of notes.” “I was walking down the road… man” is so plain t’s actually funny” almost like a Steven Wright bit. In contrast, the next verse “I saw a hundred thousand black birds just a flying through the sky- they seem to form a teardrop from a black-haired angel’s eye” is brooding poet/ bleeding heart romantic territory.  I love that Prine covers those two nearly opposite poles of perspective with complete dexterity.

“All The Gifts I Need” Great sounding recording. I dig JD’s songs and style, the way his vocal melody rides on Jason Smay’s drum beat is a thing for sure. The songs got a smart lighthearted spirit to it.

Family Christmas “Opening Dialogue” The first thing that really got to me about Johnny Cash was that antique automotive/farm equipment machine sound that he made with his band, seeming to emulate the sound of V-8 motors, tractors, horses hooves, and the click clack of trains. It’s powerful, clever, creative, real singer/songwriter sounding, intricate and simple at the same time. Then I got into his rockabilly look and wearing all black. But it’s always really been about the sound of his voice and his story telling. Even as a kid I’d watch that gospel series he filmed in Jerusalem because I just liked the sound of his voice and listening to the way he’d spin a yarn.

The Band “Christmas Must Be Tonight” Rick Danko’s bass sound just slays me. It’s the deadest, most flatulent sounding thing ever. I’m damned crazy about it. I dig Danko’s vocal on the verse a bunch and I love how Levon’s accent and tone jump out on “how a little baby boy”… Yeah man this is a perfect ramblin’, good stiff eggnog of a song. Cheers!!!

“Six Feet Of Snow” It’d makes sense to me if someone called Lowell George a musical humorist. His subtle, clever impish wit is my favorite. The honk, and twang of the guitars on this track are funny as hell to me. It’s absurd and wonderful because of it, and Lowell leans into it too with lines like “It’s raining in stilettos from here clear down to Mexico”. Maybe if you could trace the DNA of a particular kind of humor Lowell George and Billy Gibbon might be kin.

“Blue Christmas” The 6th tuned lap steel/dobro can’t help but suggest the Hawaiian pacific sound. And who doesn’t want to wallow in the extra bitter sweetness on another holiday not spent on a deserted island with Lindi Ortega. Can you imagine what she’d look like wearing coconuts and palm leaves? For real though, Lindi Ortega’s Christmas album “Tennessee Christmas” is a blast.

“Baby Please Come Home” I’m crazy about The Mavericks and think they’re on fire right now musically. Raul sings with a belting cheers and the Christmas bells and sleigh bells through the whole song deliver a fully manic holiday experience. Their whole Christmas album is a must have.

“Santa And My Semi” Yep, lets finish off this playlist with a swanky texas sounding Dale Watson number. I dig when certain Texas singers have a particular kind of crooning voice and the way their accent sounds real Trucker. Merry Christmas and shiny side up to all the truckers out there working in to.

Boo Ray – Tennessee Alabama Fireworks (February 15th)
Black mirrors and social feeds have damaged our ability to connect on a deeply meaningful level. Alt-country/outlaw guitar-slinger Boo Ray delves deeply into the dire state of communication in the modern world with his new record, Tennessee Alabama Fireworks. The album plays like a southern gothic noir, and in his own words, explores the “nitty-gritty, guts and ugly parts of the human experience today.” These songs creep into the brain with his most poignant lyrics to-date. Boo Ray is every bit a hard-boiled poet as many of the pioneers that came before him, from the likes of Tony Joe White, Willie Nelson, and Jerry Reed.
Boo Ray fervently draws upon the situations and hurdles that make the world such a difficult environment to navigate these days. Continuing the dialogue from 2016’s Sea Of Lights, Boo Ray dives head first into even more vulnerable territory as he wrangles themes of heartache, reopened wounds, loneliness and swallowing his pride. With “A Tune You Can Whistle,” a raucous honky-tonk boogie that is as sincere and hopeful as it is macabre and melancholic, he laments about “one nation under the influence” of computer screens that have cast our humanity into a shroud of anxiety and detachment. Always self-effacing Boo Ray confesses in the middle-8 “If the pain of the pain wasn’t worse than the pain of the change, not a single damned thing’d be different I’d still be the same.”
“She Wrote the Song” surveys the scene at ground zero, just after impact as Boo Ray sings about true love mangled by miscommunication, dysfunction and addiction. Boo Ray’s strong unique voice carries with it a warmth and wisdom you trust and believe. “Don’t Look Back” is a reeling road song contrasting a weariness from, and an insatiable love for the highway. Boo Ray conjures cinematic southern gothic imagery when he sings, “Ragtop Eldorado floatin’ down the road / Moon lights up the bayou like a dance floor at a disco.”
Tennessee Alabama Fireworks was tracked live to tape over five days at Nashville’s Welcome to 1979 Studio, which has recently seen the likes of Rodney Crowell, Steve Earle, Jason Isbell and many more capturing their sounds within. “Making a record at Welcome To 1979 was a real powerful creative experience,” says Boo Ray. Producer Noah Shain, whose pedigree includes work with fellow outlaws Nikki Lane, Nico Vega, Dead Sara and Badflower, among many others, captures Boo Ray’s full-band storytelling style as vivid cinematic soundscapes that hit right at the heart and pull no punches.
Boo Ray grew up in the mountains a couple of hours west of Asheville, North Carolina, where he began songwriting at twelve years old, learned to play the guitar at fifteen and put a band together at sixteen, playing clubs around the region. In 2005, Boo Ray wandered from Athens, Georgia, out to Los Angeles, where he spent a few years working with a slew of west coast musicians before he was picked up by a bondsman and hauled back down south. In a little bit of a tough spot and needing a ten dollar item to hustle, he slapped together the ten best tracks he had for his first album. With the help of Steve Ferrone, Noah Shain, Paul Ill, Monica Ewing and Producer John “Q” Keggler he released 2010’s Bad News Travels Fast out of a halfway house.
Having learned what a one-sheet was from Hollywood actors & models on the west coast, he shipped 100 promos stuffed with CDs, one-sheets and Moon Pies as his first official Americana Music Association Radio Campaign. As a result of Boo Ray’s amazing songs and his tireless work ethic, his record reached the top 50 and stayed in the Top 100 of the Americana Chart and the Top 40 of the Roots Music Report for an entire year.
His first Nashville record, Six Weeks in a Motel followed in 2012 and gained enough attention to lead to a successful publishing deal, plus the recording and release of Sea Of Lights.
In addition to his music, Boo Ray spends some of his free time doing custom leather work, making hand tooled guitar straps and belts for his guitar picker pals, truckers, bikers, cowboys and rock & rollers. His customers have included Johnny Knoxville, Juliette Lewis, Billy Gibbons, and other household names.
Upon returning from tour earlier this year, Boo Ray went straight into the studio with his band to lay down his next record. His creativity hit on all cylinders, and Tennessee Alabama Fireworks was born out of a deep searching desire to address some grim realities of today’s world and it’s constantly-disconnected relationships. The album shifts between joyous, zen-like optimism (“Don’t Look Back”) and devastating critical care situations (“Outrun the Wind”) that can only come from living life and learning to navigate dark waters. Even considering such hard, inescapable truths, Boo Ray eyes a future full of hope and promise with craftsmanship that is built to last.
Boo Ray has been an official endorser of Olathe Boots since 2010 and has a new shirt line coming soon with Western Ranchwear H BAR C.