My day In Nashville: TONS of local music. 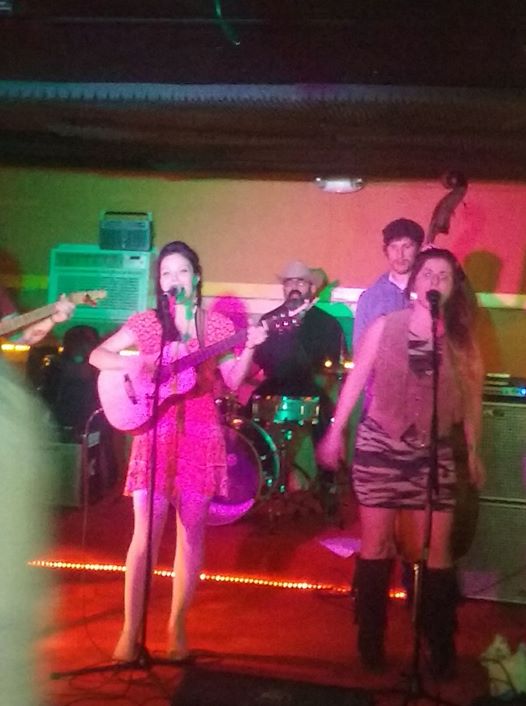 This article shall be all about my day in the Nashville area yesterday as i stopped and caught up with many friends at many places, all in the name of local music. If some of you don’t know one another you need to, and i make these articles to help all of you network better and learn about each others music and businesses.

So I got downtown and in honor of Johnny Cash’s birthday I toured the Cash museum again. There were many artifacts in there that any true Country Music aficionado would appreciate and of course I had to buy some stickers for my collection.

Then I ventured down to The Benchmark Bar And Grill over on second avenue across the street from the Wildhorse. If I’m not mistaken this is the old Picki’n Parlor but I’m not really sure. They had a really nice stage area for songwriters to play for tips, now mind you this is how they make their living down there and playing pop country is what the tourists demand. You can go find original Traditional Country at Robert’s and Laylas, here you listen to both. I did not eat any food there but it did look pretty appetizing and the beer prices were usual.
Miss Mandy Mae Hallman always has had a special place in my life because she reminds me of myself when I first moved to town. I played many venues for tips and roadhouses and dives, I had many bands and played many a cover song before turning to journalism. I just have a knack for Country Music history and delving into other people’s music, and this young lady has NEW MUSIC coming in 2017 and I’ll bring you that in new music features.

Most of you know I was raised in the Wisconsin area not too far from here she was raised just a few years later than me. `So we both love those darn Packers and Culver’s cheese curds, and all that good stuff, she’s talented and pretty, just a downright good soul. You can easily ascertain that she was raised by good people and her original music is nothing less than amazing to me, she did play one from her upcoming album I’ll touch on that song when she releases it.

She played a four hour set with an Okie fellow named Issac Mathews and like I previously said they were playing popular music that was being requested by patrons. Mandy played “Bye Bye Baby” by Jo Dee Messina, “Make Me An Angel” by John Prine and Bonnie Raitt, and she did a good job on that one I might add. ‘Kerosene” by Miranda Lambert and “Wild One” but my favorite one was “Why Don’t You Stay” by Sugarland, I’ll be honest I do like that song. I thought she did a really good job on it.

Issac Mathews played some darn fine Gary Allan songs like “Man To Man” and played the Nitty Gritty Dirt Band “Fishing In The Dark” complete with bass riffs on an acoustic. And he did a damn fine job doing it too, he did a Toby Keith song and then played O’l Red. O’l Red is an newer George Jones song covered by Blake Shelton. I honestly had a good time I would go back to see her play again anytime, I just keep missing her. Yesterday just worked out so well!

The Vinyl Bunker is basically an independent record label store and is the Muddy Roots headquarters. I stopped in to get the Pat Reedy And The Longtime Goners on vinyl, I have them on my stage in Kansas City this year at the Westoprt Roots Fest. Muddy Roots has some announcements coming form him this year SOON and I’ll bring you that as well!

You need to go pick up the new Roots Music guide that Mr. Jason published and I shall be soon adding my contact input into this project to help out touring local music flourish. Festivals..how many of you have emailed me wanting numbers on HOW TO get on the festival roster? Well with this newspaper your manager can.

Live True Vintage is a vintage clothing store run by my good friends Mr. Geoff and Miss Tammy Firebaugh. Mr. Geoff has contributed to Country Music by touring with the tail end of BR5-49 and was on the recording Tangled In The Pines, and now he plays bass with Hillbilly Casino.

I’ll admit when I arrived at Dee’s Country Cocktail Lounge in East Nashville I was greeted with THREE big surprises the first was that my friend Mr.Joe tends bar here and I didn’t know that so I got to spend part of my evening catching up with him. We do not cross paths as often as I’d like them to, the second was the food, you know the menu isn’t the largest but sometimes quality trumps quantity and in this case the Chicago beef sandwich was indeed quality. The third surprise was the jukebox that gives you 6plays for a dollar, now trust me you do NOT FIND that nor do you find this array of quality classic Country Music and not just the same old same old top hits, there are some rare goodies mixed in there as well.

This was a pretty roomy Honky Tonk and was a true breath of fresh air for me the likes of it bringing out my Classic Country geek mode. I could sit there and drink beers and listen to Don Williams and Cal Smith and watch Bonanza ALL NIGHT, Mr. Joe runs a great bar out there. GREAT service and stage facilities at this venue if you ever get an opportunity to go see a show there DO IT!

The Heath McDaniel Band was first and they are from Ohio,they brought an array of cover songs to the show first with songs like “Mind Your Own Business” and “Don’t Think Hank Done It This Way”.  He played “Whiskey Bent And Hellbound”, before playing “Country Heroes” by Hank 3. Not a bad job doing that song either!

He played an original song about his home bar in Ohio called “Good Time Charlie’s”, and being from the Ohio area he played Outlaw Country by Dallas Moore and I have included the video in the article. He played a version of “Georgia On A Fast Train” by Billy Joe Shaver.

The song “Everyone Wants To Be Hank But Nobody Wants To Die” was pretty much a true song. I don’t believe I have to elaborate much on the meaning of that song. He then played “The Ride” and followed that with “All My Friends” by Hank Williams Jr along with “You Never Even Called Me By My Name”. This is apparently becoming one of the local hangouts as some of us are looking for free parking and a roomier venue to drink and enjoy local music, Mr Joe is doing a fine job here! Quite an impressive crowd here tonight and reasonable food prices make this venue a SURE BET. He closed his set with a song called “You Can Have Her”, and Merle Haggard “Think I’ll Just Stay Here And Drink”.

Next up is a man named Mr. Crash Hamilton who will be doing a few before the Bucksnort Beauties go on tonight. As some of you might have seen on social media this is the official release of Wildfire And Moonshine which is their debut album. I was invited by Miss Rebecca Jed and Miss Mae Bliss tonight to cover their event and so far I am glad I did I’m having a wonderful time here.

They call him the guitar wizard and he hails from Mississippi, once you hear him play his blues you can easily ascertain his influences and style is all his own. I am noticing a truly warm and special guitar tone from this man with leads that are just absolutely amazing.

Miss Rebecca Jed and Miss Mae Bliss make up the Bucksnort Beauties who invited me to come work for their show tonight. She played Defeated Lonely And Blue from her album and this video is from her third song called “The Hell With All Y’all I’m Going Back To Arkansas”.

They have really good harmonies on the song “Whiskey Night” and the other I really enjoyed was the fact they are performing all original songs tonight like “Spit On The Diamond”.  Rebecca Jed is showcasing portions of her album like “Zachariah Harris” and they did play a cover of “I’ll Be There”. The name of her album is called Wildfire And Moonshine and the album has six tracks on it and was released officially tonight.

The Worlds Greatest  Eagle Scouts were next tonight and this place went wild. They are more of a jam band than anything with songs like “Tell Me Mama” that were almost five minutes long laced with more guitar solos and harmonica than anything I have witnessed in quite some time. Basically it’s members of the Blackfoot Gypsies and rotating band members and songs that are just pieces slapped together.

This band is loud I mean like Sim Cesna’s Auto Club loud people and they are high energy fast paced rock and roll. Most of their set was long instrumentals with two lead guitars one of them being a pretty mean slide guitar complimented by one of the meanest harmonica players I have ever witnessed.

I’ll be honest at this point in the evening my phone was so weak and their songs are so incredibly lengthy I do not believe I can even capture any of this on video, being a side project I wasn’t quite sure what I could print about this band.