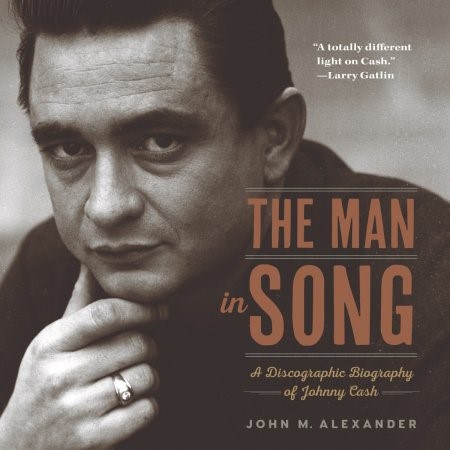 I literally have a waist high pile of books written about Cash directly or indirectly but this book takes a whole new approach to his life through the prospect of his songs. This tome is the very first of it’s kind to view the subject from the angle it does right here, in fact it’s really hard to illustrate it in writing without copying him word for word. In essence her studied Cash’s life from his Arkansas childhood of depression era hard times all the way to his 2003 death, and all the way along he touched on well known and obscure songs, and WHY CASH recorded them.

This man spent years laboring on breaking down Cash’s plethora of songs into chapters of autobiographical, geographical, story and societal songs. It even covers songs I has to delve into like  “Melva’s Wine”. It has one of the most organized platforms I ever read on any echelon for a book of this type.

It chronicles the historical periods of his Sun Records years and of course the 1968 prison recordings from all of the penitentiaries he recorded live material on. It includes deep catalog cuts and rarities, along with many collaborations with other iconic songwriters and stars like Kris Kristofferson and Tompall Glaser.

During his time with  Readers Digest he assembled many different Cash boxed sets and during the production of one of the boxed sets Cash himself asked if he could select some of the songs to be included. He also requested that the name be changed so as not to offend other songwriters, making an iconic boxed set.  Dr. Alexander stated that his only regret here was he was slated to chat with Cowboy Jack Clement, who passed away before they could talk.

Dr. Alexander said now hopefully people will view Cash through a different spectrum and delve more into his more obscure songs for a change.