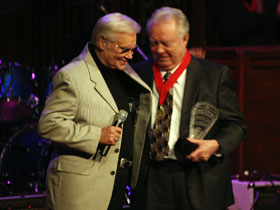 Folks I will admit I am a tad bit behind on the website work, I’m still battling a few small medical issues and I shall return in heavier detail soon. Tonight as I was working (the perils of working second shift) I found out that one of Country Music’s greatest producers and perhaps it’s greatest songwriter died this morning at age 78.

Billy Sherrill was on one side of the court on the Outlaw Country Music creation as far as producers go while Jimmy Bowen was on the other side producing Hank Williams Jr. I often say in my articles that Country Music has three foundational building blocks, the producer, the songwriter and the steel guitarist. If you have all three you have a classic like Willie Nelson’s Red Headed Stranger which in my opinion was and still is the greatest Country Music album ever recorded.

Billy Sherrill was one of the top producers to ever place his name on a Country Music album, and is quite possibly the person most responsible for the creation of Outlaw Country Music. In 1964 a man named Donald Lyttle got his stagename from local boxer in Chicago and legally changed his name to Johnny Paycheck upon the urging of Billy Sherrill and the rest of THAT is history! Billy produced most of Johnny Paycheck’s studio albums and wrote my favorite Paycheck song “When I Had A Home To Go Too” with another producing legend Glenn Sutton who was married to Lynn Anderson. The two paired up to write more hits such as “The Outlaw’s Prayer” and more.

Billy Sherrill also was responsible for Tammy Wynette’s stagename urging her to take on the name Tammy and also produced most of her studio work as well as George Jones Outlaw era albums. He wrote “He Stopped Loving Her Today” which in many opinions is the greatest Country Music song ever written. In mine I’d have to pick a Hank Williams song BUT it’s a close second! And honestly I don’t think George would even mind, and in fact would probably agree.
He spent 20 years producing George Jones albums beginning with his collaborations with Tammy Wynette.

Most notably one of his greatest songs he wrote was originally recorded by David Houston and was called “Almost Persuaded”. That song was one of the top three most re-recorded songs in Country Music history having been cut by 21 artists in it’s tenure. Also in 1967 he wrote the only top 20 single Jim and Jessie McReynolds had called “Diesel On My Tail” both of those he co-wrote with Glenn Sutton as well.

Mr.Billy has been inducted into three local Halls of Fame: the Nashville Songwriters Hall of Fame in 1984, the Musicians Hall of Fame in 2008 and the Country Music Hall of Fame in 2010. At the time of his death, he had been in retirement for several years. In my eyes you cannot open up your vinyl collection and NOT see his name 20 or 30 times if you are a fan of Country Music like I am, it ranks up there with Jerry Rice and Buddy Cannon.

He produced some of David Allan Coe’s work, some was produced by Ron Bledsoe but he did indeed contribute production to some of David’s finest albums. In addition he produced “Behind Closed Doors” for Charlie Rich which was another top classic album in my opinion. I could literally go on and on about his contributions to the genre and I might do that in the future…for now I shall just say farewell and God Bless You for what you have given us.