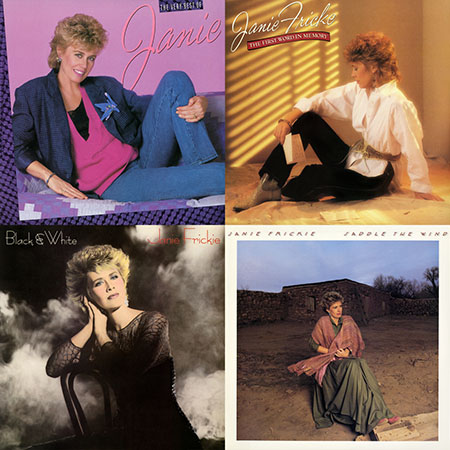 Now mind you folks this was in October that this transpired and I have been battling some personal issues so I have to play a little catch-up with some news articles on here. It was announced recently that Country Legend Janie Fricke has digitally re-released four of her classic albums from her tenure with Sony Music and for the first time ever the albums The First Word In Memory, The Very Best of Janie Fricke, Black & White and Saddle in the Wind will be available to fans on Spotify and Apple Music, among others.

You know I have always enjoyed the overlooked female Country stars of the 1980’s like her and Holly Dunn and Highway 101, and more. Back when TNN first came out there were SO MANY damn fine ladies singing regular Country and some pop Country that was equally stellar in quality. She’s not a name you hear very often and back then it still wasn’t mentioned very much and I never quite understood WHY, she was and still is wonderful.

This from her press release:
The collection includes many of the 18-time chart-topper’s biggest hits, including “It Ain’t Easy Bein’ Easy,” “Tell Me a Lie,” “She’s Single Again” and more (see full track listings below). Beginning her career as one of the most sought after background vocalists in the genre, the platinum-selling singer would go on to become a trendsetter in country music in the 80s, creating a legacy that continues to live on. Fans of all ages can relive the reign of the country music legend on their phones, tablets, computers and everywhere in between!
The First Word In Memory Track Listing (1984)
Talkin’ Tough
The First Word In Memory Is Me
One Way Ticket
First Time Out Of The Rain
A Love Like Yours
Your Hearts Not In It
In Between Heartaches
Another Man Like That
Without Each Other
Take It From The Top