Catching Up With Josh Morningstar. 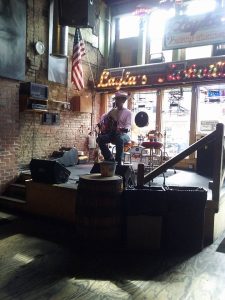 One of the people I met those years ago in Altamont when I decided to relaunch this website under my own control was none other than my artist of the year in 2015 Josh Morningstar. I tell you what he is one of the local people that I have had the opportunity to see in seven different states in the three years we have been friends.

I’ve witnessed him succeed and fail on so many music ventures that I couldn’t sit here and write about them all, and I have more funny stories about him than just about anybody. Ohio, Alabama, Georgia…we have been through them all together. We shared a few motel rooms and lots of laughs, and almost had to team up in a fight one time, been to MANY festivals with me and we both beat the devil himself in the form of the dope.

He bought me a steak sandwich once at Outlaw Fest and we ate vendor food in the pouring rain, we had a few beers together in Ohio at bobby Mackey’s one of the greatest Honky Tonks around. I caught up with him a few weeks back and I’m sorry about the delay in this article but I’ll be honest, my health issues have become poor and I had to make some personal lifestyle changes in my diet….or die. So I have been dealing with some inner demons again but with some help I’ll change them and become a more effective tool for local music.

I went downtown Nashville to see him play a set at Layla’s on Broadway this time where I like to frequent when I can to see the likes of the Eskimo Brothers and Sarah Gayle Meech, and many more. The main reason I wanted to write this is to let you know about a few songs he played I have never heard him play live yet. You know a lot of songs he does that are covers are really in sunk deep into the depths of his wide knowledge of Country Music history, and we relate well with each other in that aspect.

Mr. Bojangles by Jerry Jeff Walker from 1968 was first and he played an old Frankie Miller song called “A Bottle Of Whiskey”. He played a Bobby Bare song that Shel Silverstein wrote called “The Winner”, which in truth Shel Silverstein wrote many many songs for Bobby Bare. One of the originals he played that I haven’t heard was called “The Money And The Miles” which Mr. Josh wrote after a talk with Bobby Bare and that was his advice to him, and it was followed by another one I never heard called “Tired Of Living These Songs I Sing”.

“Sellout Sellebrity” and the ever popular “As Long As You Ain’t Coming Back” are two staple songs he does in a good set, and the one I requested was “Dope Sick Blues”. It’s off a smaller EP he released a while back when we first met. He played a few more covers by Don Williams and Hayes Carll before playing a ton more of his originals.

“My Father’s Son” was one but the next one called ” My Dreams Can’t Be Your Cross To Bear” was a truly good look into his mind and how it feels when he’s out on the road all the time. “Still Crazy After All These Beers” and “Cocaine’ were songs that followed along with his newest song he released on a music website that was a tribute to the great Merle Haggard called “Merle Haggard Died Today”.

He closed the set with his new song called “I Outlived Hank And Jesus” and as always he played “I Saw The Light”. He is currently touring and doing some shows with Country Music Legend Billy Don Burns and you can see their show dates on either of their websites.