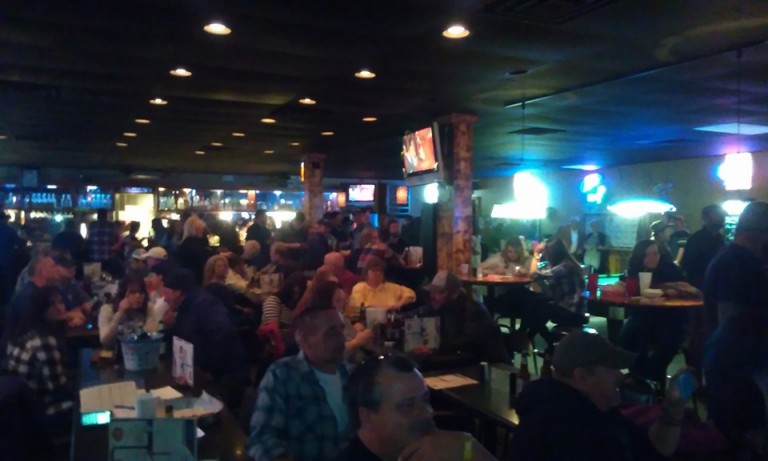 Well folks here I am with the gang again at Spillway Bar And Grill on a chilly weekend night,this is my first time covering Jericho Woods and also Mud River Revival’s new drummer Mr. Matt. So needless to say I am pretty stoked for tonight’s show and as always I have to give the food here very good mention and this is indeed my favorite venue in Bowling Green for many reasons.

The first band tonight is John King And The Mud River Revival, now two of these bands have earned a spot on my Top 50 albums of 2015 if you recall. Right now they are opening their set with ” I’m Gone” and they went into a cover of Eddie Rabbit “Driving My Life Away” which sounded great. This place is packed and this band is truly making quite a local name for themselve, Its time for these guys to get some festival spots and grow..It’s time for step four for this band. Right now they are playing a song they shot a good video for called ” Man On The Mountain”.

“Nowhere Ky” is what is being played right now and they followed that with a new song called “Dutch Creek” that will be planned to be on their new album. “The Elder” was a song I do not rightly reckon I have heard them play live yet if I have heard it I just didn’t recall it. My favorite song they play is their second video called “Drag The Green River” I tell you what they are maintaining a pretty good sound consistency every time I hear them. And now they are playing another new song called “Mud River Revival” there was no mention of it being included on the new album.

They closed their set with “Gimmie Back My Bullets” which is a cover song from Skynyrd. I enjoy this band because I basically don’t hear a whole set of covers and instead I am treated to original songs and that’s truly what I !look for with local bands. You can pick up a copy of their album “Write The Wrongs” at one of their shows or at Mellow Matt’s local music store.

This next band has been on my radar for some time now from here in Kentucky called Jericho Woods. They opened their set with ” Clear Cut” and right now they are playing their title track from their album called “Same Old Dirt”. They have a really tight knit sound and the crowd is getting into their music for sure…I know I am and I would pay to see this band again for sure.. Just some damn feel good beer drinking music.

” She Don’t Need Me Anymore” showcases their sound really well and they are having fun up there performing a good set playing covers for us from John Cougar Mellencamp and they followed that with a really good original called “Happiness”.

” I Will Find You” is a new song they are playing right now as I’m also watching football..if you can fathom the chaos in here right now. Along with the good old fashioned Orange Blossom Special and a song I don’t believe I ever heard a band cover which was “A Thousand Miles From Nowhere” by Dwight Yoakam. They closed their great set with a song called “Memphis” and then Dallas Moore requested “Stuck Here In Bowling Green”. All together my initial verdict of this band is one of great fun, they kept me hopping in my seat and upbeat, GREAT choice of obscure covers yet the crowd actually recognizes them on the same token.

The mighty Dallas Moore is up right now and the dance floor immediately filled up with people I swear you can’t see the band it’s that crazy. He is playing ” Bloody Mary Morning” to a packed house tonight. Man what a show already before the set even started, does that make any sense people?

This time I got to hear his new single called “Shoot Out The Lights” with a full band. And now he is playing “Twisting Through Texas” which is getting major airplay on XM radio right now and is on top of the views, he is dwelling on his Dark Horse Rider album which also earned a spot on my Top 50 and we’ll deserved… Because “Raisin Hell And Slinging Gravel” was next and that song got the place going hell raising nuts.

“Up On That Mountain” was next followed by “when I Took Out The Trash”. He’s playing some rare ones that I haven’t got to hear live in quite some time,” Great Big Woman” was one of them and still even this late he is tearing this place apart with “Hot Bolded Mama”. He’s playing ” Outlaw Country” which is a song he wrote with Billie Gant, and followed that with “Heaven Can’t Be Found” by Hank Williams Jr. much like the other bands tonight the cover tunes we DID HEAR were well chosen and well placed within the sets.

“Works For Me” is one that has the crowd singing along with right now, he is playing a Chris Knight song and followed that with another new song called “Madam Sam”. They are now doing instrumentals for us, along with ” Freeborn Man”. He recorded ” Crazy Again” with his Godfather Country Legend Jody Payne him he said would have been 80 this year.

“Blessed Be The Bad Ones” was one of the first songs I ever heard Mr. Dallas play at Altamont, that was the album he was promoting when I initially met him and began supporting his music. The Cincinnati local music scene is truly one of the most intriguing ones that exist, to this day I have always said The Tillers album ‘Live At The Southgate House” was an underground classic. He closed his epic set with a lengthy version of “Whipping Post” and another instrumental acoustic song that incorporates his evident influence of Classical Music and other genres rolled into one, which he calls “Strangling The Strings”. I highly suggest you pick up all these fine albums at your local record store NOW.

Last night’s turnout was evident that local music is still appreciated and wanted, and hell with the NFL playoffs going on and food that good HOW can you NOT have a good time? Outlaw Country Music with good looking gals dancing and the Packers throwing hail marys with 20 seconds on the clock…and wings that will make you slap your Mammy.