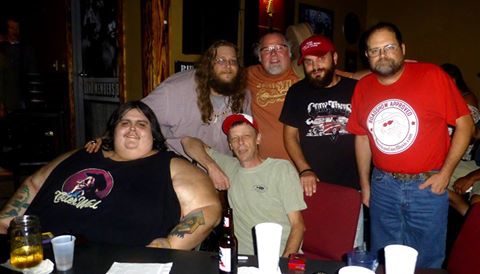 Spillway Bar And Grill Is the place to be tonight for another songwriters night. joining us for tonight’s entertainment is Mr. Keith Hurt, Mr. Mark Beagle and Mr David Vaughn Lindsay which tonight will be my album review of his new release called “Next”.

Once again like last time they turned off all the televisions and talking was kept to minimum. He opened the show like all the other times and explained how things work for this event. They moved all of the tables back down on the dance floor, to make a better ambiance.

As always the food was exceptionally good, I HAD to come down and get some wings and cheese sticks, the sound was absolutely wonderful like it always has been. You just cannot go wrong on a hot Sunday afternoon with good food and a cool bar, and some GREAT acoustic music.

Mr.Keith Hurt started out the rounds, and they all three took turns playing one song a piece. However to make this article a little easier to follow for YOU as a reader, I’ll write it as though each artist played an entire set at one time. Mr. Keith has a real elaborate style and vocal delivery, however his songs were very easy to enjoy.

He began his set with a song called “Wanna Be Somebody’ and then played a really pretty song called “Hummingbird” which included some very nice guitar playing. He then went into a short story about how he found a sugar bowl at a yard sale that he kept some personal items in….the song was called “Sugarbowl”.

This video included in this show is from his song called “Angel Kisses” . The song he played after the break was called “Ain’t It Cool” followed by a song that showed off his vocal abilities really well called “That’s A Good Thing”. Mr. David’s guitarist Mr. Dale Adams added some incredible leads to that song…and the amazing thing was they NEVER MET.

He closed with several more songs filled with intense guitar playing and growling out some of the lyrics with passion, I’m pretty sure the last one was called “To Get You By”.

The middle bar stool tonight was occupied by the big man that is mentioned in the new Colter Wall album called ‘Big Dave”. Mr.David Vaughn Lindsey who like I mentioned just released an album on Young Mary’s Record Co. called “Next”. I purposely waited to speak about this album until now for this reason.

This record really captured his vocals really well, and the songs were all well written, “Love 2 Hate” was easily relate able to me, I have burned many A midnight oil…MANY all nighters to pull off this website. I’m one of the ones that some people love to hate, because i’m not afraid to be myself.

I recall his visitation services being VERY hot out and as soon as it was finished it came a hard rain, many friendships were rekindled that afternoon. He also played a song called “fighting For What I Did”. After the break the first song he played was called “Walking The Same Road”, and he said this was a rare song to find on CD.

He brought a really fine guitarist along that had some really good harmonics and some really good vocal accompaniments to Mr. David, and as I stated he added leads to many songs tonight. he is now playing a song called “Fool Like Me” from his Shot Time And Cigarettes days.

He played another song off the new album about making reoccurring mistakes called “My Bad”, and he closed his set off with a song from the album called “Every Day”. It was pretty enjoyable to witness the entire album played just acoustic, to be honest it is my personal favorite choice for musical expression.

The third spot on tonight’s Songwriters show was occupied by Mr.Mark Beagle who had some fine remarks about one of the local Legends around here Pat Haney who played the first Songwriter show, you can read more about that HERE. In my opinion later on in the evening he played the best song out of all of them, it was a well written uptempo spectacle of greatness!

He used the name Lee Harvey because someone told him he looked like Lee Harvey Oswald, however now he uses Mark Beagle. His first song was called “Cadillac’s To Town” followed by one called “Worn Out And Tattered”, and another called “Bartender”.

“Johnny Walker” was another great song he played, but I’ll be completely honest one of the last songs that he played in his set was a Bluegrass tune called “Blue Eyed Queen”. And that song was BY FAR the best arranged and most well written song of the entire round.

To be honest I think “Carrie Brown” is one of the coolest Bluegrass tunes ever, and I want “Pilgrim” played at my funeral. He also had one song called “Truck Stop Queen” and another called “whiskey River” (Not a cover of the Willie Nelson song).

All in All people the Spillway is a terrific place to see live music of any type, because the food is beyond amazing. The entire ride up there I’m always in a quandary as to what to eat!