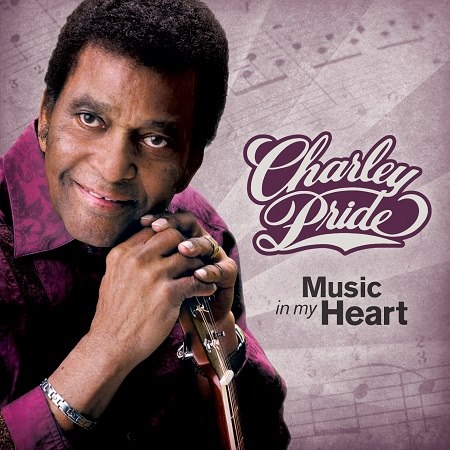 There are few living legends left in country music.  Charley Pride is one of them and could be on the verge of making a comeback.  Charley Pride has enlisted acclaimed singer songwriter Billy Yates as the Producer of his latest album “Music In My Heart” with the goal of creating the best traditional country music album possible.  I feel like they succeeded in a huge way.

There isn’t a bad song in the 13 tracks that make up the album.  Pride and Yates chose songs from some amazing songwriters such as “Whispering” Bill Anderson, “Country Johnny Mathis, Tommy Collins and Ben Peters who wrote one of Pride’s biggest hits with “Kiss An Angel Good Mornin’”.  Songs like “New Patches” and “All By My Lonesome” feature some great fiddle and steel guitar playing while ballads such as “I Learned A Lot” bring in strings and piano.  Charley Pride’s voice isn’t what it used to be, but Billy Yates works his magic to get the most out of it.  It reminds me of how Rick Rubin got the most out of Johnny Cash during his last recording sessions.

Some of my favorite tracks are “New Patches”, the title track and “The Way It Was In ‘51”.  That song paints a good picture and takes you back to the old days, even if you weren’t around to experience them.  It is reminiscent of Jamey Johnson’s “In Color”.  Songwriting is a high point of this album.  Charley Pride and Billy Yates chose songs which bring the traditional country sound they were after and highlight Pride’s amazing voice.  You wouldn’t know he was 83 listening to this album.  He’s certainly not in his prime, but he sounds like he should be in his 60’s instead of his 80’s.

It has been six years since Charley Pride has released an album of new material and it has been worth the wait.  The good news is that work has already begun on the follow-up which Pride plans to release next year.  Can an 83 year old make a strong career comeback?  Only time will tell, but if this album is any indication we could be in for so.

Track Listing:
1. New Patches
2.Make Me One More Memory
3.Natural Feeling For You
4.All By My Lonesome
5.It Wasn’t That Funny
6.The Same Eyes That Always Drove Me Crazy
7.I learned A Lot
8.You’re Still in These Crazy Arms Of Mine
9.The Way It Was In 51
10.I Just Can’t Stop Missing You
11.You Lied To Me
12.Standing In My Way
13.Music In My Heart