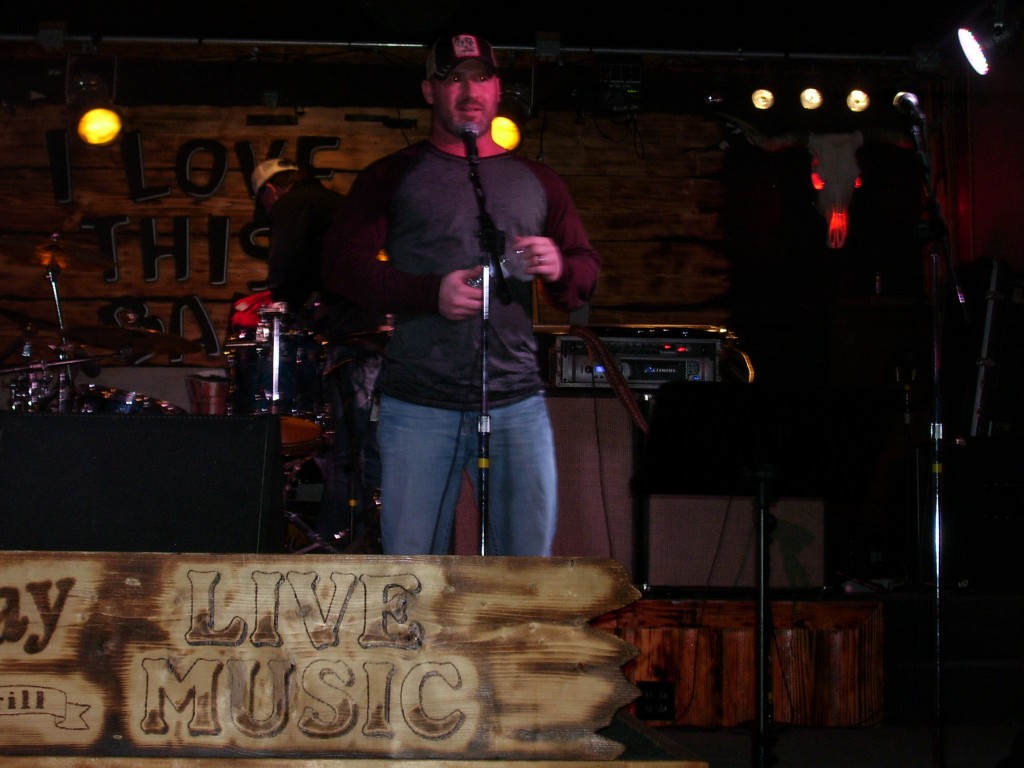 Folks I am once again at the Spillway Bar And Grill in Bowling Green for some local bands before the dancing outlaw himself Jesco White takes the stage. I finally got the chance to catch Eric Strickland alone for an acoustic set. I really enjoyed the way the stripped down set showcased his vocals on the songs,and he sounded really good here tonight. He is currently doing shows without his band the B sides and this was the first time I saw him solo.

He and Kendra Hope are doing some shows together in the meantime and he is still promoting his new album Revelate. In fact his first song was “Aces And Eights” which is the first song on the album and he followed that up with another called “Skeletons”.

His third song was the title track from his album “I’m Bad For You”, which sounded really good
acoustic and he did the song called “Already Gone”. He closed his first part of the set with “Lucielle” before he brought up Kendra Hope and I have never covered her set before so this was an added plus here tonight folks.

I’ll be honest I was not expecting this kind of sound or style out of her but being brought forth with Eric Strickland I knew I was in store for a real treat. she began her set with an original song called “Tumbleweed” and another called “Small Town Boy”

She played the cover Good Girls Gonna Go Bad by Tammy Wynette and followed that with an original called “Fortune And Fame”. They performed a set together and played Jackson by Cash and June Carter, and the original song “Strangers” off his new album as well. They played Outlaw Women together along with “Don’t Think Hank Done It This Way”. I tell you what I will be featuring Kendra’s set again really soon. All the local music beforehand was some of the best music I have been to in quite some time.

John King And The Mud River Revival just keep getting better and better every time I see them do a show. They really packed the venue for their album release show and they have been quite the buzz of the local circuit around here. They opened their set with “I’m Gone” and “Nowhere Kentucky” both of those being on their debut album “Write The Wrongs”.

One of the covers they did was “Driving My Life Away” by Eddie Rabbit, and followed that with the song they recently shot a video for “Man On The Mountain”. They are developing their own style and sound that is distinguishing them from other bands and in their song Drag The Green River I can certainly say they are becoming a force to be reckoned with.

“Workhorse” and “Elder” were songs from one of John King’s previous bands but were included in this evening’s set as well as another song they are currently working on the video for called “Drag The Green River”. They played several more songs before closing their set with a Lynyrd Skynyrd cover called “Gimmie Back My Bullets”.

This evenings crowd was indeed one of the largest I have ever encountered at Spillway and although it was difficult to move around up front I still managed to capture most of the goings on. Shot Time And Cigarettes were next before Jesco came out.

They started out with “Ain’t Living Long Like This” and my favorite song they do called “Burn It Down”. They sounded good up there last night playing songs like “Shotgun Fever” and “Fool”.

Moving along into their song “Heathern” it quickly became on of my favorites along with “Let Go Again”. Then they played “I Can’t Quit Drinking” and a really good song called “Mr. Jones” and they closed their set with “Need Your Body”.

They brought out The Dancing Outlaw Jesco White following all the great local bands and he danced for over an hour to songs like ZZ Top’s “Sharp Dressed Man” and of course Hank 3’s “Straight To Hell”. Along with telling a few jokes and his harmonica playing it was a pretty good finishing touch to an already great show, we had a truly fun time and I thank everybody involved.