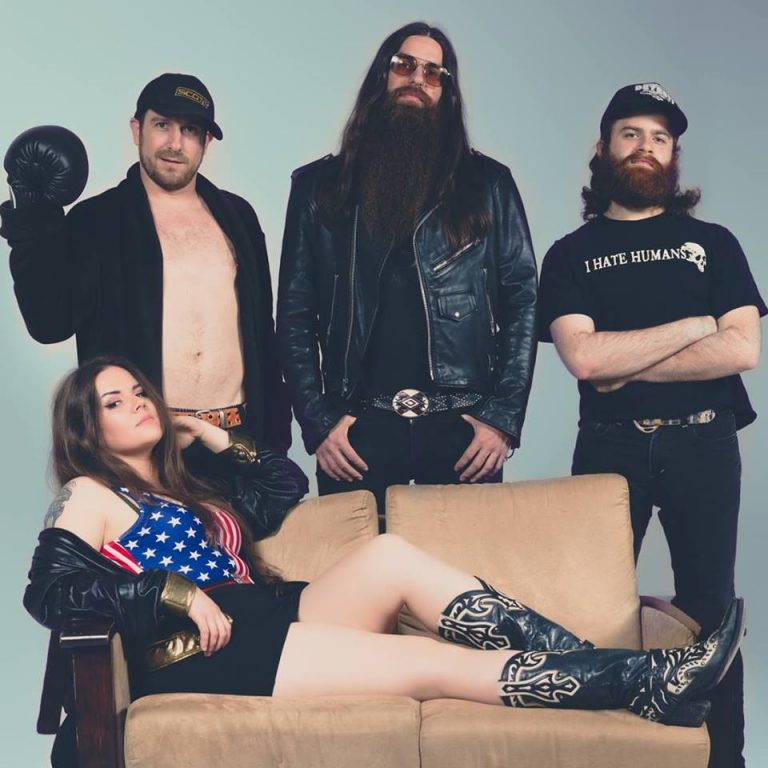 Right now folks I’m getting geared up and focused on The Muddy Roots Music Festival where there are MANY bands putting out new albums in the field next week. One of those said bands is the mighty juggernaut we all have become to know as Stump Tail Dolly or STD.

Now their OFFICIAL release date overall is during Muddy Roots at 8:30 on Friday at the Cracker Swamp Stage. However there IS a Nashville release party at the Springwater Super Club a venue so old the owner doesn’t even know when it was actually built.

After Muddy Roots, they will be embarking on some tour dates with fellow Rusty Knuckles label mates Whiskey Dick and Mr. James Hunnicutt.

So at this juncture I’m going to turn it over to Mr. Joshua Wallace who wrote a truly fine review of their new album aptly called “Soundtrack To The Second Civil War”. He does a lot of damn fine work for me so I can steer my attention toward other ventures.

When I first heard Stump Tail Dolly’s debut EP titled Americonoclasm, I loved the sound but felt it needed a bit of refinement. The metal and roots aspects clashed more than they worked, but with the right guidance they could have something. That guidance comes in the form of Jack Gibson, bass player for the metal band Exodus who produces their first full length LP titled Soundtrack to the Second Civil War. The difference between the first EP and their debut album is great.

First things first. Stump Tail Dolly isn’t country, or roots. It’s a blend of elements from country, metal and roots that works better than other bands who have tried. Stump Tail Dolly is based out of Nashville, TN and are Ryan Clackner on guitar and vocals, Lucy Cochran on fiddle and vocals, Jamie Garry on bass and Brian Weinberg on drums. You mix some amazing fiddle playing alongside some crushing riffs and vocals from both Lucy Cochran and Ryan Clackner and you have Soundtrack to the Second Civil War.

The album starts off heavy and doesn’t let up. Opener “Atlantis” is much more metal than roots. However, Lucy Cochran is not lost contributing some haunting vocals and there is an amazing fiddle / guitar solo that just works. It brings an old fashioned hoedown to an otherwise super heavy track. The album’s lead single “Boogaloo” is a bit on the opposite spectrum. The roots influence is more there, but it’s still a crushingly heavy track. This song reminds me of Primus in style with a funky groove over the verse giving away to heavier riffs with Ryan Clackner’s screaming vocals over the chorus. There are some breaks in the madness with “Ook”, “Pik” and “Hunt The Buffalo” serving as interludes. These tracks are much calmer fiddle solos that can provide a break from the mosh pit.

Whether it’s a more metal track like “Twang Diddle” or a more roots influenced track like “Cumberland Gap”, Stump Tail Dolly will resonate with the crowd of metal heads who have been turned on to country music and punk influenced roots bands. I have yet to hear a band that has successfully blended metal and roots music in this fashion. This is more than roots music with distorted guitars or metal with a banjo. Some have come close, but none have found the sound that Stump Tail Dolly have created. I’m looking forward to hearing more from this band.