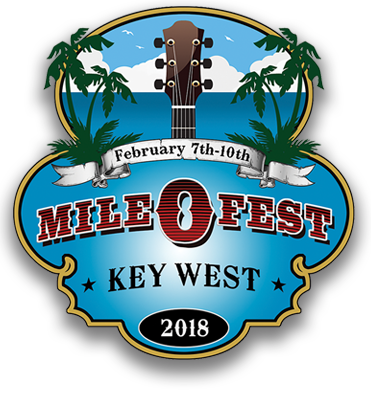 By Mr. Joshua Wallace:
The inaugural Mile 0 Fest is going to be in Key West, FL next year and this looks like an amazing lineup the likes of which the southeast has not seen in a very long time.  We’re talking about the very best in red dirt and outlaw country coming together on a small island that is already one of the nation’s biggest party towns.  This lineup has Turnpike Troubadours, Cody Jinks, Pat Green, Shooter Jennings and Jason Boland & The Stragglers just to name a few.

This is shaping up to be one of the biggest destination festivals for red dirt and outlaw country fans in 2018.  They even have names that never make it into Florida like Cody Canada and The Departed, Dalton Domino, Mike and the Moonpies, Bruce Robinson and William Clark Green.  Even if some have made it to Florida, I would bet that very few have been south of Orlando.

I love the location this festival is in.  It’s not in some field where you are likely to be carried away by mosquitoes, it is in Key West, FL.  Key West has amazing night life with the bars up and down Duval St.  This festival plans to use a few of those for their side stages which sounds like an amazing way to use the local hot spots.  The main stage is in the newly built Truman Waterfront Park Amphitheater which is a key feature in the city’s new waterfront park.  If you have never been to Key West or the Florida Keys, I highly recommend making this festival a long vacation so you can take time to enjoy the scenery and surroundings before or after the music.

Mile 0 Fest is being held by OhWook! Productions.  Festival passes and travel packages which include hotels go on sale on August 25th.  There are options for a 4 day General Admission pass, gold and platinum VIP options and packages which include a hotel.  I highly recommend the options with hotel included because it might be the best price for a hotel on the island during the fest barring the nearby campgrounds.  Mile 0 isn’t done yet.  Keep your eyes peeled for further lineup announcements because what they already have looks amazing.