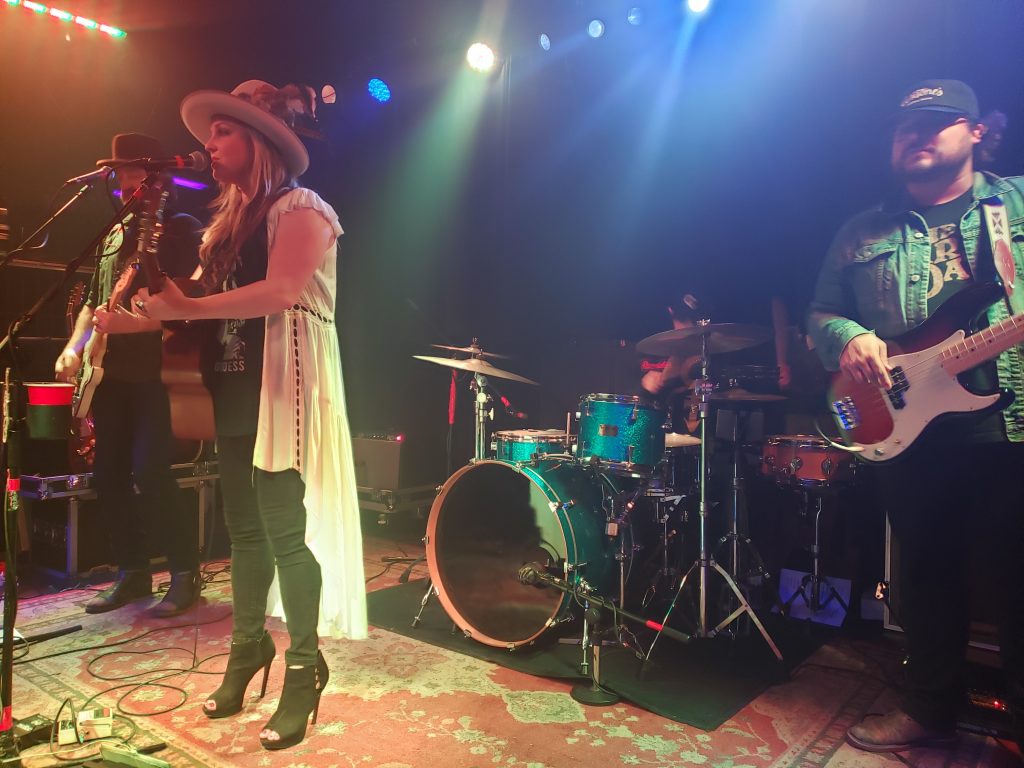 On February 23rd, 2019 we were lucky enough to have Sunny Sweeney down here in Valdosta, GA at the local dive bar called Ashley Street Station.  I had just seen her open for Cody Jinks at a sold out Florida Theater in Jacksonville, FL for nearly 2,000 people and this was a much different show.  This was a much more intimate, more rowdy and more rockin’ set.  Ashley Street Station holds around 200 or so on a good day and this was a good crowd.  The night opened with W.D. Miller playing some original tunes followed by local singer Jen Anders.  Following that, Sunny came on and rocked the house for about 2 hours straight and it was a good time.

W.D. Miller started the evening off and played a few tunes off his 2018 album “Burnt Bridges and Broken Hearts”.  He played originals such as “Samael (My Name Is Sam)”, “Barroom For A Shelter” and “How In The World”.  One of the highlights was during “Samael (My Name Is Sam)” when W.D. went off mic and his voice filled the room with song.  Jen Anders followed with another short set.  Her set contained mostly cover tunes mixed in with an original or two.  The covers Jen did were all in her acoustic style and she got the crowd ready to go with her acoustic renderings of familiar songs.

Sunny Sweeney took the stage shortly after Jen Anders and got straight into it with the first new song of the night called “Tie Me Up”.  She played about 5 new songs in this set list and each of them sound amazing.   I for one cannot wait for her next album.  She also got to some highlights from her last album Trophy with tracks such as a couple of favorites of mine, “Pills” and “Pass The Pain”.  I love the stripped down guitar version of “Pass The Pain”.  It’s a different sound from the original and I like when bands can bring something different live.  She also did a great cover of Don Williams’s “Tulsa Time” which I enjoyed.

At some point in the set, the band requested tequila shots.  This is a common occurrence at a dive bar, so nothing new here.  At some point later, shots turned into bottles, again nothing unusual around these parts.  Things got interesting when the band discovered a scorpion in one of the bottles of Jose Cuervo.  Sunny challenged a member of the audience to drink it for a free t-shirt.  You know what? Someone actually did and it was crazy.  These are the kinds of things that can happen when you see someone at a small dive bar such as Ashley Street Station.

Sunny Sweeney and a bottle of tequila on the floor

The band got to some other newer songs on the set list as well including “Body In A Box Car” and “I Drink Well With Others” which will appear on her next album.  She also got to some deeper tracks like “Uninvited” from her Provoked album and “Staying’s Worse Than Leaving” from her 2011 release Concrete.  This deeper set was heavy on tracks from her Trophy album as the band also got to “Bottle By My Bed”, “Better Bad Idea” and “Nothing’s Wrong With Texas” to name a few.  It wouldn’t be a Sunny Sweeney show without the radio hit “From A Table Away” which is also one of my favorite tracks.

One of my favorite newer tracks that Sunny is playing live now is called “Poet’s Prayer” and she dedicates it to artists playing out on the road.  On this night, she dedicated it to W.D. Miller who opened up the show.  She ended the set with a great rendition of “Bad Girl Phase” from Provoked.

I highly recommend seeing Sunny Sweeney live in a setting like this while you still can.  Her stock is rising and it won’t be long before she is headlining big theater shows like Cody Jinks is.  She is actually just starting a run of opening dates for Bob Seger’s final tour.  After that, she is always on tour and you can find her current dates at https://sunnysweeney.com/.  I hope you get out to a show.