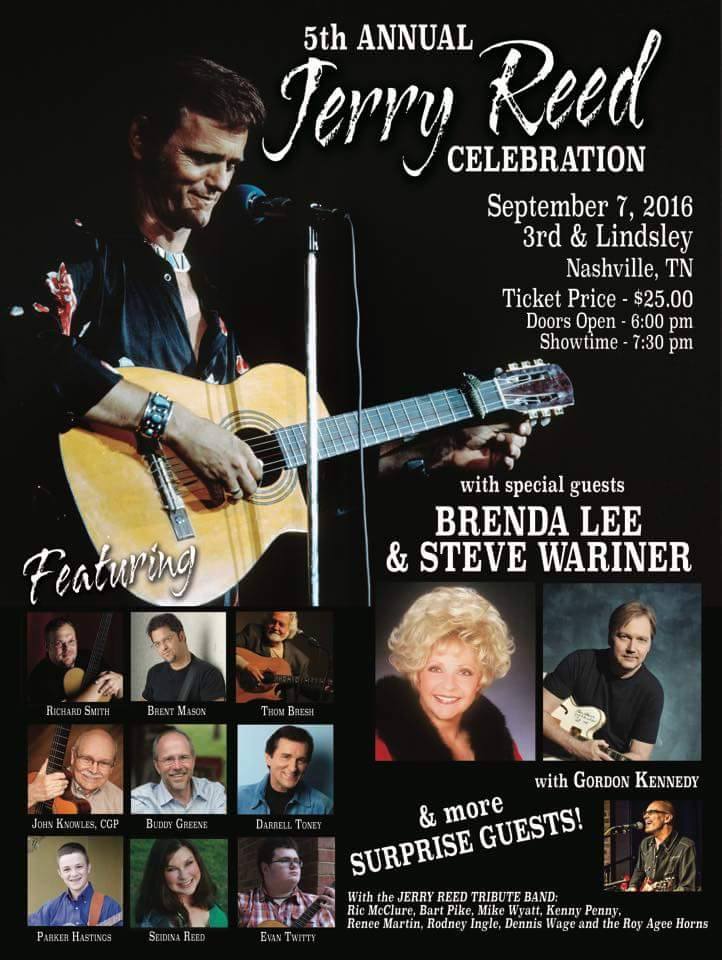 Well folks it’s time once again to help them promote the 5th Annual Jerry Reed Celebration right here in Nashville on September 7th at a truly great venue here in town 3rd And Lindsley. I mean honestly you HAVE to LOVE this bar for live music and beer even I whom usually doesn’t drink while working enjoy a beer at this place.

“If it has more than three chords it’s jazz”….yeah we all know where that quote came from…old Cledus “The Snowman” Snow himself and most notably the fastest guitar picker Nashville has EVER saw, Jerry Reed. In fact he was dubbed that by none other than one of the creators of the “Nashville Sound” era, Chet Atkins. He is rivaled only by the ever popular Lower Broadway figure Johnny Hilland who is a hell of a picker too and was rated as the top 2 fastest players. He also appeared another of the most iconic “Country Music Films” of the 1980’s Stroker Ace as he appeared as himself, hell he’s even been featured on Scooby Doo.

This tribute show contains an iconic entertainer that recorded one of his first hits in 1960 Miss Brenda Lee as she enjoyed success covering his song “That’s All You Gotta Do”. In the late 60’s and early 70’s Elvis Presley recorded many of Jerry Reed’s songs and he went on to star is many movies from what I call the “Country Music Films” back when movies were truly good. In my honest opinion Jerry Reed and Sammy Davis Jr. and Terry Bradshaw MADE movies like Smokey And The Bandit and Cannonball Run the hits they were, the cameos and sidekicks were the funniest and BEST.

This year some very wonderful entertainers will combine their talents to throw the 5th annual Jerry Reed celebration in true Country Music style. Here is a list of people included in this event as well as the Jerry Reed Tribute Band.