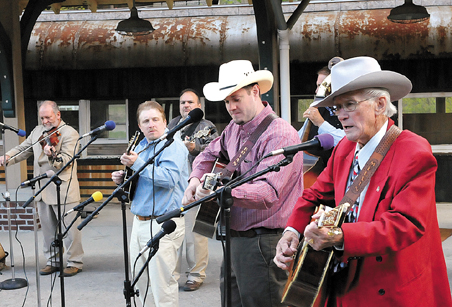 The beginning portion of 2016 has been ravaged by MANY deaths of some iconic legends of Country Music and you can read about them HERE. Sadly I have to make these articles and they will not keep coming people, as death is a part of life. But you know as long as we continue to honor our Legends within Country Music and Bluegrass they will forever live within our hearts and minds.

I’m going to continue that article now with my part 2 of the now ongoing series of the middle summer and end of summer portions of the great losses to all genres of music that my website covers. This article will cover six very important people who contributed their talents to Country Music in many different ways. I was VERY sad to see them go and I’m writing this while researching bands for a outdoor festival I’m covering in September.

I met Mr. Rich one afternoon at Mr. Kurt Fortmeyer’s house in White’s Creek Tennessee for a private party a few years back, VERY nice fellow and he contributed a LOT to Country Music. He died just recently August 5th in the evening at a hospice care facility in Nashville after a battle with cancer.

He has six top ten singles and eighteen charted singles in his fifty year career within Country Music. Since 1976 he had songs cut by George Strait, John Michael Montgomery,Clay Walker,Hank Williams Jr,George Jones,Patty Loveless,Shania Twain, and Jason And The Scorchers.

in the 1990’s he wrote “Be My Baby Tonight” and “Sold The Grundy County Auction Incident” were cut and charted for Rich Fagan as well as “Why Can’t We All Just Get A Long Neck” from Hank Williams Jr was charted on 2000. His Nashville tenure began in 1985 when Con Hunley recorded his song “Blue Suede Blues” and also Moe Bandy recorded one of George W Bush’s favorite songs “Americana” and it was embraced as his campaign song.

A few weeks ago his liver cancer became too much to bear and he was called home to Hillbilly Heaven to be rewarded and loved by his peers, we love you buddy.

Miss Bonnie was one of the three members of the Browns which included her older sister Maxine and brother Jim Ed Brown. Jim Ed Brown has recently also passed away and was the sole person to ever join the Opry as a single artist AND with a group, he also maintains a Country Music Hall Of Fame membership upon those same terms.

In 1956 the Browns were signed by RCA Victor and were active until 1967. They were invited to join the Opry in 1965 and did so, and after disbanding she did not pursue a solo career however the Browns did reunite twice, once in 1980’s and once in 2006. The Browns were one of the ones I considered pop country for their time, albeit that pop country back then isn’t as hokey and fake as it currently is today. It’s STILL the same grounds but I enjoyed most of the pop country of that period.

Pete Mitchell was one of the ever popular rotating lineup of the Texas Troubadors which was the backup band for Country Legend Ernest Tubb. He played lead guitar for E.T. for many years as did many others, some were persuaded to leave by Ernest himself to further their solo careers.

Many times on many recordings at the beginning of their solos you would hear Ernest Tubb call out their names Aw….Pete Mitchell…..which also became a well known trademark call out for them.

Melvin Goins was a hallowed Bluegrass Legend of over 60 years on the road playing for a record 5 million fans with many different bands in his time.He and his brother Ray Goins were most noted for being one of the first Bluegrass groups to come to New England, and were inducted into the West Virginia Music Hall Of Fame.

He joined the Clinch Mountain Boys around the time of Dr. Ralph Stanley’s famous fiddle guru, Curly Ray Cline and helped transition Old Time music to the then style of more modern Bluegrass. Later on he left Ralph Stanley’s band to form his own band with brother called The Windy Monutain Unit. He was one of the most active Bluegrass Legends almost months until his death.

Don Parmley is most noted for his twenty year tenure with the Bluegrass Cardinals however before his work with them he is credited with all of the banjo work on the television show The Beverley Hillbillies except for the opening theme song.

Dale Sledd played rhythm guitar with the Osbourne Brothers in their peak from 1966-1977 during which time he did contribute to one of their greatest hits “Rocky Top” which they recorded in 1967. It was written by Felice Bryant and it was one of the first Bluegrass songs to be performed with amplified instruments.

They did this until 1974 when the Opry moved from the Ryman to the new Opry house and due to the lease agreement the Bluegrass music couldn’t be amplified so they began playing Rocky Top unplugged once again. And in 1967 he left the band to begin playing guitar for Grandpa and Ramona Jones until the middle 1980’s.